Continuing my exploration of cover art, today I take a look at magazines, specifically the infamous Saturday Evening Post. But first a little history:

Advances in printing technology during the Industrial Revolution allowed for the work of talented illustrators to be reproduced with increasing quality. Early publishers focused much of their attention on the magazine’s cover, which like today, is a big selling attraction. Eye-catching covers increase circulation, and ensure the magazines continuation.

In 1897, magazine publisher Cyrus H. K. Curtis purchased the financially troubled magazine for one thousand dollars. George Horace Lorimer, editor from 1899-1936 conceived of covers featuring artwork or illustrations. His idea increased the  magazine’s advertising as well as the success of The Saturday Evening Post.

The magazine became famous for its cover artwork with humorous scenes of every day life. The illustrations connected readers intimately with the magazine and Americans would look forward each issue, in large part, for the cover.  The most famous images were created by Norman Rockwell and J.C. Leyendecker with other notable contributors such as N.C. Wyeth, Charles Livingston Bull, John Philip Falter, and John E. Sheridan.

The rise in popularity of television in the 1950’s led to a decline in circulation of the magazine. As well, its optimistic picture of  America was contrary to the changing mood of the times. The Vietnam War, the civil rights struggle, and the cold war, made Rockwell’s depiction of the United States seem unrealistic.

Following a damaging libel suit in 1967, the magazine briefly ceased its circulation. The Saturday Evening Post was revived in 1971 as  a bimonthly publication by the non-profit Benjamin Franklin Literary & Medical Society. The magazine now focuses primarily on public health issues, fitness, healthy lifestyles, as well as general interest articles.

Today, I see so many magazine covers that feature heavily photo-shopped celebrities amidst a sea of “what’s inside” cover lines that usually lead  to an article that is selling one thing or another. These covers are forgettable, perhaps so is the content.

The good news is that there are still magazines that go out of their way to produce covers that tell a story, convey an idea, and feature images that make you think – The New Yorker, New York Magazine, Time, Wired, Esquire, to name a few. It’s our challenge to sift through the thousands out there and find the ones worth reading.  Good luck. 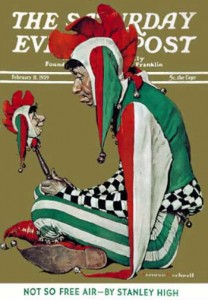 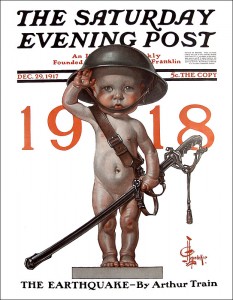