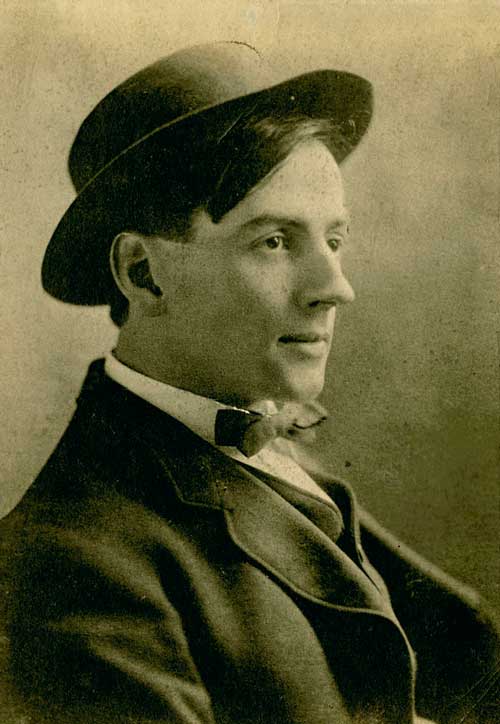 Thomas John (Tom) Thomson, arguably Canada’s most intriguing, and perhaps its most iconic artist, was born on August 5, 1877 in Claremont, Ontario, the sixth child of ten to John and Elizabeth Thomson.

The Thomson clan who moved to a farm in Leith shortly after Tom’s birth, were a musical family and at an early age, Tom played both the violin and the mandolin, as well a number of other instruments. His childhood days were spent with his eight brothers and sisters (the ninth sibling had passed away at just 9 months old) fishing, sailing, swimming, reading, dancing and playing mandolin and coronet in the village band. A favourite pastime was drawing caricatures for the amusement of his friends.

A fun-loving and pleasant child by all accounts, Tom was, as are many children of large rural families, independent and adventurous. He was apt to find his own way rather than following the constructs of the Scottish family traditions he was born into. The family farm was located beside Georgian Bay and Tom was drawn to the vast, beckoning water and rugged landscape. Though he had health issues as a child, in adulthood, the wilderness seemed to bring out his strength and stamina.

Tom had a restless start to his adulthood. Unsuccessful at enlisting for the Boer War in 1899 due to health reasons, Tom apprenticed as a machinist at Wm. Kennedy and Son’s Foundry in Owen Sound, but lasted only 8 months before he quit. Still undecided on a career, he briefly attended business school in Chatham. In 1901, he moved to Seattle, Washington to join his brother George at his business college.

George Thomson had arrived in Seattle in 1899, had studied law and then operated The Acme Business College. His brother Henry had joined George shortly after, followed by brothers Tom and Ralph in 1901. Tom studied at Acme and enrolled in penmanship, but left after six months to begin his career as a commercial artist, responsible for designing, drawing and lettering advertisements. George also attended the college, but later returned east to study at The Art Student’s League in New York. He like Tom, eventually devoted himself to painting, and exhibited his entire life.

In the gold rush town of Seattle, Tom also met and was smitten with the beautiful young Alice Eleanor Lambert, who by some accounts only giggled when the ardent young Tom proposed causing him to abruptly return home to Canada in 1905.

His first job on returning home was to work as a senior artist at Legg Brothers, a photo-engraving firm in Toronto. He acquired the strong design skills evident in his art (Northern River, 1914-1915), in the Toronto commercial art world. Thomson joined Grip Limited, Engravers, in 1909, a prominent Toronto photo-engraving house. This position proved to be a turning point in his life. Grip’s senior artist was J.E.H. MacDonald (1873–1932), who encouraged his staff to foster their talents by painting outdoors in their spare time—in the city’s ravines and the nearby countryside. Over the next three years Albert Robson, Grip’s Art Director also hired Arthur Lismer (1885–1969) and Fred Varley (1881–1969), both fresh from England, and Franklin Carmichael (1890–1945). Through MacDonald, Thomson also met Lawren Harris (1885–1970) at the Arts and Letters Club, a meeting place for men interested in literature, theatre, architecture, and art. Thomson was encouraged to paint by his colleagues, who saw an unusual and burgeoning talent in their colleague. When Robson moved to Grip’s main competitor, Rous and Mann Limited, in the fall of 1912, most of his loyal staff, including Thomson, followed him. 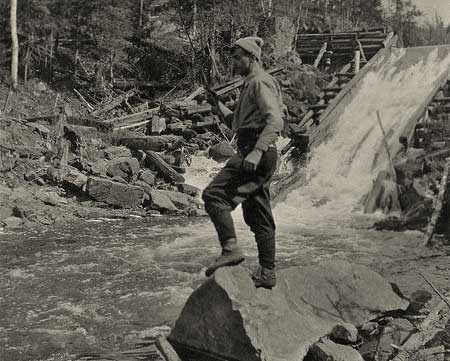 Tom’s love of the wilderness had taken him on his first visit to Algonquin Park in the spring of 1912 with a sketch kit in hand. He returned again that fall for two months. Thomson encouraged his Rous and Mann colleagues to join him, where they painted together and became known informally as the Algonquin School. Unfortunately, the progress of this informal group of artists would be interrupted by the outbreak of the First World War. They would not formally come together again until after Tom’s death to form Canada’s first national school of painting, the Group of Seven.

In May of 1913, Thomson went to Algonquin Park on his own and spent the spring and summer there. On his way back to Toronto, Thomson stopped in Huntsville and may have visited Winifred Trainor, whose family had a cottage on Canoe Lake, and who he may have spent time with in Algonquin Park. Later, she was rumoured to be engaged to Thomson for a marriage in the fall of 1917, but the records are not conclusive.

In 1913 Thomson also exhibited his first major canvas, A Northern Lake, at the Ontario’s Society of Artists exhibition. The Government of Ontario purchased the canvas for $250 a considerable sum at that time, considering Thomson’s commercial artist’s weekly salary was $35. That same year, Dr. James MacCallum, a prominent Toronto Ophthamologist and collector saw the “truthfulness” of Thomson’s early sketches and guaranteed Thomson’s expenses for a year (2014), enabling him to devote all his time to painting. MacCallum also introduced Thomson to A.Y. Jackson (1882–1974)—an artist who had recently returned from his third visit to France. Thomson would soon be sharing studios with A.Y. Jackson and then Franklin Carmichael at the Studio Building which Lawren Harris along with MacCallum were financial partners in the construction of to support a new movement in Canadian art – a new way of representing the ruggedness and wilderness of a relatively young country.

By 1914, Thomson had become enchanted with the north, preferring to spend his time fishing, painting and canoeing, sporadically acting as guide, firefighter or a park ranger (in subsequent years), in Algonquin Park, until the onset of winter would force his return to the city. He wintered in a fixed-up modest shack behind the Studio Building in the Rosedale area of Toronto. Working his sketches up into larger canvasses, he waited for early spring and the chance to return to Georgian Bay and Algonquin Park where he found a landscape which inspired him and offered the solitude he loved to paint in.

1914 was also a turning point for Thomson as an artist. The National Gallery of Canada, Ottawa, under new director Eric Brown (and advised by board member Lawren Harris), began to acquire Thomson’s work, first Moonlight, 1913–14, from the Ontario Society of Artists exhibition for $150; then Northern River, 1915, the following year for $500; and a year later Spring Ice, 1915–16, for $300. Such recognition was remarkable for an emerging, unknown artist, though the money he received was not sufficient to live on. Thomson, however, never paid much attention to managing his career. He didn’t even give titles to most of his paintings or date them.

Thomson’s work reflected his exposure to Arts and Crafts design, the work of his artist friends, and contemporary Scandinavian art, as seen by Lawren Harris and J.E.H. MacDonald in a Buffalo exhibition in January of 1913. His canoe trips resulted in many sketches of the light and seasons of Canada’s north. By late 1915, Thomson’s approach to landscape painting became more imagination-based. He often sought some natural feature corresponding to his pre-existing ideas, or painted landscapes in his Toronto studio from memory. Thomson’s design experience permeates his late canvases, which feature stylized tree branches and flat areas of strong colour (The Jack Pine, 1916-1917).

A Tragic End; An Incredible Legacy

On July 8, 1917, Thomson paddled across Canoe Lake and disappeared. His body was found 8 days later. Though ruled an accidental drowning, the cause of his death is surrounded by skepticism to this day.

When Thomson died, his iconic painting The West Wind, with its single tree bent against the strong prevailing winds, was found on his easel in his studio in Toronto. Some feel the painting is unresolved, unfinished, as was Thomson’s life. Others see it as representation of a determined, solitary spirit finding his place in the northern ruggedness of Canada. 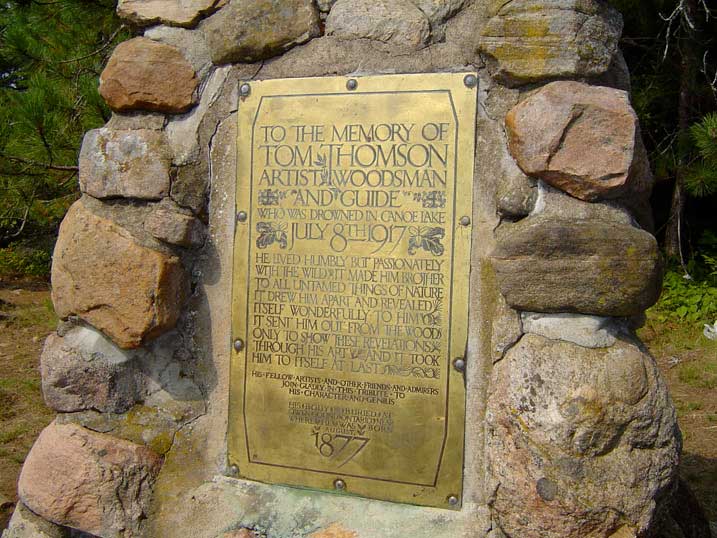 TO THE MEMORY OF TOM THOMSON ARTIST, WOODSMAN AND GUIDE WHO WAS DROWNED IN CANOE LAKE JULY 8TH, 1917

HE LIVED HUMBLY BUT PASSIONATELY WITH THE WILD

IT MADE HIM BROTHER TO ALL UNTAMED THINGS OF NATURE

IT DREW HIM APART AND REVEALED ITSELF WONDERFULLY TO HIM

IT SENT HIM OUT FROM THE WOODS ONLY TO SHOW THESE REVELATIONS THROUGH HIS ART AND IT TOOK HIM TO ITSELF AT LAST.

Thomson’s death was a tragedy for his fellow artists – they lost an inspiring colleague, a great friend and their guide to the north woods. This untimely loss prompted a clarification of their vision for Canadian art; it strengthened their resolve and gave rise to the formation of The Group of Seven in 1920. Though, Tom Thomson did not live to see the birth of the Group, his name became synonymous with the radical group of painters who would create and reflect a unique Canadian identity through painting. 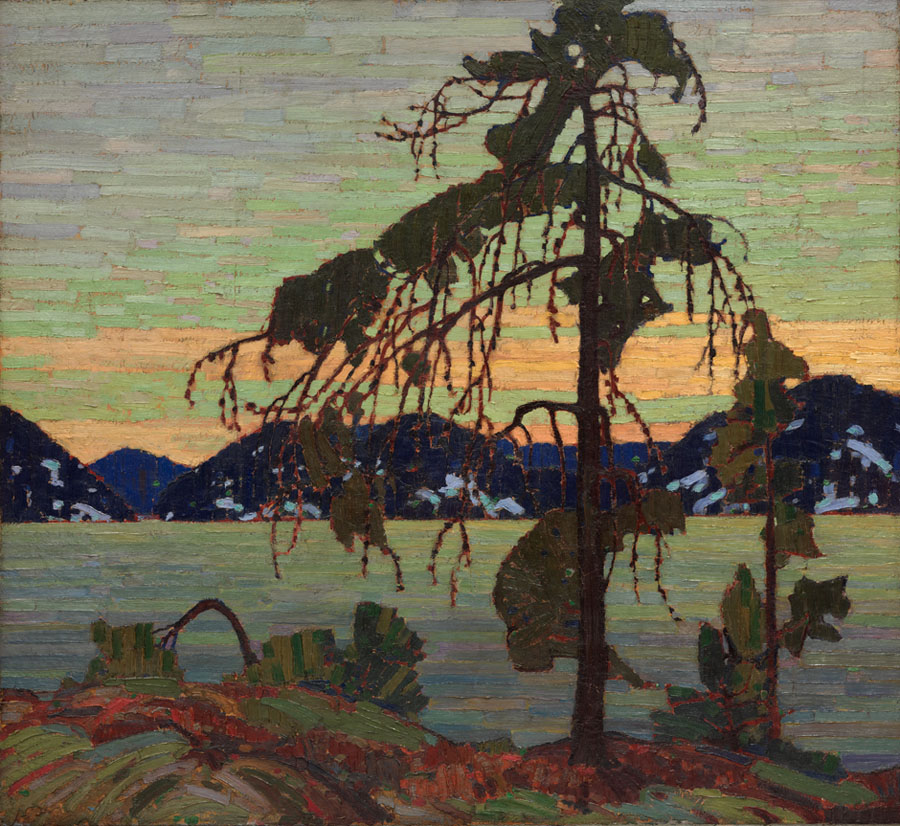 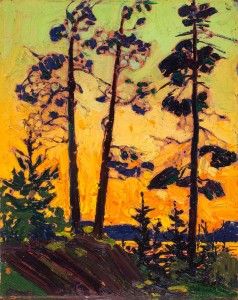 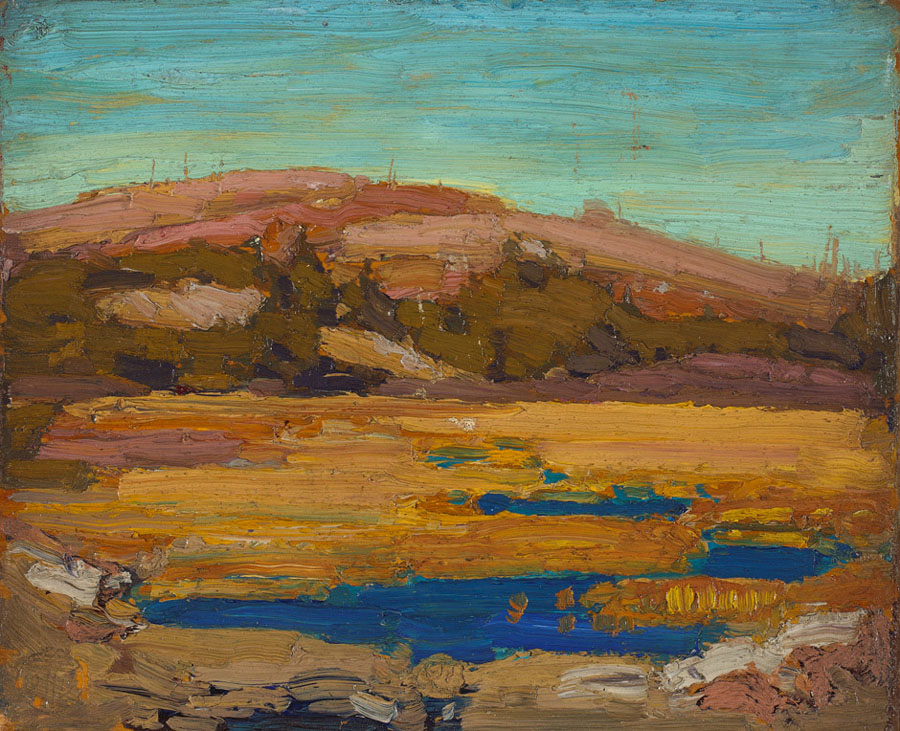 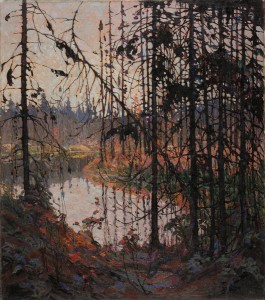 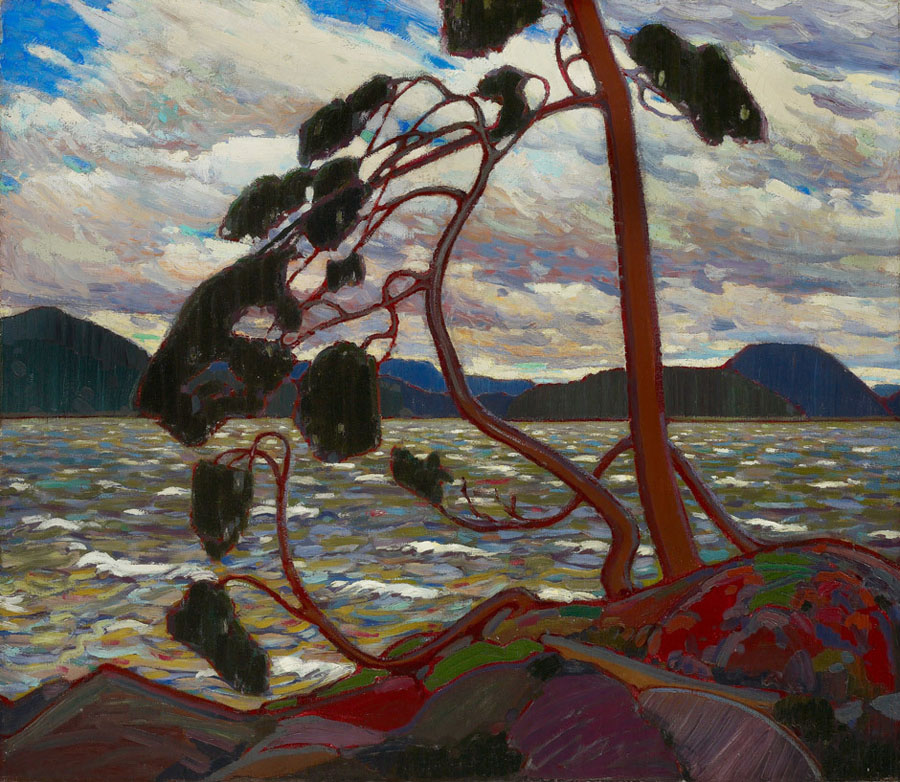 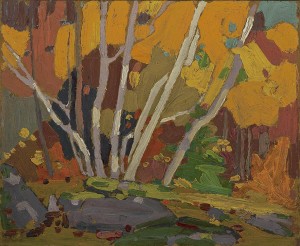 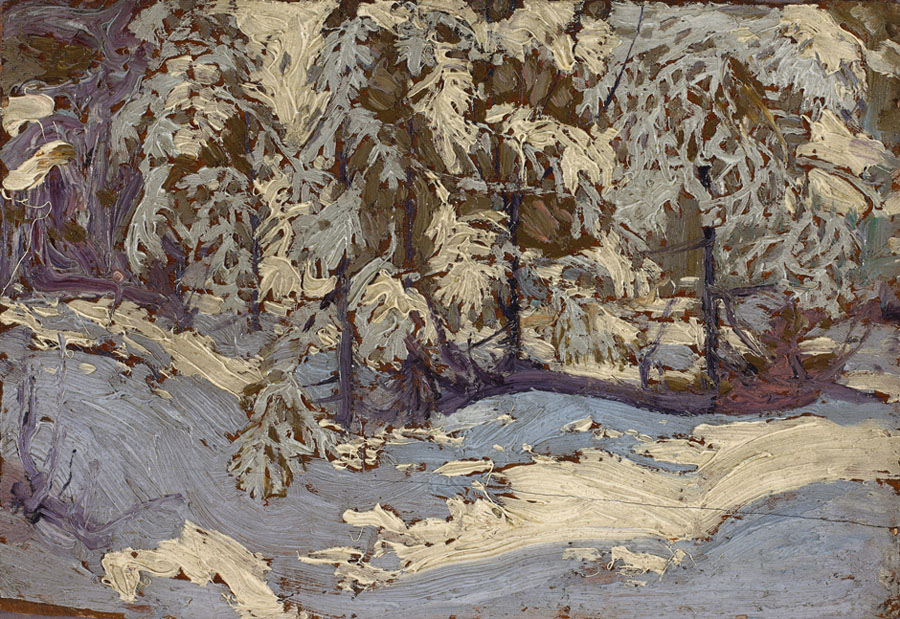 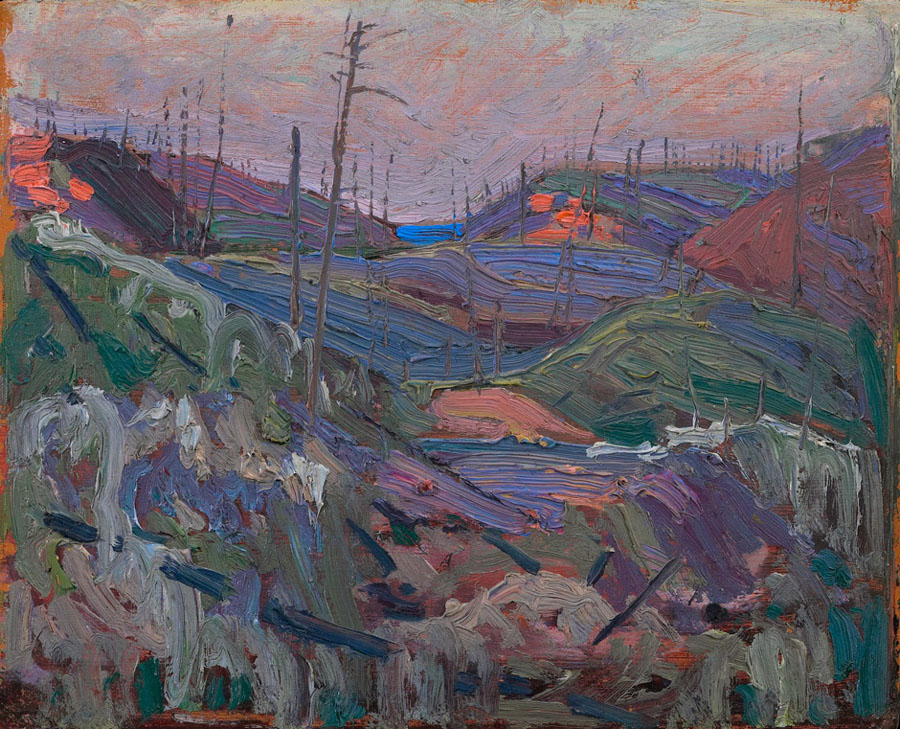 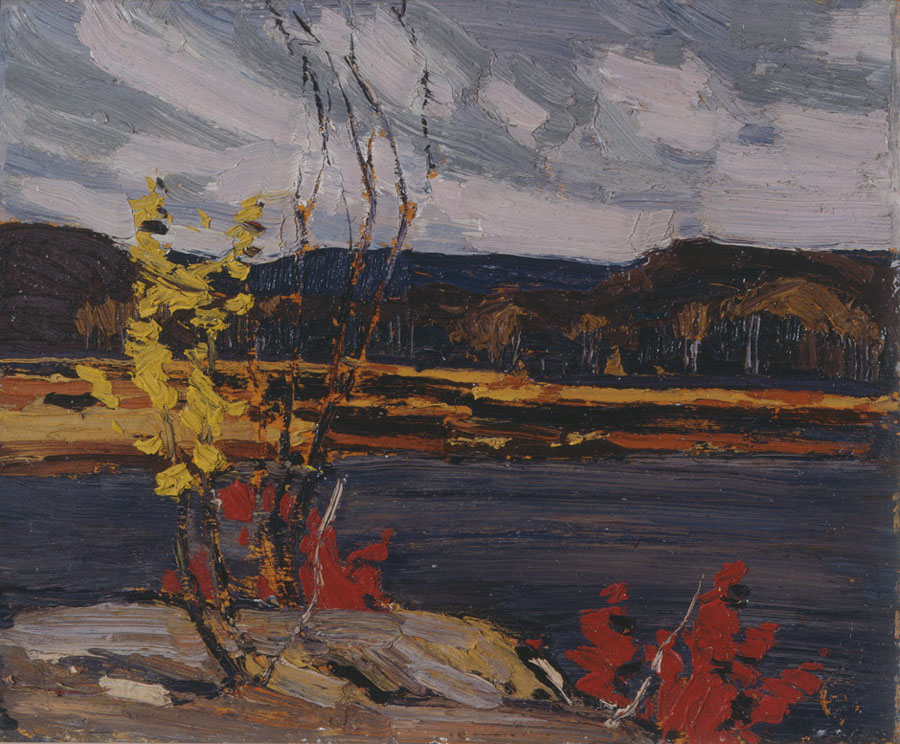 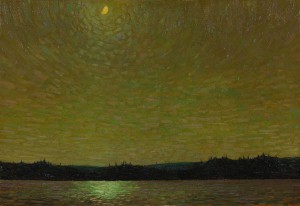 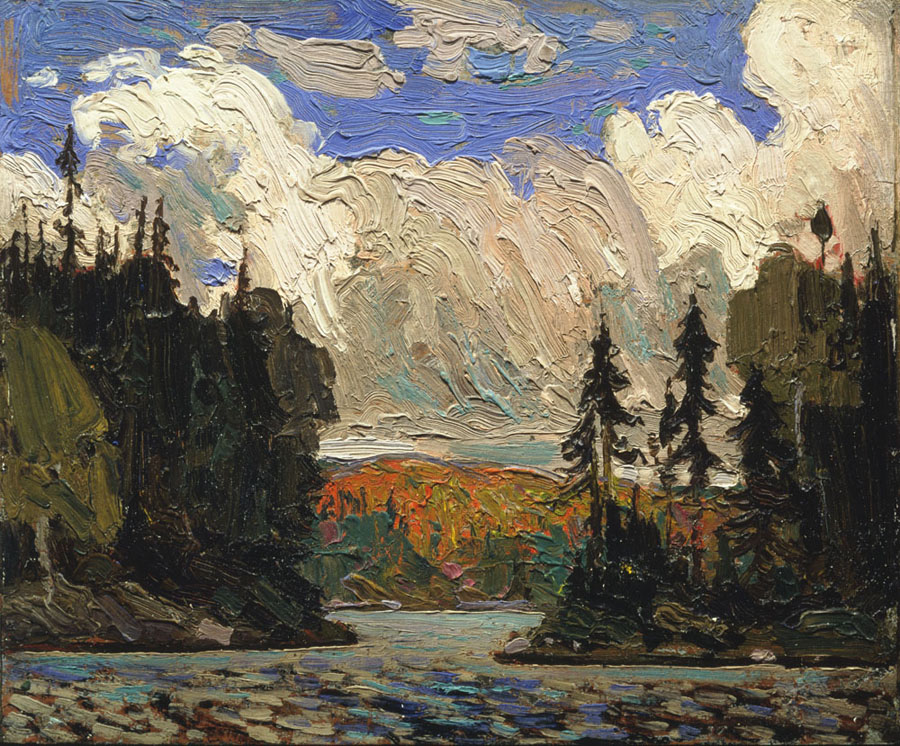 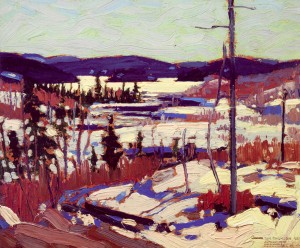 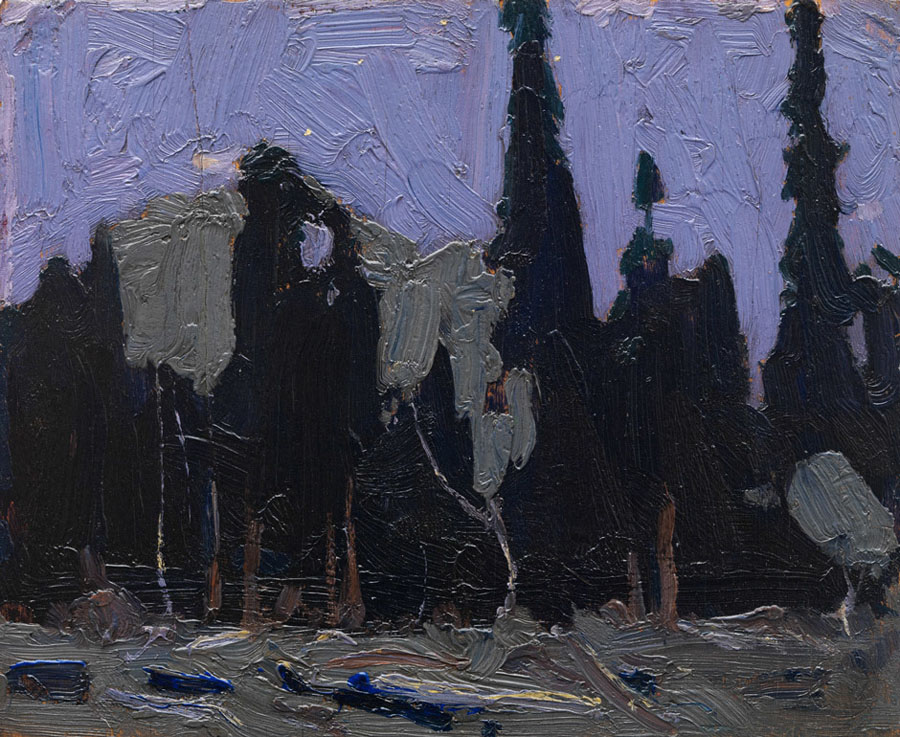 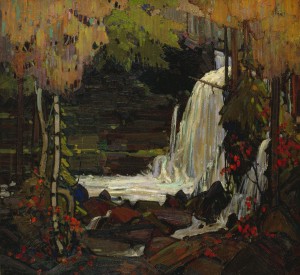 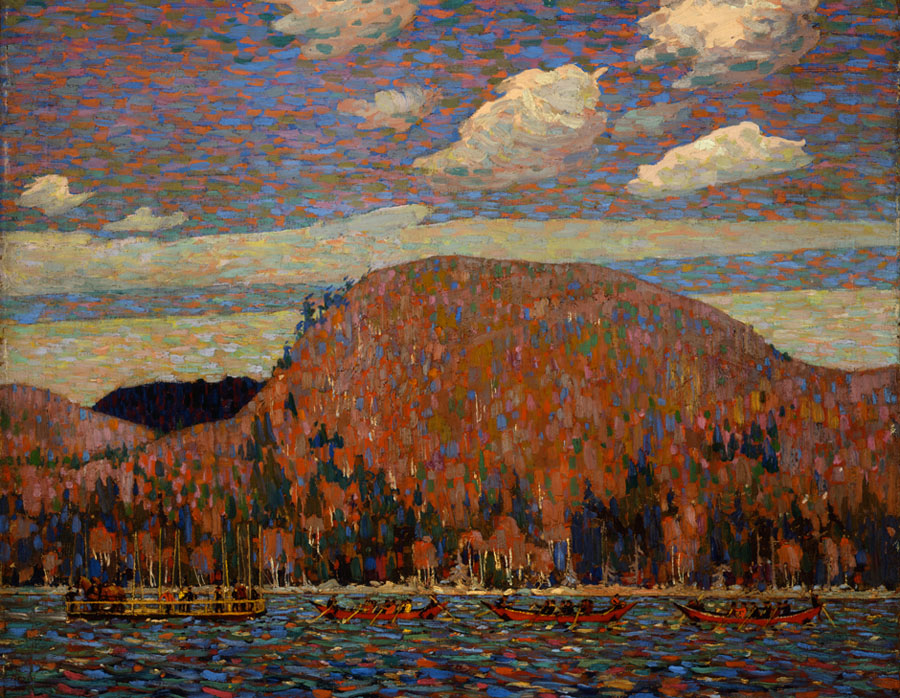