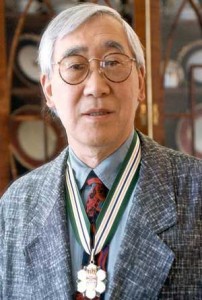 Takao Tanabe, considered one of Canada’s leading painters and printmakers, has shown work nationally and internationally for over sixty years. Though he studied in New York, Tokyo and London, it was his native area of the coast of western Canada that attracted and inspired him to move from the Abstraction painting of his youth to landscape, the painting that he has become most known for. A self-described minimalist painter, his painting and his teaching have garnered him many awards including the Order of British Columbia, the Order of Canada and the Governor General’s Award in Visual and Media Arts.

Takao Tanabe was born Takao Izumi in the small village of Seal Cove (now Prince Rupert) on September 16, 1926, the son of a commercial fisherman. The fishing village on the coast of northern British Columbia was primarily a Japanese-Canadian community and Takao spent the summers of his youth in fishing camps on the Skeena River. The family moved to Vancouver in 1937, however just a few years later, they were forced to leave their home. The 1941 Japanese attack on the U.S. at Pearl Harbor in World War II saw the Canadian government impose restrictions on Japanese-Canadians and the family was interned at a “relocation” camp in British Columbia as Japanese aliens. The young man, along with his two older siblings, were then moved to eastern Manitoba as indentured workers on a sugar-beet farm.

At the end of the war, Takao, now with the last name of Tanabe, after his mother’s family, went to Winnipeg in 1946. He began courses at the Winnipeg School of Art and also attended the University of Manitoba.

In 1950, Tanabe studied at the Brooklyn Museum of Art School in New York. His work reflected the major genre of Abstract Expressionism that was taking hold in America after World War II. He was fortunate enough to take drawing classes from Hans Hofmann, a major artist of the Abstract movement. Tanabe was to remain an Abstract painter, “using geometric shapes, flat spatial planes, perspective and bold colours in a range of mediums”, for more than twenty years. 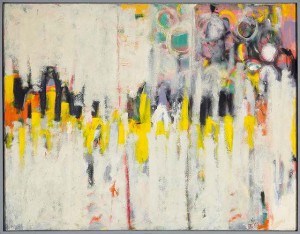 Tanabe returned home to Canada in 1952, exhibiting to good reviews in Vancouver and taking a few classes at Banff School of Fine Arts in Alberta. Over the next ten years he would have the opportunity to travel and learn different aspects of painting and art in England and Japan. In 1953, he was the recipient of an Emily Carr scholarship and was able to attend the Central School of Arts and Crafts, London, England. By 1957, Tanabe was gaining recognition and had a one-man show at the Vancouver Art Gallery, as well as exhibits across the country, and internationally – at the Bienal de São Paulo and in Milan.

Support from the Canada Council for the Arts allowed Tanabe to visit Japan in 1959, where he learned the arts of calligraphy and sumi-e (Japanese ink painting) at the Tokyo University of Arts. His new knowledge impacted his painting, and by the early 1960s he was creating Japanese-influenced ink drawings (Falling Water, 1967). 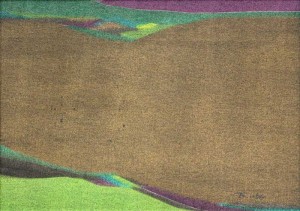 Tanabe returned to Vancouver in 1961 to teach at the Vancouver Art School and was to stay there for seven years, during which time he painted large-scale murals. In 1968, he went back to the States, working in Philadelphia and then in New York City until 1972, when an offer from Banff Art Centre in Alberta, Canada, not only brought him back to Canada but also coincided with a significant change in his work.

“After 22 years of painting abstract painting, I decided it was time to try something else…painting landscape…” he said. His week-long journey across the prairies to his new position inspired a whole series of landscape painting reflecting the flat and vast prairies. Tanabe has said that it is “simpler for my brain to think in series”, and indeed he has painted many landscape series including a series of 20 of the mountains in winter.

After seven years at Banff, and after influencing hundreds of students, Tanabe and his wife moved to Vancouver Island in 1980 where he could paint full time in a place of which he has said, “If you know B.C., you know the variety of landscapes and seascapes…islands, mountains, and valleys. It’s got a prairie-like atmosphere up in the Cariboo area…you don’t have to go look anywhere else…nothing holds a candle to the variety of views that BC offers.”

When last we checked, Tanabe still paints in his rural B.C. studio every day. His work, purely devoted to nature, explicitly without the human intervention in the landscape (railway lines, telephone poles, silos, etc.) and with the smooth finish of the artist who wants the paint to look as though it “just floated on”, has been collected by the Vancouver Art Gallery, the National Gallery of Canada, the McMichael Canadian Art Collection and many other public and private galleries. He is well known for “his transcendent light and atmosphere, which fluctuates from delicate and misty to stormy and brooding in his landscapes”, and his work appeals to collectors and is in high demand – perhaps for the meaning that Tanabe sees in the weather it depicts.

In 2000, Tanabe said in his artist statement for an exhibition of his work in B.C., “However much we desire order and clarity in all the details of our lives, there are always unexpected events that cloud and change our course. Life is ragged. The typical weather of the coast is like that, just enough detail to make it interesting but not so clear as to be banal or overwhelming. It can be a metaphor for life.” 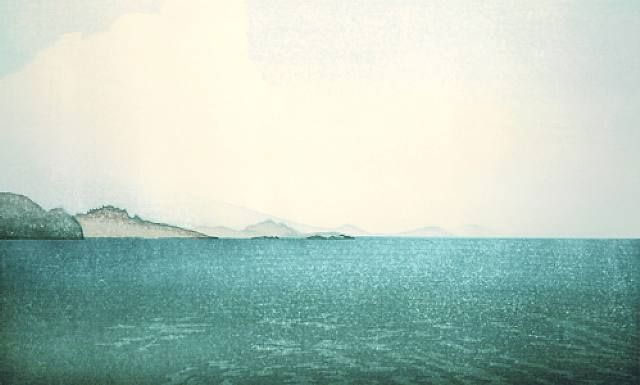 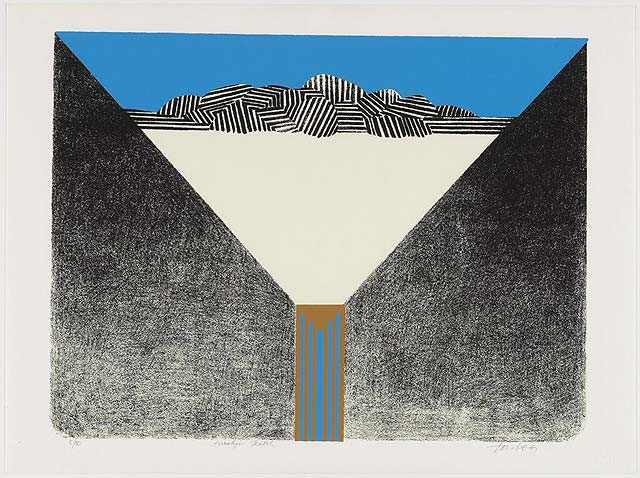 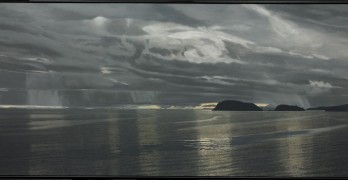 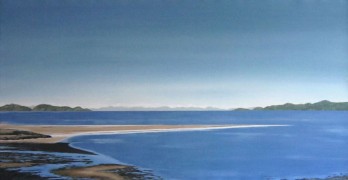 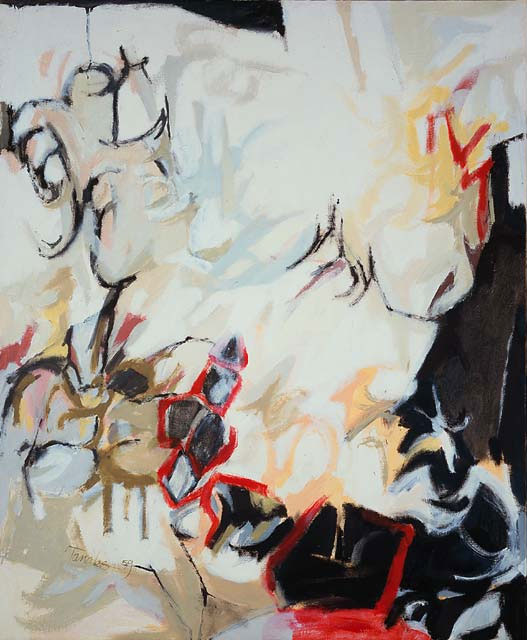 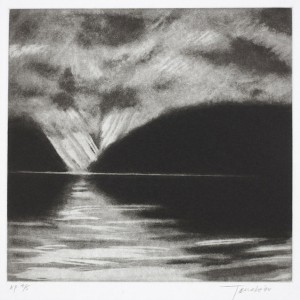 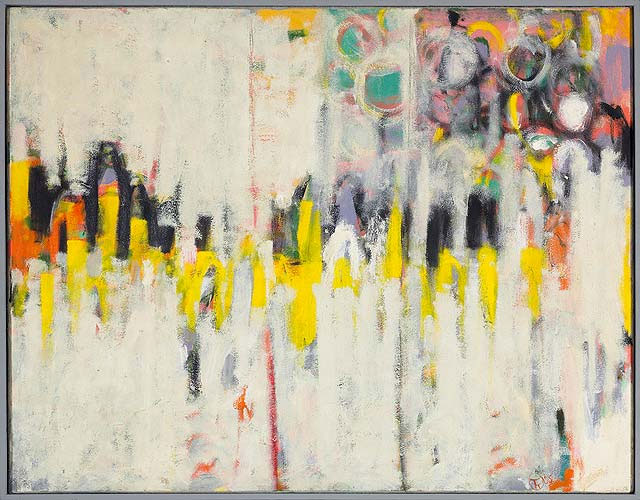 Takao Tanabe Landscape of an Interior Place 1955 National Gallery of Canada no. 6418 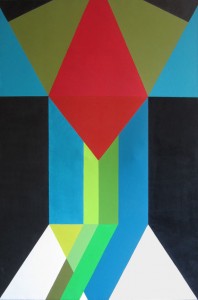 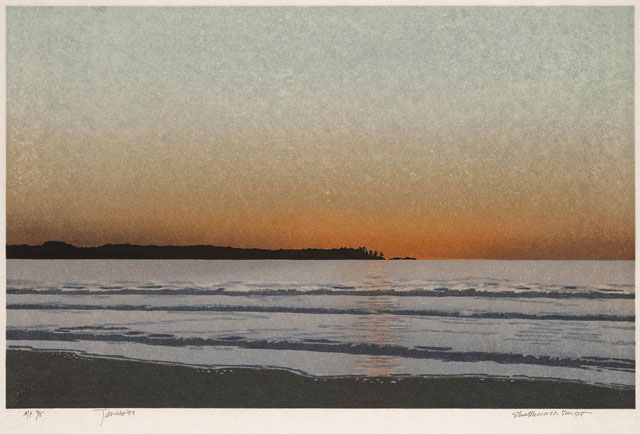 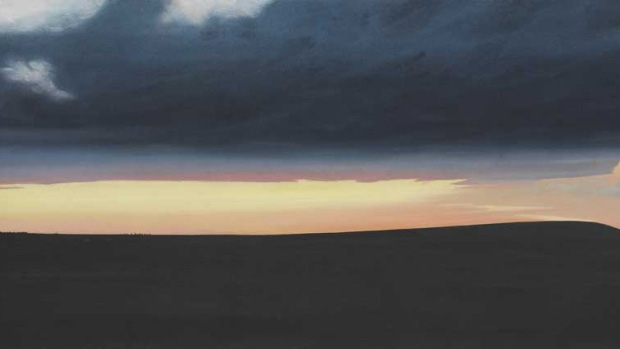 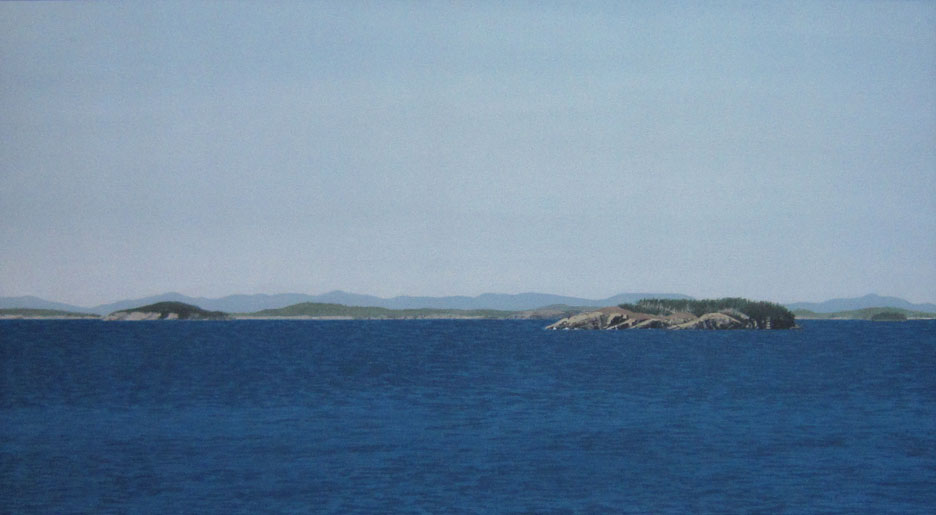