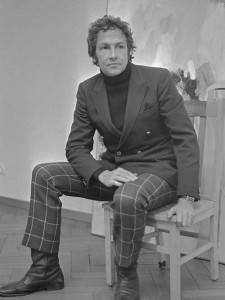 Painting relates to both art and life. Neither can be made. (I try to act in that gap between the two.) —Robert Rauschenberg (1959)

Born on October 22, 1925, Robert Rauschenberg was an American painter, sculptor, printmaker, photographer and performance artist. While never fully part of any movement, he acted as an important bridge between Abstract Expressionism and Pop art and can be credited as one of the major influences in the return to favour of representational art in the USA. (via Tate)

In the video below, artist Harry Dodge, USC Professor of Art History, Megan R. Luke and MOCA Chief Curator Helen Molesworth discuss Robert Rauschenberg’s Combines produced in the mid-1950s to early 1960s.  Combine is a term Rauschenberg invented to describe a series of works that combine aspects of painting and sculpture. Virtually eliminating all distinctions between these artistic categories, the Combines either hang on the wall or are freestanding. With the Combine series, Rauschenberg endowed new significance to ordinary objects by placing them in the context of art.

Rauschenberg died on May 12, 2008, on Captiva Island, Florida. Learn more and view images of Robert Rauschenberg’s Combines on the Rauschenberg Foundation website and at the source links below.