Born on March 6, 1475, in Caprese, Italy, Michelangelo di Lodovico Buonarroti Simoni was a Renaissance sculptor, painter, draftsman, architect, and poet. Michelangelo was thought of as the greatest living artist in his lifetime, and is considered to be one of the greatest artists of all time.

In 1488, at the age of 13, Michelangelo apprenticed with Domenico Ghirlandaio, Florence’s best fresco painter. Following that, he studied with sculptor Bertoldo di Giovanni in the Medici gardens in Florence. During this time, he was surrounded by prominent people including Lorenzo de’ Medici (known as “Lorenzo the Magnificent”), who introduced him to poets, artists, and scholars in his inner circle.

Early on, Michelangelo strove for artistic perfection in his depictions of the human body. He studied anatomy with great interest and at one point even gained permission from the prior of the church of Santo Spirito to study cadavers in the church’s hospital. It was at this time that Michelangelo began a life-long practice of preparatory drawing and sketching for his works of art and architecture.

After Medici’s death in 1492, Michelangelo left Florence, traveled to Bologna and eventually to Rome, where he continued to sculpt and study classical works. In 1498-99, the French Ambassador in the Holy See commissioned Michelangelo to sculpt the “Pietà” for Saint Peter’s Basilica at the Vatican.

In 1501, Michelangelo returned to Florence where he began work on his famous marble statue “David”. This work established Michelangelo’s prominence as a sculptor of incredible technical skill and innovation.

In 1503, Pope Julius II commissioned Michelangelo to create his papal tomb which features the famous statue of Moses. The artist worked on the tomb for 40 years, stopping often to work on other commissions including the painting of more than 300 figures on the ceiling of the Sistine Chapel from 1508-12.

From 1534 to 1541, Michelangelo produced an enormous fresco “The Last Judgment” in the Sistine Chapel. “A depiction of the second coming of Christ and the apocalypse, the work was controversial even before its unveiling because of the depictions of nude saints in the papal chapel, which were considered obscene and sacrilegious.”

From about 1516, Michelangelo began to focus his attention more on architecture. In 1534, he designed plans for the Medici Tombs and the Laurentian Library attached to the church of San Lorenzo. In 1536, he designed the Piazza del Campidoglio, and in 1546 he was appointed architect of Saint Peter’s Basilica and designed its dome. From 1561-65, Michelangelo’s final plans were for the Porta Pia, a gate in the Aurelian Walls of Rome.

More than any other artist, “Michelangelo elevated the status of the artist above the level of craftsman. His deeply felt religious convictions were manifested in his art. For him, the body was the soul’s prison. By using movement, monumental forms, and gesture to express spiritual urges, he opened up new artistic vistas in the direction of Mannerism and the Baroque.”

Michelangelo was known to be a complicated man. “Arrogant with others and constantly dissatisfied with himself, he nonetheless authored tender poetry. In spite of his legendary impatience and indifference to food and drink, he committed himself to tasks that required years of sustained attention, creating some of the most beautiful human figures ever imagined.”

“He constantly cried poverty, even declaring to his apprentice Ascanio Condivi: ‘However rich I may have been, I have always lived like a poor man’, yet he amassed a considerable fortune that kept his family comfortable for centuries. And though he enjoyed the reputation of being a solitary genius and continually withdrew himself from the company of others, he also directed dozens of assistants, quarrymen, and stonemasons to carry out his work.”

Michelangelo’s final work in marble, the “Rondanini Pietà,” was left unfinished. He died in Rome on February 18, 1564 at the age of 88. 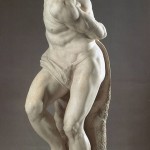 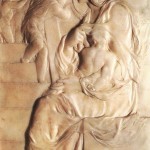 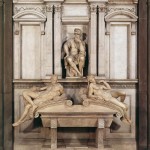 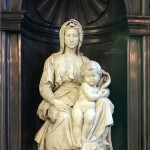 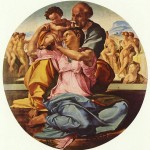 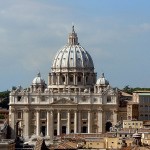 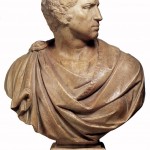 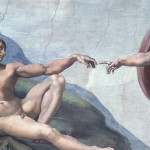 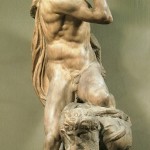 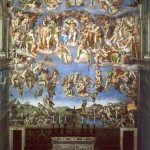 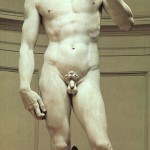 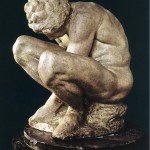 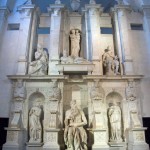 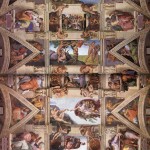 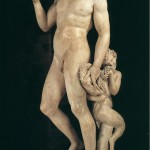 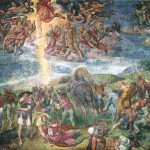 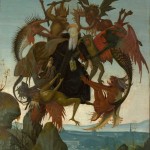