I’ve been thinking about eco-art again and am fascinated by artists who can turn trash into treasure. One of the most recognized and awarded of these is Australian artist John Dahlsen. Dahlsen studied art at the Victorian College of the Arts and the Melbourne College of Advanced Education, and for many years made his living as an abstract painter.

Dahlsen’s creative medium changed in 1997 after a day of collecting driftwood along the Victorian coastline with the aim of making furniture.  It is here where he stumbled upon vast quantities of plastic litter washed up along the shoreline.  Dahlsen was so taken in by the new palette of colours and shapes that he gathered up the trash in garbage bags and hauled them to his studio to see what could be done with this new medium.

For over ten years Dahlsen has been creating his environmental assemblage art and has garnered much recognition.  He holds regular solo and group exhibitions throughout Australia, Europe, and the United States.  In 2000, he won the prestigious Wynne Prize at the Art Gallery of NSW and was selected to be a cultural ambassador and represent Australia at the Athens Olympics of the Visual Arts “Artiade” Exhibition 2004.

As for his views on today’s environmental issues Dahlsen says, “making this art has been a way of sharing my messages for the need to care for our environment with a broad audience. I feel that even if just a fraction of the viewing audience were to experience a shift in their awareness and consciousness about the environment and art, through being exposed to this artwork then it would be worth it.” 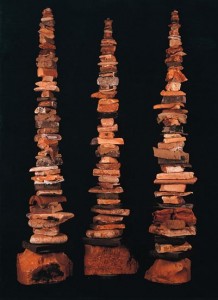 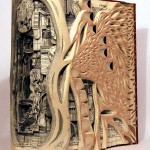 Today I Stumbled Upon the amazing work of artist Brian Dettmer.  Dettmer is known for his alteration  of old books, maps, and cassette tapes which he transforms into fine art sculptures.

Born in 1974 and raised in Naperville, Illinois, Dettmer holds a Bachelor of Fine Arts from Columbia College in Chicago.  Initially, Dettmer worked with newspaper and book pages, gluing them to canvas and tearing off pieces to create a layered work.  Today, he uses old books, first sealing them and then cutting into them to reveal images and text, resulting in  three dimensional alternative representations of the material.  Dettmer does not insert or move any of the contents, allowing the images and information to reveal themselves as his dissection takes place.

When I first came across Dettmer’s books, I had mixed feelings. Yes, his artistic results are unbelievably beautiful, but does it justify the mutilation of information, of history, of something that might be used by someone else to learn?  I asked myself – doesn’t he feel guilty? I let that idea go after reading what Dettmer had to say when asked that same question:

“Guilt is an interesting issue. I used to. There is this idea that books are sacred relics that should be cherished for eternity, as if they are the actual information, ideas and stories they contain. Most books are mass-produced and most nonfiction books become irrelevant after a few decades. Too often, we are left with dysfunctional shells that are displayed as symbols of intellect or discarded with guilt. When carving books, I like to think that I put enough energy into the piece and pull enough power out of the piece to justify my kill.”

Dettmer’s work has been exhibited around the world and is currently on display at numerous galleries in North America and Europe.  To see more of Brian Dettmer’s wonderful creations, visit his Flickr Photostream. 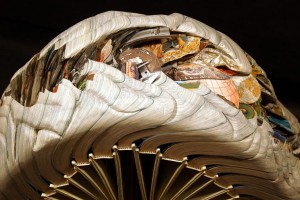 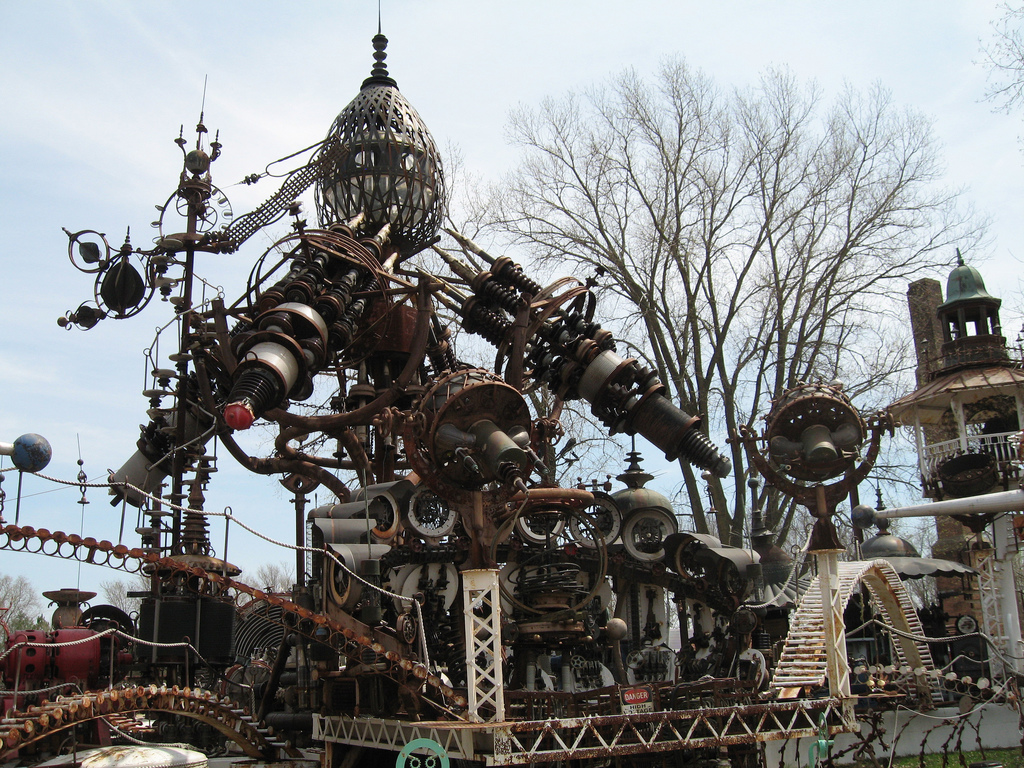 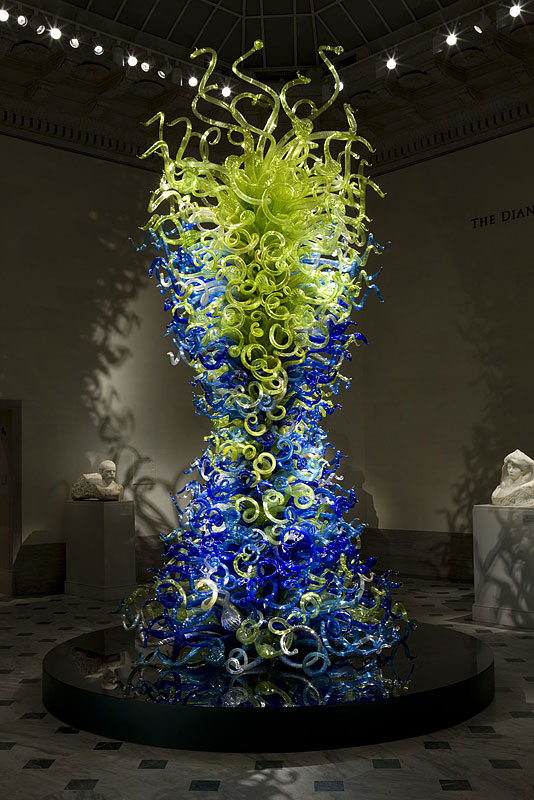 Today I stumbled upon the fantastical glass sculptures of Dale Chihuly. Chihuly was born in Tacoma Washington on September 20, 1941. He holds a Master of Science in sculpture from the University of Wisconsin-Madison as well as a Master of Fine Arts at the Rhode Island School of Design. In 1968, he studied glass in Venice on a Fulbright Fellowship and in 1971 founded the Pilchuck Glass School near Stanwood, Washington.

After an auto accident in 1976 that blinded him in one eye, and then a body surfing mishap  in 1979 where he dislocated his shoulder, Chihuly could no longer hold a glass blowing pipe and hired others to help realize his creations. In a 2006 interview with the Seatle Post Intelligencer he explains – “Once I stepped back, I liked the view,” allowing the artist to see the sculpture from more angles and anticipate problems faster. Chihuly views himself as “more choreographer than dancer, more supervisor than participant, more director than actor.”

The sculpture above is called Sea Blue and Green Tower. It stands 15 x 8 x 7’ and was on exhibit at the San Francisco Legion of Honor Museum in 2008. With so many of Chihuly’s works on display in museums and galleries around the world, and frequent exhibitions, I’m bound to bump into one sooner or later. I just hope it’s sooner. To learn more, visit his website at Chihuly.com.

Sometimes I look at a work of art and am in awe of the skill, time, and patience it must have taken to create.  When I came across Wilard Wigan’s micro-sculpture, I (who can’t see small type on a page even with my glasses) was baffled and amazed.

Born in 1957 in Birmingham, Willard Wigan has dyslexia and learning difficulties. As a boy, he was often ridiculed by teachers and classmates, making him feel worthless and small.  It was this feeling of smallness that led Wigan to micro-miniatures. At the age of five, he was fascinated with ants and sculpted houses, furniture and even clothing for them. Thus began the career of the self-taught artist.

Wigan’s work has evolved to a level that has people in the artistic and scientific worlds talking. Using a tiny surgical blade, Wigan carves figures from fragments of gold and grains of sand which are later painted with the hair of a dead fly.  His completed sculptures typically sit on the head of a pin, the tip of an eyelash, or within the eye of a needle and can only be viewed with a microscope.

To create his works Willard must enter a meditative state where he slows his pulse to keep his hands steady and then sculpts between heartbeats.  The vibration caused by external noise, or even his own breath can cause a piece of work to be damaged or destroyed.  Wigan admits once, after painstaking hours of work, to inhaling one of the characters from his Alice in Wonderland piece.

Willard’s art has been collected by the likes of Prince Charles, Elton John, and Mike Tyson, among others. In May 2007, Wigan’s 70 piece collection was purchased by tennis player David Lloyd for an undisclosed amount. Lloyd has insured the works for over eleven million pounds. Willard has also been asked to speak at the July 2009 TED.com world conference.

For more information, visit Willard-Wigan.com, or a google search will provide thousands of links to articles and videos about this amazingly intricate work.

I happened upon a great commentary from Walter Mosely on NPR a little while ago about the idea of creating your own personal pocket art collection so that you become “the curator, the critic, as well as the patron” of your own pocket art gallery.

Pocket art is not a new idea.  Miniature portraits were popular from the 16th  to the early 19th centuries where small paintings were carried as remembrances of loved ones, and paintings on personal items such as jewelry and snuff box covers. With the invention of early photography in the 19th century, however, miniature paintings fell out of popularity.

Purchasing larger works of original art is out of reach for many people and over the last several years, the pocket art movement has been making a comeback.  It has taken the form of ATC’s (Artist Trading Cards) ACEO’s (Art Cards Editions and Originals) and sculptures small enough to fit in your pocket.  Art galleries have conducted “mini-art” shows and there are even vending machines converted from retired cigarette machines that dispense small pieces of original art.

Pocket art need not be a purchased item that fits neatly into a specific genre. The choice is yours, it could be a stone that catches your eye, a leaf or flower you carry around for the day, a favourite poem – something that is meaningful to you. Whether purchased or found, pocket art is a great idea to carry as a reminder that beauty and art is present in whatever we may be doing and wherever we may go. 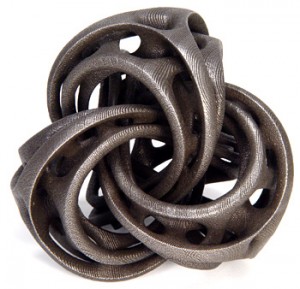