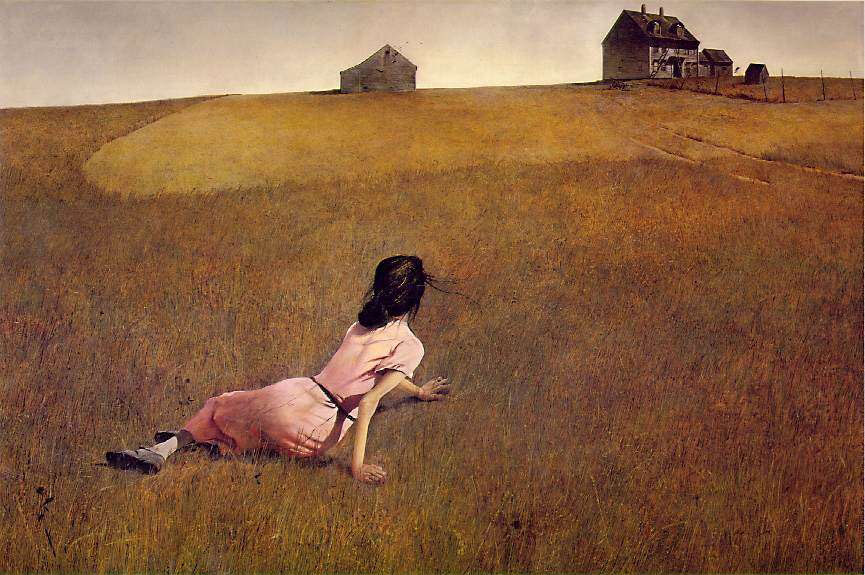 Christina’s World by Andrew Wyeth was created in 1948.  This painting  is one of the most familiar American works of the 20th century and is currently on display at the MOMA in New York.

“The woman crawling through the tawny grass was the artist’s neighbor in Maine, who, crippled by polio, “was limited physically but by no means spiritually.” Wyeth further explained, “The challenge to me was to do justice to her extraordinary conquest of a life which most people would consider hopeless.” He recorded the arid landscape, rural house, and shacks with great detail, painting minute blades of grass, individual strands of hair, and nuances of light and shadow. In this style of painting, known as magic realism, everyday scenes are imbued with poetic mystery.”  (from MOMA)

1. Art Brut (raw art) is a term created by French artist Jean Dubuffet in 1948 to describe art created outside the boundaries of the art world of art schools, galleries, museums. Dubuffet focused particularly on art by insane asylum patients. Outsider Art, coined by art critic Roger Cardinal in 1972 is a synonym for art brut but the term is applied more broadly to include numerous artists creating outside the mainstream art world including Naive art, folk art, intuitive/visionary art, and others.

2. Memento Mori is a Latin phrase translated as “Remember you must die”. It names a genre of artistic creations that vary widely from one another, but which all share the same purpose: to remind people of their own mortality. The phrase has a tradition in art that dates back to ancient Rome. Memento Mori can be seen in religious works, funeral art and architecture around the world. A version of Memento Mori in the genre of still life is more often referred to as a vanitas, Latin for “vanity”. These include symbols of mortality, whether obvious ones like skulls, or more subtle ones, like a flower losing its petals.

3. Bokeh is a term in photography used to describe the blur, or the aesthetic quality of the blur, in out-of-focus areas of an image. Originating from the Japanese word boke (blur), the English spelling bokeh was popularized in 1997 in Photo Techniques magazine. Bokeh occurs for parts of the scene that lie outside the depth of field. Photographers sometimes deliberately use a shallow focus technique to create images with prominent out-of-focus regions.

4. From 1909 – 1914, Georges Braque and Pablo Picasso worked closely together daily to develop Cubism. Both artists produced paintings of monochromatic color and complex patterns now called Analytic Cubism. By 1911 their styles were extremely similar and during this time, it was virtually  impossible to distinguish one from the other.

5. Christina’s World is a work by U.S. painter Andrew Wyeth, and one of the best-known American paintings of the middle 20th century. The woman crawling through the grass was the artist’s neighbor Christina Olson. Aged 55, Christina was crippled by polio, and “was limited physically but by no means spiritually.” Wyeth explained, “The challenge was to do justice to her extraordinary conquest of a life which most people would consider hopeless.” He recorded the arid landscape, rural house, and shacks with great detail, painting minute blades of grass, individual strands of hair, and nuances of light and shadow.