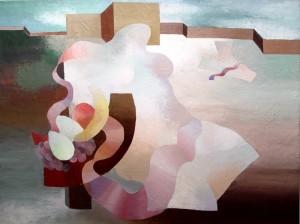 1. Edith Branson (1891 – 1976) – “Edith Branson was an American modernist painter who created her own interpretation of the multitude of avant-garde movements that blossomed in Europe and New York City in the early 20th century. She was a significant contributor to the New York art scene both through her numerous exhibitions and in the roles she served as a director of the Society of Independent Artists (1934-1940) and as one of the officers of Emily Francis’ Contemporary Arts Gallery. Branson exhibited nearly every year from 1921-1941 with the Society of Independent Artists, as well as with the Municipal Art Galleries (1938).

Most of Branson’s work is reflective of her personal life as a young woman living in the 1920’s and 1930’s. Though not autobiographical, her surrealistic works introduce a woman’s introspection into the many social changes of the day.

Branson’s early paintings were influenced by Cubism and Synchromism but expanded to include Surrealism in the 1930’s. Previously kept in family hands over the last 70 years, Edith Branson’s paintings are currently being reintroduced to American collectors. It is hoped that the reputation she acquired while active will be recaptured and that her position among many other important women artists of that era can be reestablished.” (Blue Heron Fine Art) 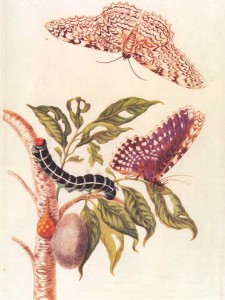 2. Maria Sibylla Merian (April 2, 1647 – January 13, 1717, Frankfurt, Germany) – was a naturalist, scientific illustrator, businesswoman, and publisher who made a significant contribution to the understanding of insects and flowers in the 17th century. Merian was encouraged to paint at a young age by her stepfather and still life painter Jacob Marrel. In 1665, Merian married Marrell’s apprentice, Johann Andreas Graff, had a child, and moved to Nuremberg where she continued to paint, created designs for embroidery patterns, and had many students from wealthy families.  It was in the gardens of the elite that she first began her study of insects and took note of the transformations, and illustrated all the stages of their development in her sketch book.

In 1675, at the age of 28, Merian published her first book “Neues Blumenbuch — New book of flowers”. One year later, she published “The Caterpillar, Marvelous Transformation and Strange Floral Food.”   In 1690, Merian moved to Amsterdam where her work attracted the attention of various contemporary scientists. In 1699 the city of Amsterdam sponsored Merian to travel to Surinam along with her younger daughter, Dorothea Maria. Merian worked in Surinam for two years, travelling around the colony and sketching local animals and plants. She also criticized the way Dutch planters treated Amerindian and black slaves. In 1705 she published a book “Metamorphosis Insectorum Surinamensium” about the insects of Surinam.

In 1715, Merian suffered a stroke and was partially paralysed but she continued to work.  She died in Amsterdam on January 13, 1717. Her daughter Dorothea published “Erucarum Ortus Alimentum et Paradoxa Metamorphosis”, a collection of Merian’s work, posthumously. 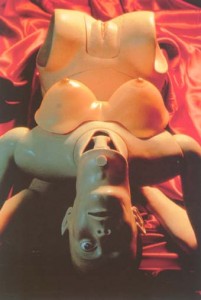 “Sherman’s photographs are portraits of herself in various scenarios that parody stereotypes of woman. A panoply of characters and settings is drawn from sources of popular culture: old movies, television soaps and pulp magazines. Sherman rapidly rose to celebrity status in the international art world during the early 1980s with the presentation of a series of untitled ‘film stills’ in various group and solo exhibitions across America and Europe. While the mood of Sherman’s early works ranges from quiet introspection to provocative sensuality, there are elements of horror and decay in the series from 1988–9. Studies from the early 1990s make pointed caricatures of characters depicted through art history, with Sherman appearing as a grotesque creature in period costume. Her approach forms an ironic message that creation is impossible without the use of prototypes; identity lies in appearance, not in reality.” (MoMA)

In 1995, Sherman was the recipient of one of the prestigious MacArthur Fellowships, popularly known as the “Genius Awards.” This fellowship grants $500,000 over five years, no strings attached, to important scholars in a wide range of fields, to encourage their future creative work. Sherman’s works are in the collections of major galleries and museums around the world including MoMA, New York, Tate (London), Museum Ludwig (Germany), Guggenheim (New York), and others. 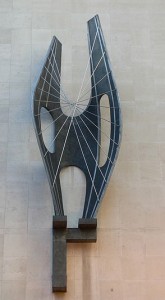 4. Barbara Hepworth (January 10, 1903 – May 20, 1975) – born in West Riding of Yorkshire, Hepworth won a scholarship to the Leeds School of Art at age sixteen where she studied with Henry Moore, and completed the two-year program in half the time. Her formal art education continued for a three-year period at the Royal College of Art under the honor of a senior scholarship. Hepworth trained in Rome  in sculpture with master stone carvers and by 1924, she was a finalist in the Prix de Rome.

Hepworth returned to England in 1926 to exhibit her work with her husband John Skeaping in their shared studio, and then in a solo exhibition at the Beaux Arts Gallery in 1928. She joined a small group of pioneer sculptors who were committed to abstraction, with whom she developed her more mature style marked by organic abstraction and innovative use of various media including string, wire and colored paint.

In 1931, Hepworth divorced and two years later married the avant-garde painter Ben Nicholson, beginning a personal and professional relationship that lasted 20 years. By the 1950’s Hepworth’s reputation grew tremendously. Her work was featured at the Venice Biennial and won the top prize at the Sao Paulo Biennial. Additionally, she held her first major retrospective exhibition, which contributed to the honor of Commander of the Order of the British Empire, receiving the rank of Dame in 1965.

In the later part of her life, Hepworth was diagnosed with cancer which left her confined to a wheelchair. Hepworth died in her studio in 1975 as a result of a fire. The studio was later rehabilitated and opened as a museum in 1976. 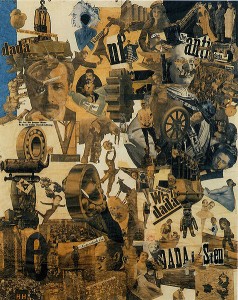 5. Hannah Höch (November 1, 1889 Gotha Germany– May 31, 1978) was a German Dada artist. She is best known for her work of the Weimar period, when she was one of the originators of photomontage. From 1912 to 1914, Höch studied glass design and graphic arts at the College of Arts and Crafts in Berlin under  Harold Bergen. In 1915, she studied graphics at the National Institute of the Museum of Arts and Crafts. In that same year, Höch began an influential friendship with Raoul Hausmann, a member of the Berlin Dada movement.  Upon completion of her studies, she worked in the handicrafts department for Ullstein Verlang (The Ullstein Press), designing dress and embroidery patterns for Die Dame (The Lady]) and Die Praktische Berlinerin (The Practical Berlin Woman). The influence of this early work and training can be seen in her later work involving references to dress patterns and textiles.

Höch’s work at Verlang working with magazines targeted to women, made her keenly aware of the difference between women in media and reality.  Many of her pieces critique the mass culture beauty industry. Her works from 1926 to 1935 often depicted same sex couples, and women were  a central theme  from 1963 to 1973. Höch also made strong statements on racial discrimination. Her most famous piece “Schnitt mit dem Küchenmesser DADA durch die letzte weimarer Bierbauchkulturepoche Deutschlands” (“Cut with the Dada Kitchen Knife through the Last Weimar Beer-Belly Cultural Epoch in Germany”), is a critique of Weimar Germany in 1919 and combines images from newspapers of the time re-created to make a new statement about life and art in the Dada movement.

Höch spent the years of the Third Reich in Germany quietly in the background. Although her work was not as acclaimed after the war as it had been before, she continued to produce her photomontages and exhibit them internationally until her death in 1978, in Berlin.