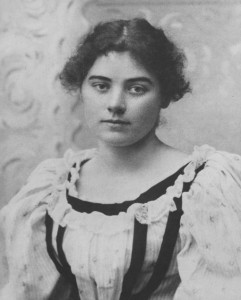 Emily Carr, Canadian artist and author, didn’t became famous until she was in her late 50s, but is now probably one of the most famous female artists of this country. Her paintings are undeniably original, as was she – a free spirit and rebel, born to a British family in the constrained Victorian era. She was fascinated and accepted by the aboriginal people of the West coast, and the intersection of her two worlds would forever impact her life and art. Like the work of the members of the Group of Seven, whom she was ultimately considered a part of, her art was unlike any that had been seen before, and it would change the face of Canadian art.

Contrary from the Start

Emily Carr was born in Victoria, British Columbia on December 13, 1871, during a freak winter storm, which seems to be appropriate. She once said that she “was contrary from the start”. She was the youngest of five sisters and had one younger brother. Her father, British by birth, became a successful business owner. The death of first her mother, and then her father when Emily was still a young girl, left her in the care of her unsympathetic and rigid older sister. Emily had always been a rambunctious child, more interested in nature and drawing than in the expected pursuits of girls of the period, and she was perplexing to her sisters.

Determined to be an Artist

Somehow Emily convinced her skeptical guardian to allow her to go to San Francisco’s, California School of Design in 1889. Three years later, she returned with a knowledge of classical art practices and set up shop as an art teacher in the Carr family home.

In the summer of 1898, Emily visited her sister Lizzie, who was a missionary in an isolated aboriginal village on the west coast of Vancouver Island. The attraction to the people was quick and mutual, and would influence Carr and her art forever. Carr was delighted by their openness and sincerity, which she found lacking in her own society. The group gave her the nickname of Klee Wyck, The Laughing One, which many years later would be the title of an autobiographical book penned by Carr.

Back in Victoria, an unwanted engagement offer (her belief was that marriage and art for a woman could not co-exist), and an unreciprocated love would cement Carr’s path as a single woman, living for her art. Carr decided to continue her studies in England at the Westminster School of Art and in private studios, learning 19th century British watercolour techniques and style. After five and a half years, she returned disappointed, but was very happy to be back in her beloved Western Canada.

Her family was equally disappointed, but for different reasons. They saw that her time in Britain had done nothing to quell her rebellious spirit or her avant garde behaviour. In 1910. she travelled with her sister Alice to Paris for further study. This time however she was not disappointed and was inspired by “the Post-Impressionist style with a Fauvist palette”. “She developed her own bold, colourful, post-impressionist style of painting, which she brought back to Victoria in 1912.”

The Draw of the Indigenous People

Having earlier seen the impact of the white settlement spread in British Columbia on the aboriginal way of life, Carr “had announced that she wanted to document the villages and the art of the people”. She spent six weeks travelling north to the Queen Charlotte Islands and the Skeena River, and capturing her observations of the Haida, Gitksan and Tsimshian totems and life.

However, her paintings, which were supposed to be an attempt to truthfully document the situation, were heavily influenced by her “French style” and were brilliantly coloured and ultimately seen as inaccurate. The provincial government, who she had thought would be interested in her work, was not. “Painted in 1912, her richly coloured War Canoes, Alert Bay would not have looked out of place alongside the paintings of Matisse and Derain in the Salon Fauve in Paris.”

By 1913, Carr had amassed a significant number of works, but her depiction of colourful trees, and magical landscapes with totem poles were also not well received by the public. She was forced to look for another way to support herself. For almost fifteen years, she gave up her artwork and built an apartment house, which she was then forced to turn into a boarding house due to the faltering of the economy at the time.

She rarely painted during these hard years and her reputation as an eccentric was intensified by her “odd behaviour” including owning a pet monkey who was her constant companion, the odd netting that she wore on her head, her living room chairs held in the air by a pulley system, and her menagerie of various other animals. It wasn’t until the 1920s that she started painting again.

Her bold and energetic paintings were ultimately not to remain unappreciated. In 1927, Carr was invited by the National Gallery of Canada to participate in the exhibition of West Coast Aboriginal art. Carr attended the opening and met the group of artists that would finally give her the feeling of belonging that had been absent all of her life. Lawren Harris, and other members of the Group of Seven, were shaping a new direction for the art of Canada, one that she understood and felt a great affinity for. Lawren Harris, as he had with other unique artists, took Emily into the fold and provided mentorship and support. Theirs was a relationship that would last a lifetime. The next ten years would be her most prolific period of painting, and would also see the formation of a new, more inclusive group of artists called the Canadian Group of Painters.

“Carr began to paint the bold, almost hallucinatory canvases with which many people identify her – paintings of Aboriginal totem poles set in deep forest locations or the sites of abandoned Indigenous villages. After a year or two she left Aboriginal subjects to devote herself to nature themes. In full mastery of her talents and with deepening vision, she continued to produce a great body of paintings freely expressive of the large rhythms of Western forests, driftwood-tossed beaches and expansive skies, like Indian Church (1929), Loggers’ Culls (1935), and Heart of the Forest (1935).”

In 1937, Carr suffered her first of many heart attacks, and as a result of her physical limitations she stopped painting, turning to writing as a gentler expression of her creativity and perspective. Her first book, Klee Wyck, a collection of short stories based on her experiences with Aboriginal people, was published in 1941. However, passages about native people’s positions, and Carr’s support of them, were censored and never appeared in print. The book won a Governor General’s Award, and sections of it were read over the CBC radio, positioning Emily Carr as a well-known Canadian author. She wrote four other books, two of them published posthumously, that have been printed in more than 20 languages.

Emily Carr died in Victoria on May 2, 1945, after checking herself into St. Mary’s Priory to rest. Amazingly, a Victorian woman, blazing her own trail at a time when art as a career for women was unfathomable, succeeded in depicting the primordial forests and coasts of British Columbia, Canada in such a way that more than 60 years after her death, her paintings are at the forefront of Canadian art, at home and abroad. 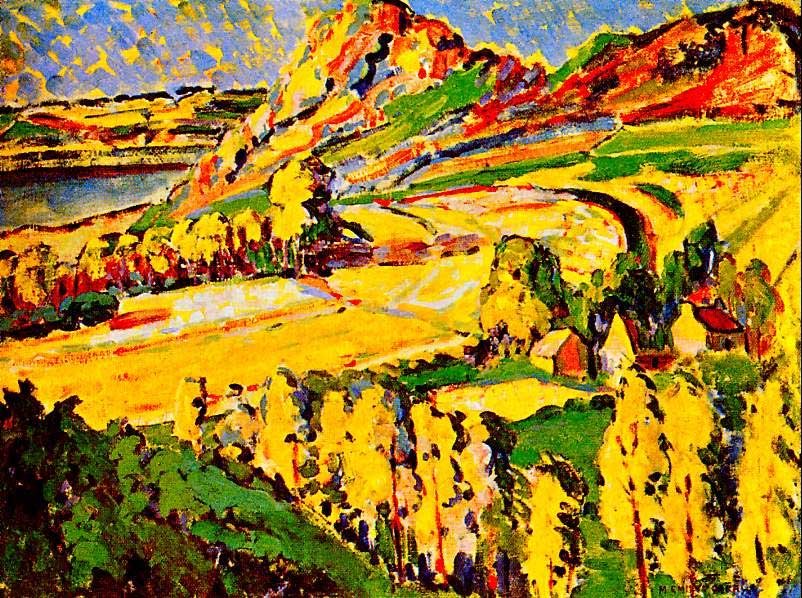 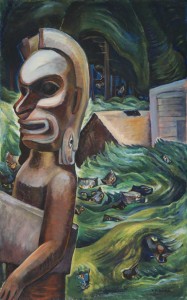 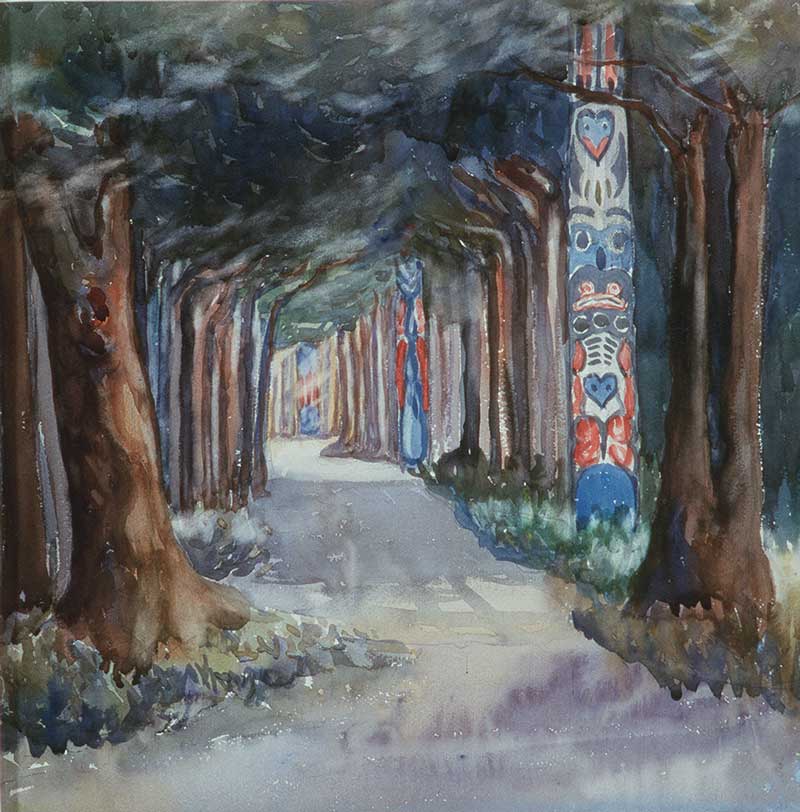 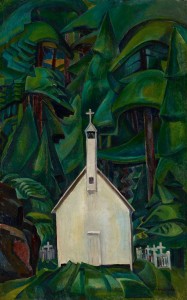 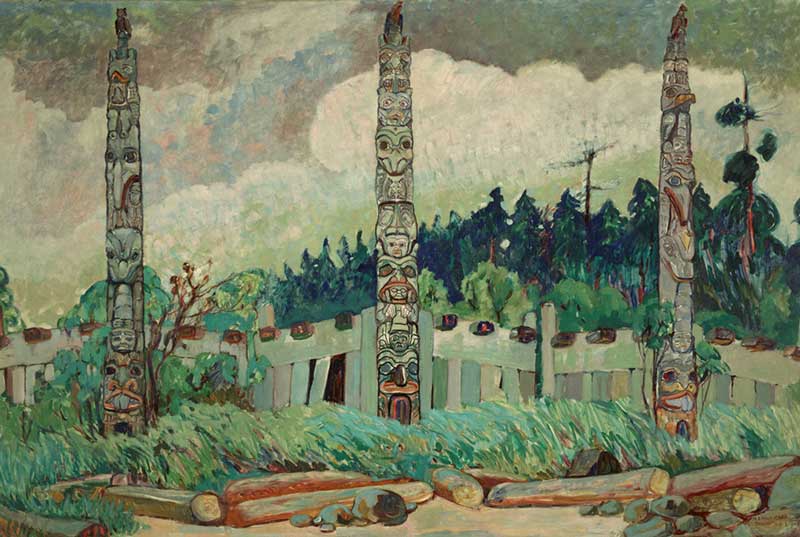 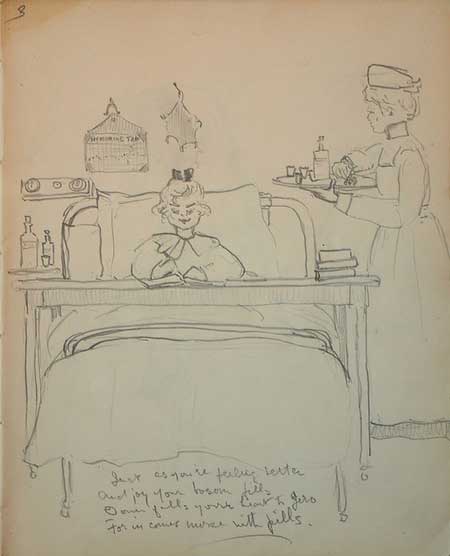 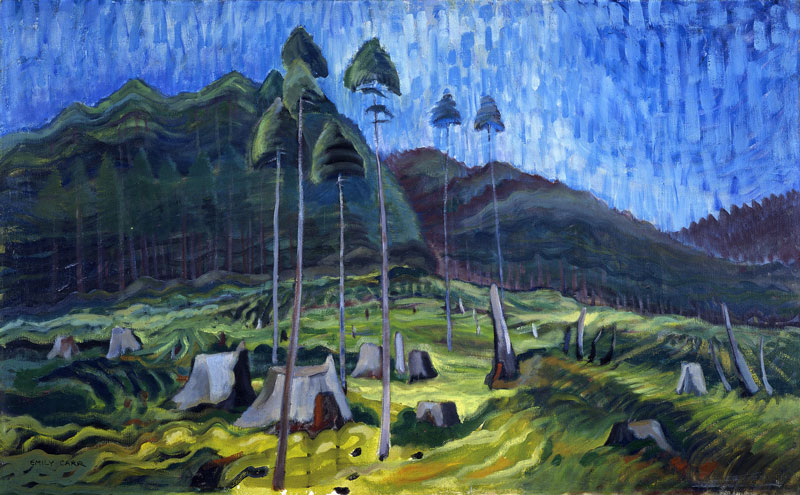 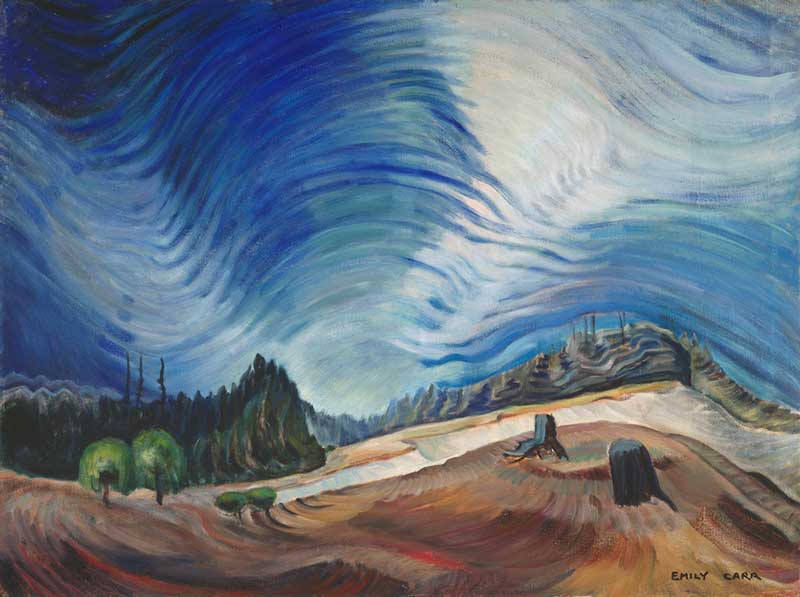 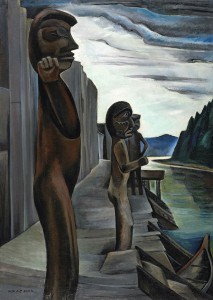 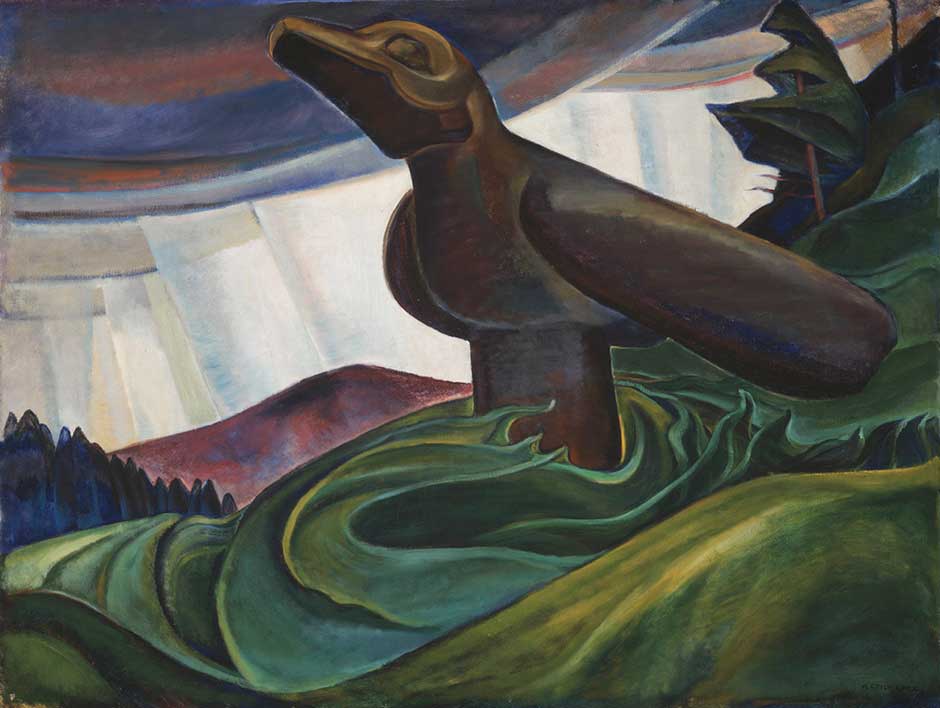