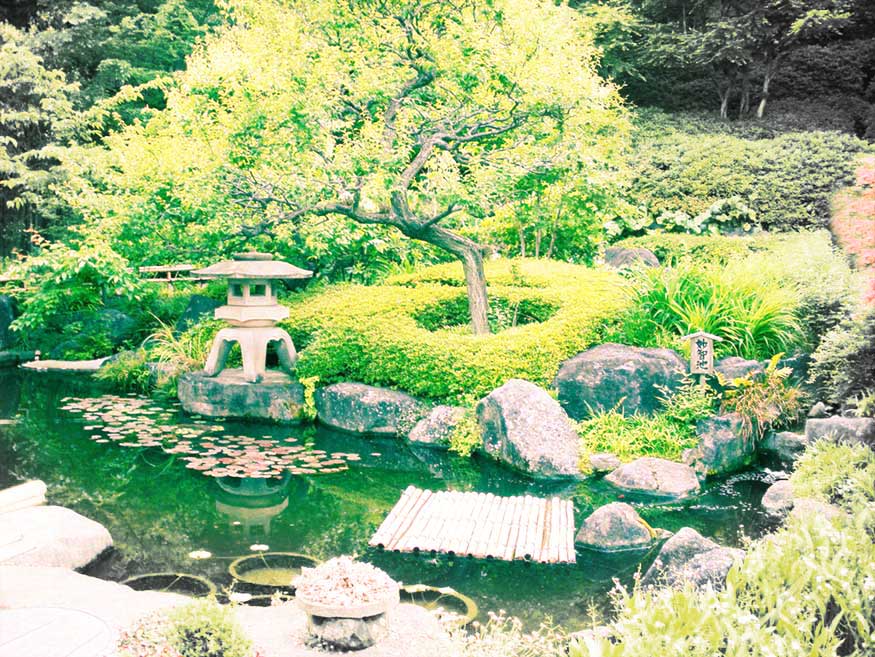 Living in Tokyo often means crowding into packed subway cars, being herded down busy city streets, and listening to an array of noises coming at you from all directions.  In all the chaos, it’s nice to know there is somewhere I can go to escape this barrage of the senses and regain a sense of calm.  That place is the Japanese garden (Tsukiyama Gardens) found in many parks and historical sites around Japan.

In Japanese culture, the garden is considered one of the highest art forms and its beauty is achieved through the composition of its plants, rocks, sand, and water, all arranged in harmony with the surrounding natural landscape.  Garden components are often chosen for their artistic shapes and are used to represent ponds, islands, boats, seas, rivers, and mountains.

Japanese gardens are not only aesthetically pleasing, but are inspired by Japan’s two main religions – Shinto and Buddhism.  Historically, the Japanese have regarded places surrounded by trees and natural rocks as sacred grounds – the dwelling places of the gods.  As Buddhism entered Japan, it also found it’s way into garden design as representation of the Buddhist vision of paradise and later as the symbolic expression of the entire universe in a limited space.

Walking into a Japanese garden is like stepping out of reality and into a well thought out painting. The colours and composition are noticed but not contrived.  An energy surrounds us that is powerful yet unobtrusive. The garden visitor is a subject in the painting, and for a brief moment in time, becomes a part of a very unique and special work of art.