In my continuing quest to keep on top of all things in the visual arts, starting this month, I will post an end of month review of art news that I found particularly interesting. So, without further ado, here are ten of July’s top stories.

Dutch Arts Official On The Lam After Embezzling Millions: “The former head of finance for the Dutch  Foundation for Visual Arts, Design and Architecture (BKVB), is the subject of an international police hunt after the discovery that he had siphoned around €15.5m from the organisation’s accounts.” Read The Art Newspaper. article.

Gallery in Wikipedia Legal Threat: “The National Portrait Gallery is threatening legal action after 3,300 images from its website were uploaded to online encyclopaedia Wikipedia. A contributor to the popular site, Derrick Coetzee, breached English copyright laws by posting images from the gallery’s collection, the NPG said”. Read BBC article.

Damien Hirst Designs Lance Armstrong’s Tour Bike: “Lance Armstrong may make at least $4 million for charity by selling the Damien Hirst-decorated bike he’ll use to complete the Tour de France at the weekend, as well as works given by Richard Prince, Ed Ruscha and other artists.”  Read Bloomberg article.

Obama Art Book: – “If you just can’t get enough Obama art — you’re in luck. This fall, Abrams Image will publish Art for Obama: Designing Manifest Hope and the Campaign for Change, a book chronicling art inspired by the 44th president.” Read more at ART INFO.

‘Almost Indescribable’ Collection Given To Virginia Museum: “A major family collection of German Expressionist art “so rare that it is almost indescribable” has found a permanent home at the Virginia Museum of Fine Arts. The gift-purchase of the Ludwig and Rosy Fischer Collection brings to the museum more than 200 pieces of art from the most creative years of German Expressionism. “Read Richmond Times article.

Tyeb Mehta: July 2, 2009 – “Tyeb Mehta, one of the most celebrated of India’s Modernist painters, whose work broke auction records even as he maintained a frugal and reclusive life, died Wednesday in Mumbai, his home city. He was 84.”  Read NY Times article.

Dash Snow: July 13, 2009 – “Artist Dash Snow died of an overdose on July 13 at the Lafayette House in the East Village…Snow was, a jokester, a jailbird, a thief, a freak, a successful art-brut savage, a doting father, a retired writer of graffiti and the latest incarnation of that timeless New York species, the downtown Baudelaire.” Read NY Times article. 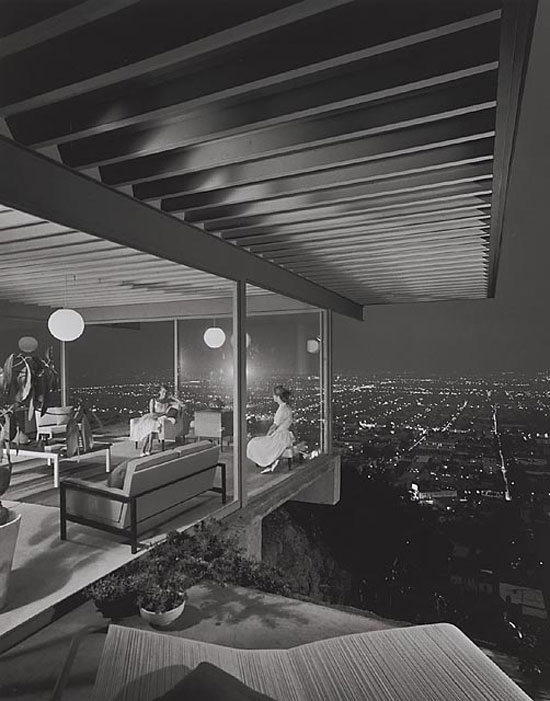 Today’s image is in honour of photographer Julius Shulman who passed away this week on July 15th. Shulman is believed by many to be the greatest architectural photographer in history, elevating a commercial genre to a fine art.  The photograph shown above is called Case Study House No. 22 and is one of the most famous architectural pictures ever taken.

To learn more about Julius Shulman, visit Wikipedia where you will find a number of links to photo archives and biographical information.