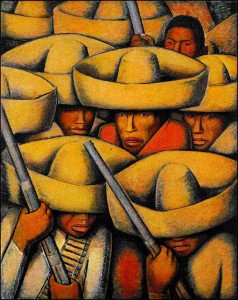 Contrary to popular belief, Cinco de Mayo is not Mexico’s Independence Day. It actually commemorates the victory at the battle of Puebla of an outnumbered Mexican militia over French forces on May 5, 1862. The day is really not all that popular in México (other than in the state of Puebla), but has been celebrated for over 100 years in the U.S. and has become  a celebration of Mexican heritage and culture.

Since we are celebrating all things Mexican today, let’s take a look at the painter Alfredo Ramos Martinez.  Born on November 12, 1871 in Monterrey, Mexico, Martinez is considered the founding father of modern Mexican art.   He studied for eight years at the Academia Nacional de Bellas Artes in Mexico City but was dissatisfied with the school’s monotonous teaching method, preferring to paint scenes from ordinary life.  In 1897, Martinez traveled to Paris and continued his studies embracing the Post-Impressionist style.  He returned to Mexico in 1910 and three years later was appointed Director of the National Academy.  Martinez began Open-Air Schools that focused on the Impressionist concept of painting the outdoors. His program influenced both the theoretical and practical approaches to painting in Mexico, expanding the reach of arts education to a more diverse range of people.

Martinez and his family moved to Los Angeles in 1930, seeking medical attention for his daughter who was born with a bone disease.  The works he produced in California were modern but focused on themes of the Mexican renaissance. Martinez’s work was well received and he was commissioned to paint public murals in California and Mexico, and held numerous exhibitions.

From 1942 to 1945 Martinez lived again in Mexico, where he painted a series of frescos.  In 1945 he returned to Los Angeles to paint a mural at Scripps College.  Martinez sketched the entire mural and painted a section of it but then became ill.  He died of a heart attack on November 8, 1946, leaving the mural unfinished. Today, Martinez’s paintings are in high demand and at a 2007 Christie’s auction, his “Flowers of Mexico” sold for just over 4 million dollars.