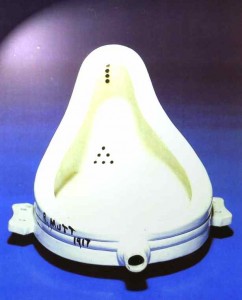 Henri-Robert-Marcel Duchamp was born to a family of artists on July 28, 1887, near Blainville, France. Three of his siblings were successful artists and Duchamp was the grandson of painter and engraver Emile Nicolle.

From 1904-05, Duchamp studied painting at the Académie Julian but by his own admission, preferred playing billiards. His early works were influenced by the Post-Impressionist style however in 1911, Duchamp developed his own form of Cubism that combined earthy colours, mechanical forms and the depiction of repetitive images of objects or bodies in motion.  Perhaps the most well known in this style was his 1912 painting “Nude Descending a Staircase” that was shown at the Salon del de la Section d’Or and later created  great controversy at the 1913 Armory Show in New York.

After 1912, Duchamp rarely painted, preferring instead to create his own brand of art which he coined “readymades”.  Readymades were one or more ordinary everyday objects that were slightly altered then signed by the artist. Duchamp’s earliest readymades included “Bicycle Wheel” (a wheel mounted on a wooden stool), a snow shovel called “In Advance of the Broken Arm”, and a urinal titled “Fountain” that he signed “R. Mutt”.   Of his own readymades, Duchamp spoke of how using prefabricated objects freed him from the ‘trap’ of developing a particular style or taste.

In 1915, Duchamp traveled to New York, where he associated with patron and artist Katherine Dreier, and artist Man Ray, with whom he founded the Société Anonyme in 1920, and other avant-garde figures. Between 1915 and 1923, Duchamp created his most complex work “The Bride Stripped Bare by Her Bachelors, (aka The Large Glass)” which was constructed of two panes of glass with materials such as lead foil, fuse wire, and dust.

In 1918, Duchamp took a break from the New York art scene and traveled to Buenos Aires, Argentina, where he became fascinated with and played chess for nine months. Duchamp returned to Paris in 1919 and associated with the Dada group. In New York in 1920, he made his first motor-driven constructions and invented Rrose Sélavy, his feminine alter ego.

Duchamp returned to Paris in 1923 and appeared to have abandoned art for chess but did in fact continue his artistic endeavors. From the mid-1930s, he collaborated and exhibited with the Surrealists. In the 1940s, he associated and exhibited with the Surrealists in New York, and in 1946 began “Etant donnés,” a major assemblage piece which he secretly worked on for twenty years.  In 1942, Duchamp settled permanently in New York and became a United States citizen in 1955. In 1954, he married Alexina “Teeny” Duchamp whom he had met in Paris in 1923.

Duchamp’s influence on the art scene was relatively small until the 1950’s when young artists such as Rauschenberg and Jasper Johns, seeking something beyond Abstract Expressionism, “discovered” his work. Duchamp gained international public recognition in the 1960’s with his first retrospective exhibition at the Pasadena Art Museum in 1963, a large exhibit at the Tate Gallery in 1966, and showings at the Metropolitan Museum of Art and the Philadelphia Art Museum.

Marcel Duchamp died on October 2, 1968 in Neuilly-sur-Seine, France, and is buried in the Rouen Cemetery. He is considered by many to be the single most important influence on the formation and direction of Pop Art, Minamalism, and conceptional art of the 1960’s and 70’s. As well, his idea of the “readymade” forever altered our understanding of what constitutes a work of art.

For a complete biography of Marcel Duchamp, see the sources links below.