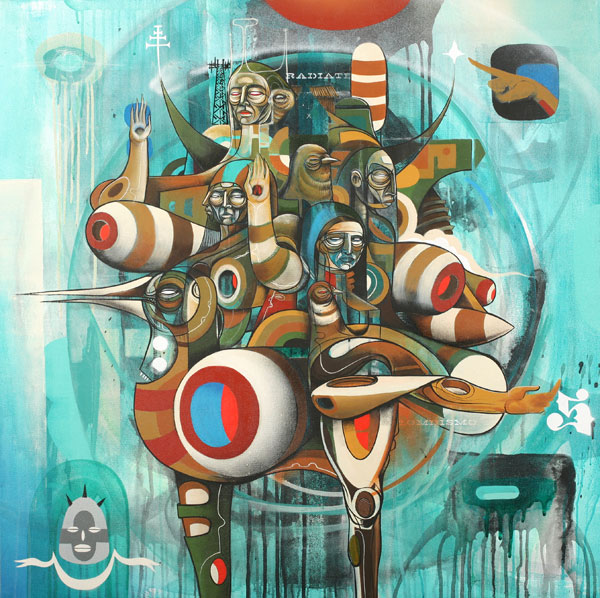 “Green was born and raised in the upper west side of Manhattan, New York City and was one of the pioneers of the Hip-Hop culture. He first started writing graffiti in his neighborhood in 1974, and started painting subway trains in 1976. The following year he joined the Rock Steady Crew. The Rock Steady Crew were pioneers of a new style of dance known as break dancing or B-Boying. The crew first started dancing at art exhibitions and galleries of Soho and the Lower East Side of Manhattan.

During this time Doze Green was also attending the High School of Art and Design, where some of the most talented and well-respected graffiti artists came from. In 1982 Green showed his artwork in a well-known group show at the Fun Gallery. At this same time after appearances in major movies such as Flashdance, Style Wars, and Wildstyle, the Rock Steady Crew was launched into action and the limelight.

From B-boy to graffiti legend, Doze Green has gone to tagging the hallways of South Bronx projects to designing for clothing lines like Kikwear and Ecko. In the process, he’s become a proponent of the avant-garde “fusionistic” art movement. Best known for his characters, Doze Green has begun to concentrate on canvases that blend wildstyle techniques with metaphysical concepts. Doze Green is also known for his live painting performances. Doze Green’s work is in many public and private collections throughout the United States, Japan, Europe, and Australia. His works have been published in BlackBook, Anthem, Juxtapoz, Tokion, and Vibe and reviewed on CNN.” (from Jonathan Levine Gallery)