The 2010 Vancouver Winter Olympics are underway and I came across this incredible work of art created especially for the event. In 2008, The City of Richmond, British Columbia, Canada – a venue city for the Games, commissioned Canadian Artist Gordon Halloran to create a large installation at City Hall to open the Olympic celebrations and provide a gateway to The Richmond O Zone – an official celebration site of the 2010 Winter Games.

“Ice Gate” is one of the largest installations Halloran has created to date, measuring over 100 feet long and 14 feet in height. Inspired by a glacial wall in its final stages of movement toward the ocean, the intricately detailed work reveals colourful patterns created by the interaction of pigment with the crystal structure of the ice.

At first glance, the Ice Gate appears to be a sculpture.  “It is however, closer to a three-dimensional watercolour painting. Many of the pieces of ice were created using a process Halloran calls “live mixing”, whereby several different paint solutions are simultaneously poured into a single mould and frozen.” This part of the work was done off-site in an enormous space in Richmond kept at  –27 ° C. Once the paintings set, Halloran carefully breaks them to showcase the pigment or crystal structures which are then transported to the installation site.

Halloran’s first major project was at the West End Community Centre in Toronto in 1991. Using a Zamboni as an etching knife, he transformed the ice rink into a giant abstract painting. About 3,000 people came out to skate on the piece and leave their mark. Since that time, Halloran has created installations in cities including Calgary, Toronto, and Chicago. For the 2006 Winter Games in Turin, Italy, he froze the entire interior of a church and made it his canvas.

Halloran has recently developed a process for converting his temporary ice paintings into permanent works of art. The detailed patterns of the original work are scanned and captured as digital information, reconfigured in a computer, and output to an archival Giclé printing system. This allows the piece to be layered and individually modified to capture the essence of the original ice painting.

For more information about Gordon Halloran, visit IcePaintingProject.com or check out the Ice Gate Blog. 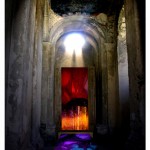 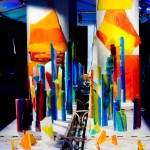 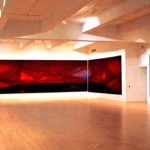