American mixed media artist Jesse Hazelip was born in 1977 and raised in the mountain desert town of Cortez, Colorado, amidst  the Navajo and Ute Nation territory. He moved to Santa Barbara, California at the age of 14 where he became involved in the world of graffiti. Hazelip has a Bachelor of Fine Arts  from Art Center College of Design in California and currently lives in Oakland, CA.

Hazelip recently finished up his exhibition, “Sentimental Journey”, at White Walls Gallery in San Francisco. This series  features the human exploration of death and the lessons ignored throughout North American history.

“World War II greatly influenced this series, where buffalo are named after actual 1950s Bomber airplanes and beautiful Herons are rendered half machine gun, half bird. Jesse uses these animals to open a dialogue about the repeating mistakes of American history. Just as our carelessness have forced bison, an American icon, to the brink of extinction; so has war almost destroyed our country. The Heron is also fused with WWII artillery, although its message differs. This greedy bird is solitary from the flock just as Americans are closed off to their own neighbors. By using recognizable images, Hazelip hopes to reach a larger audience by making his work approachable yet thought provoking.”

Hazelip’s work has been exhibited in galleries throughout California.  He also makes a living as a commercial illustrator working with clients such as Converse, Mishka NYC, and National Forest Design.

To see more of Jesse’s work, visit Jessehazelip.com or his blog JesseHazelip.blogspot.com 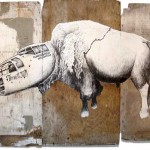 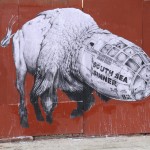 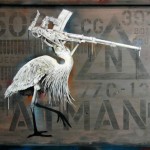