Born in Eugene, Oregon in 1969, Jud Turner has always drawn, painted, and sculpted – “trying to make some sort of tangible record of his experiences and impressions of the world.” He studied drawing and painting, earning a BFA from the University of Oregon. In the early 1990’s, sculptural works became his main artistic output, focusing on direct welded steel work and found object assemblages.

“Quantum physics tells us that apparently solid objects are comprised of vast empty spaces, populated by tiny particles whose individual relationships create the whole. And that a single particle can exist in two separate places during one moment in time.”

“Turner explores such dichotomies in his sculpture. Using welded steel and found objects, he creates artwork which embraces opposites – the tension between humans and nature, the perils of balancing biology and technology,  or the combination of ancient fossils with modern machinery. He also engages contradictions by the materials he chooses – human forms which appear solid and realistic, but which were made with a delicate surface of thin wire, allowing the viewer to see through the figure; or by mixing the sense of scale in a piece, using large items alongside tiny pieces.”

Turner currently lives and works in Eugene, with his wife, Melissa, and their three cats. To see more of his work, visit JudTurner.com. 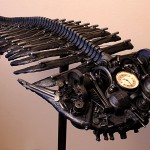 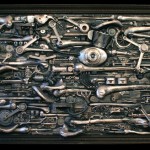 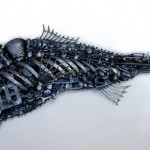