Born on April 16, 1927 in Rochester, Indiana, John Chamberlain is an American sculptor best known for his works made from automobile parts.  Chamberlain grew up in Chicago and attended the Art Institute of Chicago from 1951 to 1952. From 1955-56, he studied at Black Mountain College in North Carolina.

“His early welded-iron sculpture was heavily influenced by Abstract Expressionism and by the sculpture of David Smith. By 1957, he began to include scrap metal from cars in his work, and from 1959 onward he concentrated on sculpture built entirely of crushed automobile parts welded together. Chamberlain’s first major solo show was held at the Martha Jackson Gallery, New York, in 1960.

Chamberlain’s work was widely acclaimed in the early 1960s. His sculpture was included in The Art of Assemblage at the Museum of Modern Art, New York, in 1961, and the same year he participated in the Sao Paulo Bienal. From 1962, Chamberlain showed frequently at the Leo Castelli Gallery, New York, and in 1964 his work was exhibited at the Venice Biennale. While he continued to make sculpture from auto parts, Chamberlain also experimented with other mediums. From 1963 to 1965, he made geometric paintings with sprayed automobile paint. In 1966, the same year he received the first of two fellowships from the John Simon Guggenheim Memorial Foundation, he began a series of sculptures of rolled, folded, and tied urethane foam. These were followed in 1970 by sculptures of melted or crushed metal and heat-crumpled Plexiglas. Chamberlain’s work was presented in a retrospective at the Solomon R. Guggenheim Museum, New York, in 1971.”

In the 1970’s, Chamberlain returned to making large sculptures from automobile parts. A major retrospective was held at the Museum of Contemporary Art, Los Angeles in 1986. In 1993, Chamberlain received both the Skowhegan Medal for Sculpture and the Lifetime Achievement Award in Contemporary Sculpture from the International Sculpture Center, Washington, D.C.

Chamberlain has lived and worked in Sarasota, Florida, since 1980. For more information about John Chamberlain, visit the source links below. 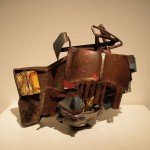 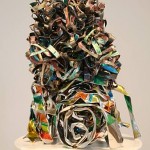 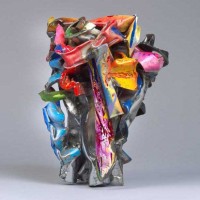 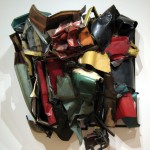 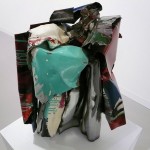 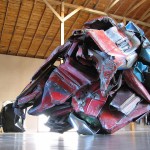 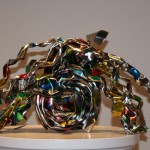 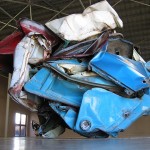 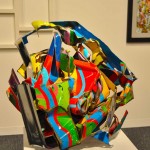 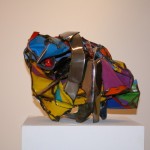