“One man’s garbage is another man’s treasure. But New York City’s garbage, well that’s art.” Justin Gignac’s garbage art began as an experiment in package design. Today, NYC Garbage can be found on desks and bookshelves and mantles around the world.

Since around 2002, Gignac has been hand picking trash and arranging it in small plastic cubes that are signed, numbered, and dated. Typical cubes include items such as soda cans, candy wrappers, receipts, event tickets, cigarette butts, coffee cups, newspapers, and parking tickets. In the beginning, Gignac’s cubes sold for $10 to a few intrigued tourists. These days, he has sold over 1,300 cubes in 29 countries for $50 and up.

Found art is not a new idea. Marcel Duchamp coined the term “readymade” to describe his found art in 1915. Since then, found object art has been prevalent in the Dada, Surrealist, and Pop Art movements to name a few. The meaning of found art has expanded over time and now, numerous categories have been defined including assemblage, appropriation, collage, and even Internet based found images that are reworked with computer graphic tools to form new works of art. ⑴ 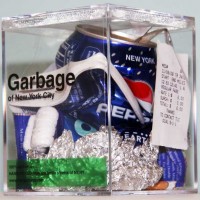 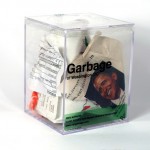 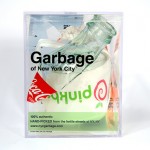 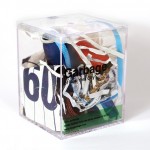