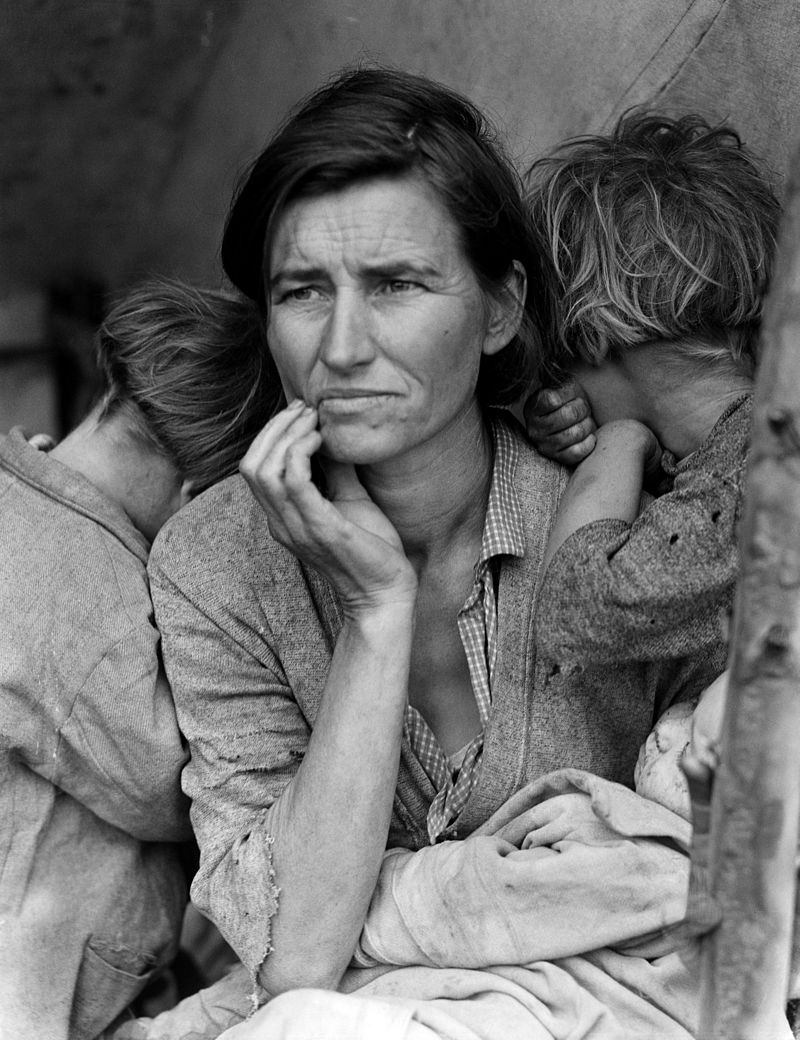 One of the most iconic photographs of the Depression and in American history is Lange’s Migrant Mother, photographed in 1936 in Nipomo, California at a campsite of out-of-work pea pickers.  Lange approached one of the pickers, Florence Owens Thompson (1903 – 1983) and her seven children and asked to take their photo.

“I did not ask her name or her history. She told me her age, that she was 32. She said that (she and her children) had been living on frozen vegetables from the surrounding fields, and birds that the children killed. She had just sold the tires from her car to buy food.”  –Dorothea Lange

During this period, known as the Dust Bowl,  severe dust storms greatly damaged the ecology and agriculture of the US and Canadian prairies. Poverty stricken families like Florence’s, were common. “Their poverty was total; they had nothing. Where is her husband, the children’s father? She is on her own. There is no help, no protection, and nothing over the horizon but work, want and more wandering. Her worried, vacant expression seems to communicate what we, at our end of history, already know: Things were not going to get better for a long, long time.” (PBS)

For over forty years, the identity of the woman in the photo remained unknown. In 1978, Emmett Corrigan, a reporter from the Modesto Bee tracked down Florence in a trailer park outside Modesto, California. She was 75 at the time. “Lange had promised Thompson that her name would never be published — Thompson wanted to spare her children the embarrassment — but once she was discovered, she revealed her name and told her story.”  A letter Thompson wrote was published in The Modesto Bee and the Associated Press distributed a story headlined “Woman Fighting Mad Over Famous Depression Photo” Florence was quoted as saying “I wish she (Lange) hadn’t taken my picture. I can’t get a penny out of it. She didn’t ask my name. She said she wouldn’t sell the pictures. She said she’d send me a copy. She never did.“

Migrant Mother catapulted Dorothea Lange’s reputation and helped earn her a Guggenheim fellowship for achievement in photography. She was funded by the federal government when the photograph was taken, so the image was in the public domain. Lange never directly received any royalties.  In 1941, Lange gave up her Guggenheim Fellowship to document the forced evacuation of Japanese Americans from the West Coast, on assignment for the War Relocation Authority.

In 1945, Lange accepted a position as faculty at the first fine art photography department at the California School of Fine Arts. In 1952,  she co-founded the photographic magazine Aperture with a consortium of photographers including Ansel Adams. Lange and Pirkle Jones were commissioned in the mid-1950s to shoot a photographic documentary for Life magazine of the death of Monticello, California and of the displacement of its residents by the damming of Putah Creek to form Lake Berryessa. Life did not run the piece, however an entire issue of Aperture was devoted to the work. The photo collection was shown at the Art Institute of Chicago in 1960.