Born in 1977, UK artist David Whitlam showed an interest and talent for drawing at a young age. While studying graphic art at Leeds Metropolitan University, he developed a curiosity for surrealism and the workings of the unconscious.

Whitlam works in three mediums – pencil, oil paint, and Adobe Photoshop.  His goal is to “tap into the desires and anxieties within the subconscious.”  Whitlam does this by using a technique called automatic drawing working only from his imagination. With no planning, he allows his images to evolve into their own identities rather than attempting to capture reality.  “By re-arranging these universal symbols, by dressing them in carnival masks and making them pose amidst absurdities , I create my own visions, whose meanings are often highly personal and esoteric, yet which somehow echo the aesthetic style of past cultures, and relate to more general themes within the collective subconscious”.

Whitlam is a member of the Vernon Mill Artists in Stockport – one of the largest studio-based art groups in the UK. His paintings have been exhibited in venues around Stockport and Manchester and have sold to collectors around the world. To see more of David Whitlam’s strangely fascinating work, visit DavidWhitlam.com or see his profile on Deviant Art. 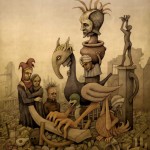 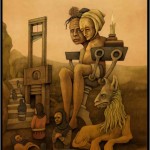 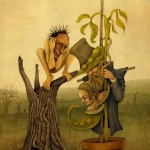 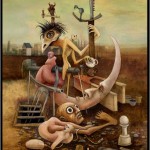 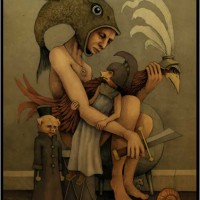 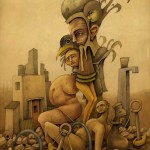 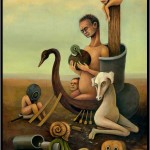