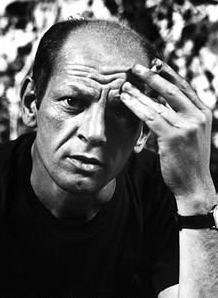 Born on January 28, 1912 in Cody, Wyoming, Paul Jackson Pollock was a key figure in the Abstract Expressionist movement. Pollock grew up in Arizona and California and began his painting studies at the Manual Arts High School in Los Angeles in 1928.  In 1930, he moved to New York where he studied with Thomas Hart Benton at the Art Students League. During this early time in his studies, Pollock was influenced by the murals of José Clemente Orozco and Diego Rivera. From 1935 to 1942, Pollock worked on the WPA Federal Art Project as a mural assistant to David Alfaro Siqueiros, and as an easel painter.

Pollock’s paintings during this time were inspired by Navajo sand painting, Asian calligraphy, and personal revelations stemming from four months of Jungian psychotherapy to treat his alcoholism. “This resulted in an obsessive exploration of his unconscious symbolism, mediated through the stylistic influence of Picasso, Orozco, Joan Miró and the theories of John Graham. The works he created parallel to his psychotherapy contain the elements of what became a personal iconography.”

By 1947, Pollock was creating densely layered compositions that brought both praise and criticism. Some critics viewed them as “meaningless and chaotic”, while others saw them as “superbly organized, visually fascinating and psychologically compelling.”

Pollock’s first solo show was held in 1943 at Peggy Guggenheim’s Art of This Century gallery in New York. Guggenheim gave him a contract that lasted through 1947, allowing him to devote all his time to painting. Prior to 1947 Pollock’s work was influenced by Pablo Picasso and Surrealism, and in the early 1940’s, he participated in several Surrealist and Abstract art exhibitions.

In 1945, Pollock married artist Lee Krasner, who became an important influence on his career and on his legacy. In the fall of that year, the couple moved to what is now known as the Pollock-Krasner House and Study Center in Long Island, New York.

From 1947 to 1952 Pollock created his most famous “action paintings“. “Pollock’s technique of pouring and dripping paint is thought to be one of the origins of the term action painting. With this technique, Pollock was able to achieve a more immediate means of creating art, the paint now literally flowing from his chosen tool onto the canvas. By defying the convention of painting on an upright surface, he added a new dimension, literally by being able to view and apply paint to his canvases from all directions.” These works were also larger in scale and were given numbers instead of titles.

A profile in the 8 August 1949 issue of Life magazine introduced Pollock’s  art to Americans and secured his growing reputation as one of the foremost modern painters of the time. During this intensely creative time, Pollock was treated by a doctor who substituted his drinking with tranquillizers. In 1951, he began drinking heavily again.

In 1952, Pollock’s first solo show in Paris opened at the Studio Paul Facchetti and his first retrospective was organized by Clement Greenberg at Bennington College in Vermont. His work was shown in many group exhibitions, including the Whitney Annuals, the Museum of American Art, New York, from 1946 and the Venice Biennale in 1950. Although his paintings were widely known and exhibited internationally, Pollock never traveled outside the United States.

By 1955, Pollock’s alcoholism and depression had overtaken his life and he stopped painting altogether. He was also becoming increasingly estranged from his wife and in the summer of 1956 she traveled to Europe to re-evaluate their relationship.

On August 11, 1956, Jackson Pollock  died in an automobile accident. Driving drunk, he overturned his convertible, killing himself and an acquaintance, and seriously injuring his other passenger. After Pollock’s death, Krasner, managed his estate and ensured that his reputation remained strong. They are buried together at Green River Cemetery in Springs, Long Island. 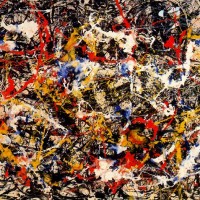 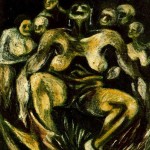 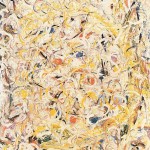 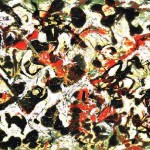 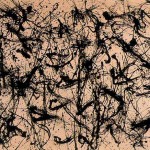 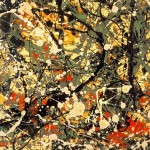 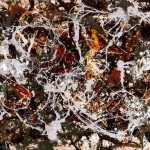 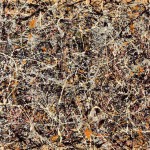 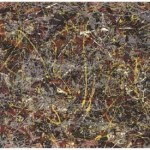 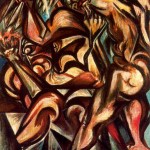 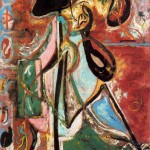 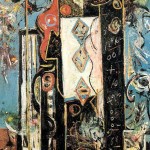 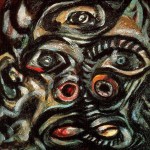 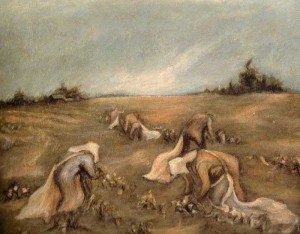 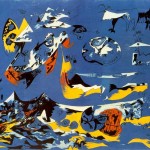 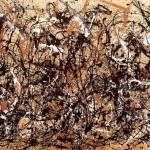 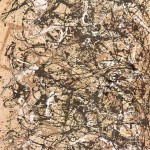 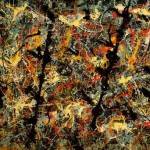 Buy handmade works by Canadian artists and artisans – shop Canadian and save!

Artbabble.org has grown quite a bit since we last reported on them in 2009. Launched by  the Indianapolis Museum of Art, Art Babble  showcases video art content in high quality format from a variety of sources and perspectives.

Check out this video from MoMA on the painting techniques of Jackson Pollock and be sure to visit Artbabble.org for more art education resources.