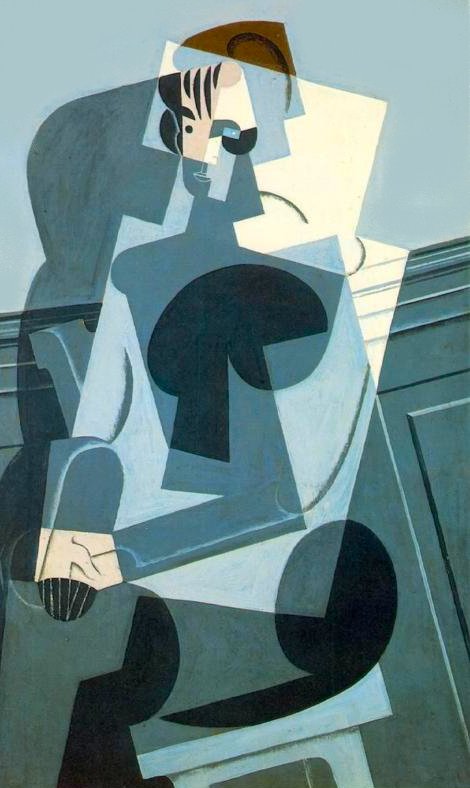 Born on March 23, 1887 in Madrid, Spain,  José Victoriano Carmelo Carlos González-Pérez (better known as Juan Gris), was a painter, draughtsman, illustrator and writer. Gris was considered one of the leading Cubist painters of his time.

Gris studied mechanical drawing at the Escuela de Artes y Manufacturas in Madrid from 1902 to 1904. During this time, he also contributed drawings to local periodicals. From 1904 to 1905 he studied painting with the academic artist José Maria Carbonero. From 1905 to 1906, Gris worked as an illustrator, producing drawings in the Art Nouveau style for the periodical “Renacimiento Latino” and for a book of poems, “Alma América”  by  José Santo Chocano.

In 1906 Gris moved to Paris, where he would remain for most of his life. In Paris, he associated with Georges Braque, Fernand Léger, and Pablo Picasso and the writers Guillaume Apollinaire, Max Jacob, and Maurice Raynal. Gris began to paint seriously in 1910 and by 1912 he had developed a personal Cubist style.

Gris exhibited for the first time in 1912 at the Salon des Indépendants in Paris, Galeries Dalmau in Barcelona, Der Sturm gallery in Berlin, the Salon de la Société Normande de Peinture Moderne in Rouen, and the Salon de la Section d’Or in Paris. He was also signed by French art dealer D.H. Kahnweiler who had exclusive rights to the artist’s work.

“His approach to Cubism, which has often been called scientific in its logic and precision, may well have been affected by his knowledge of technical drawings. From 1913 to 1914, Gris explored the potential of words in Cubist painting as introduced by Picasso and Braque through collage and papier collé. He was quick to exploit papier collé to achieve greater surface activity, clearer compositional structures and a more complex play between modes of descriptive and allusively verbal representation.”

During World War I,  Gris focused on subjects including musical instruments, music sheets, books and domestic paraphernalia. Between 1916 and 1918 he took on a leading role within Cubism and  was a respected friend of other artists who became influential after the war.

From 1916 – 1920, Gris’ Cubist ‘classicism’  was associated with the development of  a ‘pure’ Cubist practice. In 1921, he wrote in L’Esprit nouveau, a Purist magazine.  “He claimed to start with the manipulation of flat shapes, only afterwards ‘qualifying’ them so that they became identifiable in terms of subject-matter. He worked, he said, ‘deductively’ from the general to the particular, the abstract to the concrete, ensuring a basis for his art in conception rather than perception. He called this process ‘synthetic’ to distinguish it from the ‘analysis’ of things that he considered fundamental to his earlier Cubism.”

Gris’ first major solo show was held at Rosenberg’s Galerie l’Effort Moderne in Paris in 1919.  His production was diminished however in May 1920 by  illness – possibly undiagnosed pulmonary tuberculosis. He was hospitalized until August 1920 and was in recovery until 1921, though he did paint again in autumn 1920.

From 1921 to 1922, as Gris regained his health,  he produced some of his most successful classical synthetic works including a series of open-window paintings in which still-lifes are placed before open windows appearing to merge into Mediterranean and mountain views.

Between autumn 1922 and 1924, Gris paintings became richer, with a more vibrant range of colours . His subjects seemed both more “naturalistic and more anecdotal” including images of clowns, sometimes in a drunken state.  “Gris remained committed to his advanced Cubist position, and in April 1924 he delivered a lecture at the Sorbonne, ‘Sur les possibilités de la peinture’. It was the most elaborate exposition of his ideas on synthesis and on art as creation.”

From 1924 until his death,  Gris gained increasing commercial and critical success as well as returning to what he regarded as a more “uncompromising synthetic Cubism”.

From October 1925 Gris’s health declined. He died in Boulogne-sur-Seine on May 11, 1927 at the age of forty, leaving his wife, Josette, and son, Georges. 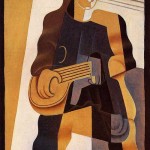 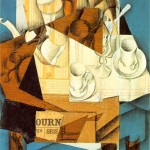 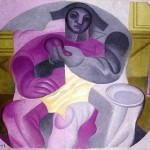 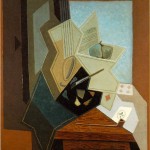 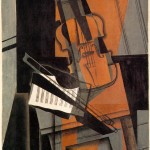 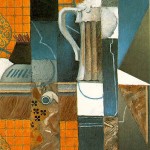 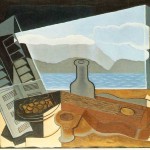 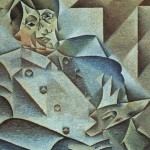 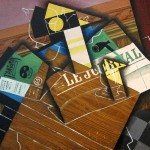 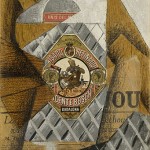 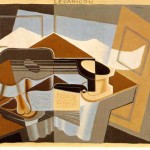 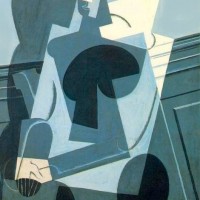 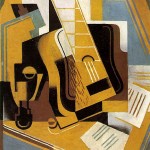 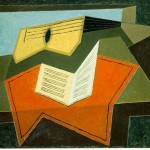 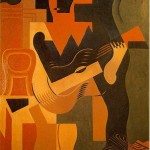