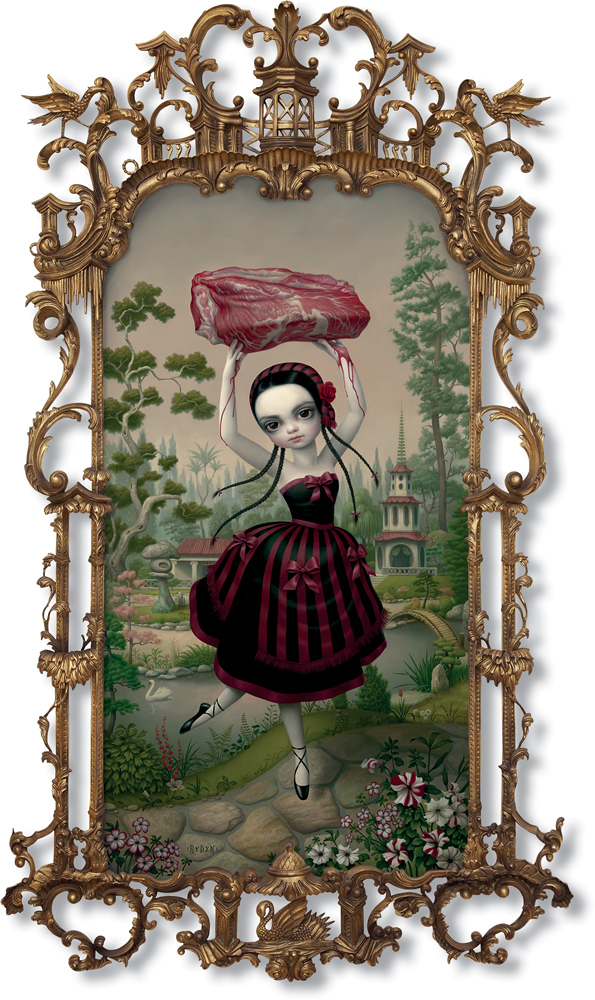 Blending themes of pop culture with techniques reminiscent of the old masters, Mark Ryden has created a singular style that blurs the traditional boundaries between high and low art. His work first garnered attention in the 1990s when he ushered in a new genre of painting, “Pop Surrealism”, dragging a host of followers in his wake. Ryden has trumped the initial surrealist strategies by choosing subject matter loaded with cultural connotation.

Ryden’s vocabulary ranges from cryptic to cute, treading a fine line between nostalgic cliché and disturbing archetype. Seduced by his infinitely detailed and meticulously glazed surfaces, the viewer is confronted with the juxtaposition of the childhood innocence and the mysterious recesses of the soul. A subtle disquiet inhabits his paintings; the work is achingly beautiful as it hints at darker psychic stuff beneath the surface of cultural kitsch. In Ryden’s world cherubic girls rub elbows with strange and mysterious figures. Ornately carved frames lend the paintings a baroque exuberance that adds gravity to their enigmatic themes.

Mark Ryden received a BFA in 1987 from Art Center College of Design in Pasadena. His paintings have been exhibited in museums and galleries worldwide, including a retrospective “Wondertoonel” at the Frye Museum of Art in Seattle and Pasadena Museum of California Art, and in the exhibition “The Artist’s Museum” at the Museum of Contemporary Art in Los Angeles. He currently lives and works in Los Angeles. (bio from artist’s website)

Ryden will have an exhibition of new paintings entitled “The Gay 90’s: West” at the Michael Kohn Gallery. Dates to be announced soon.

Learn more at MarkRyden.com and why not hop on over to his Facebook page and wish him a happy birthday! 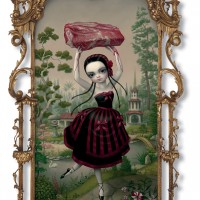 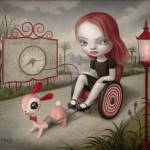 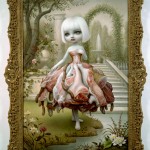 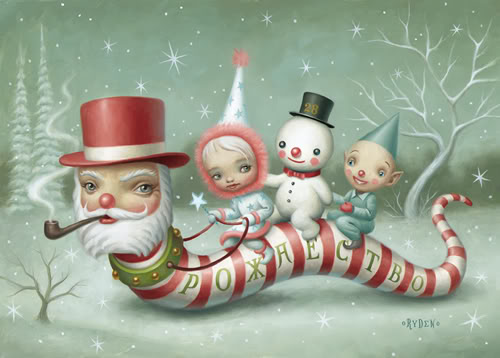 Wishing you all the very best
and a Happy New Year!! 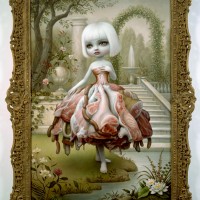 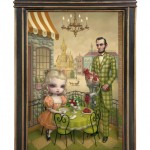 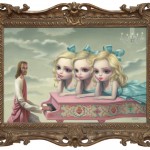 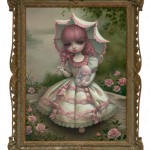 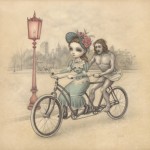 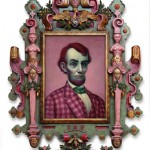 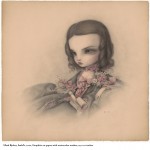 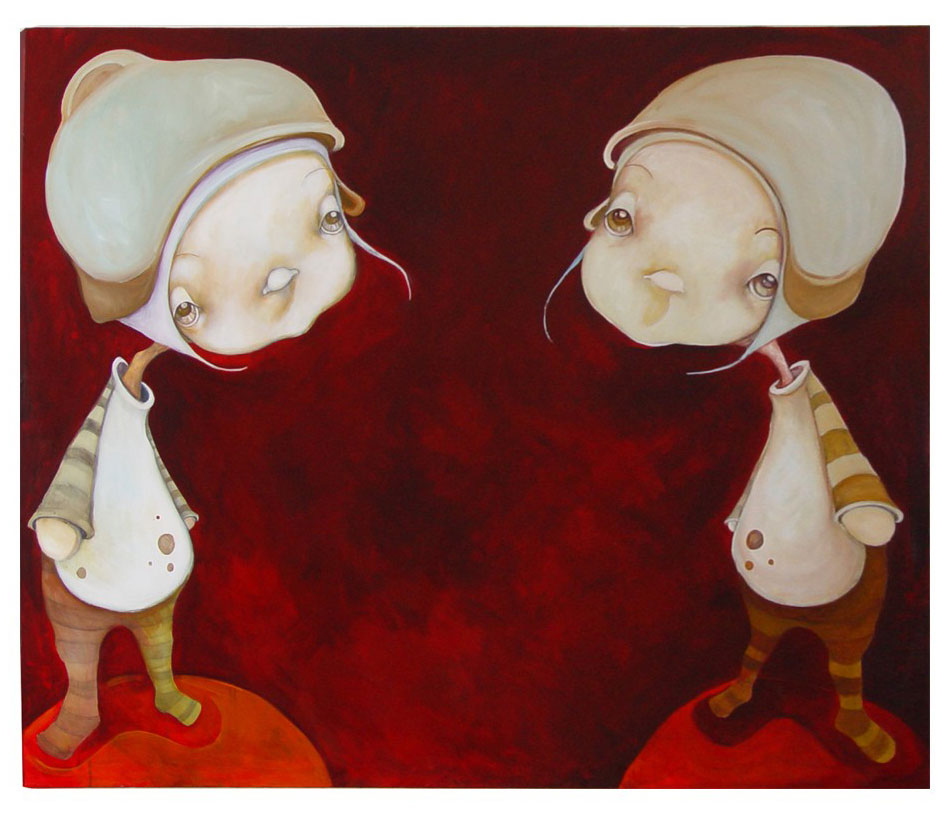 “Jenna Colby is a self taught artist who has always been creative through different mediums, but decided to focus on painting three years ago. Originally from Ohio, Jenna has traveled and lived in both Pittsburgh and Philadelphia, but has called Seattle home since 1999. Growing up in a small town Colby was always fascinated with cities and has been influenced by her travels and the people she has met and observed. “I make it a point to take note and assign a story to the passer by, giving each moment in time purpose and creating color.” After developing and beginning to show her work, Jenna came into contact with the work of artists like Mark Ryden and Yoshimoto Nara. Thinking back, she says, “Their work really moved me. It made me nervous, giddy . . . I’m not sure if there is a word for it. But after experiencing that feeling, I decided that is what I want to do to others. I want to make other people feel that way.”  (bio from artist Etsy site).

To learn more about Jenna Colby, visit SoopajDelux.com, or her Etsy store. 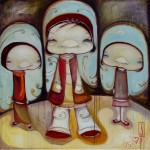 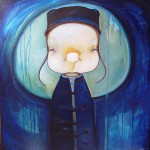 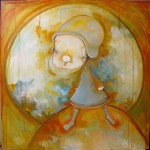 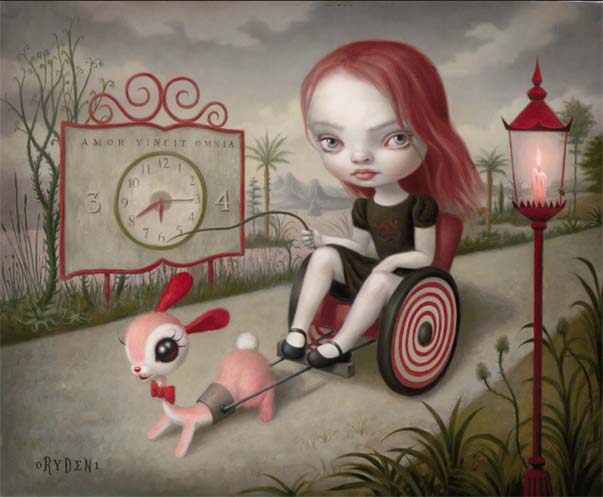 Born January 20, 1963 in Medford, Oregon, Mark Ryden grew up in southern California.  Ryden studied illustration at the Art Center College of Design in Pasadena and graduated with a Bachelor of Fine Arts. He is considered to be one of a few artists who helped to lead a return to traditional painting techniques and a key figure in the movement called Lowbrow Art.

Early influences for Ryden include Dali, Magritte, Bosch, Rosenquist and pop artists.  Later on, he developed a passion for more classic art including David, Ingres, Carpaccio, Balthus, and Bougerau.

Some parallel Ryden’s work to the art in vintage children’s books mixed with the whimsy of Lewis Carroll.  Ryden himself says that he often finds archetypes in old books which later end up in his work, and that he is “attracted to things that evoke memories from childhood.”

One need only look at a Ryden painting to see that his technically astounding and disturbing  images are many things at once – everyday objects and people, placed in unusual and surreal circumstances. Children, blood, raw meat, crosses, cuddly animals, toys, and other cultural symbols all come together to form a world where his characters “speak from a place of childlike honesty about the state of mankind and our relationships with ourselves, each other and our past.”

Ryden has designed album covers for the likes of Michael Jackson (Dangerous), and the Red Hot Chili Peppers (One Hot Minute), to name a few.  He has also published numerous books as well as having his art featured in video games and feature films.

Ryden’s work has been exhibited worldwide and his paintings are in public and private collections.  He currently lives and works in Los Angeles with his partner, artist Marion Peck. To see more of Mark Ryden’s beautifully disturbing work, visit his website at MarkRyden.com. 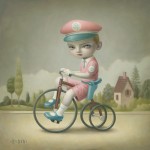 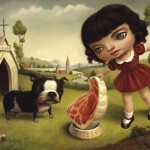 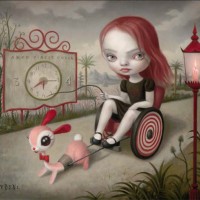