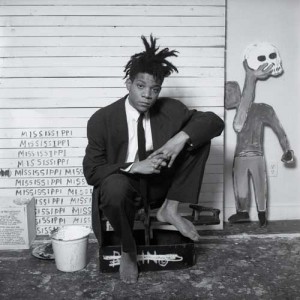 Born on December 22, 1960, in Brooklyn, New York, Jean-Michel Basquiat was a successful graffiti and Neo-Expressionist artist who continues to influence contemporary artists today.

Basquiat showed a passion for art at a young age and was encouraged by his mother who had an interest in fashion design and sketching. Early influences included cartoon drawings, Alfred Hitchcock films, cars and comic books. An avid reader who spoke three languages, Basquiat was also inspired by French, Spanish, and English literature.

From 1976 to 1978, Basquiat created ‘Samo’ (Same Old Shit), a fictional character who earned a living selling ‘fake’ religion. He also collaborated with his close friend and graffiti artist Al Diaz. Basquiat and Diaz’s graffiti took the form of spray-painted messages that were seen around Lower Manhattan. In 1978, SAMO gained some recognition when a positive article was printed in the Village Voice. The collaboration ended in 1979 and “Samo is dead” was seen on walls in SoHo.

In the late 1970s, Basquiat met artists and musicians in various clubs. This led to his introduction to New York art collectors and dealers. During this period, Basquiat created postcards, collages, drawings, and t-shirts that depicted events such as the Kennedy assassination and themes such as baseball and Pez candy.

Basquiat’s first public exhibition was in the group The Times Square Show alsongside David Hammons, Jenny Holzer, Lee Quinones, Kiki Smith, and others. By 1982, he was showing regularly and became part of the Neo-Expressionist movement. That same year, he began dating the then unknown Madonna and met Andy Warhol, with whom he collaborated and formed a close friendship. Basquiat’s first solo exhibition was also in 1982 at the Annina Nosei Gallery in New York.

Basquiat’s art was influenced by imagery and symbolism from African, Aztec, Greek, and Roman cultures, as well as that of his own Puerto Rican and Haitian heritage, and Black and Hispanic cultures. The crown was Basquiat’s signature motif. In some paintings, the crowns are placed on top of generic figures. More often, he crowned his personal heroes including  jazz musicians, such as Charlie Parker and Dizzy Gillespie, and athletes, such as Joe Louis, Sugar Ray Robinson, Muhammad Ali, and Hank Aaron.

Basquiat began many paintings by pasting his own drawings or photocopies of them onto the canvas. He also used words to elaborate his themes often repeating the same words over and over again creating a hypnotic effect.

In 1984, Basquiat began using a new layering technique using silkscreens. His drawings were transferred onto screens and printed onto the canvas. He then painted, drew, and added more silk-screened images to build the piece into a multi-layered composition.

In the mid-1980s Basquiat began using heroin, and much of his artwork appeared unfinished and repetitive. The death of Andy Warhol in 1987 had a profound affect on him. His grief turned into creativity and his painting displayed a new confidence and maturity. Many of his works during this period make references to death.

Following an attempt at rehabilitation, Basquiat died on August 12, 1988 of an accidental drug overdose. He was 27 years old. Several major retrospective exhibitions of Basquiat’s works have been held since his death, in the United States and internationally. The Fondation Beyeler in Basel, Switzerland held a retrospective from May to September, 2010 to mark what would have been Basquiat’s fiftieth birthday.

For more information about Jean-Michel Basquiat, visit the source links listed below. 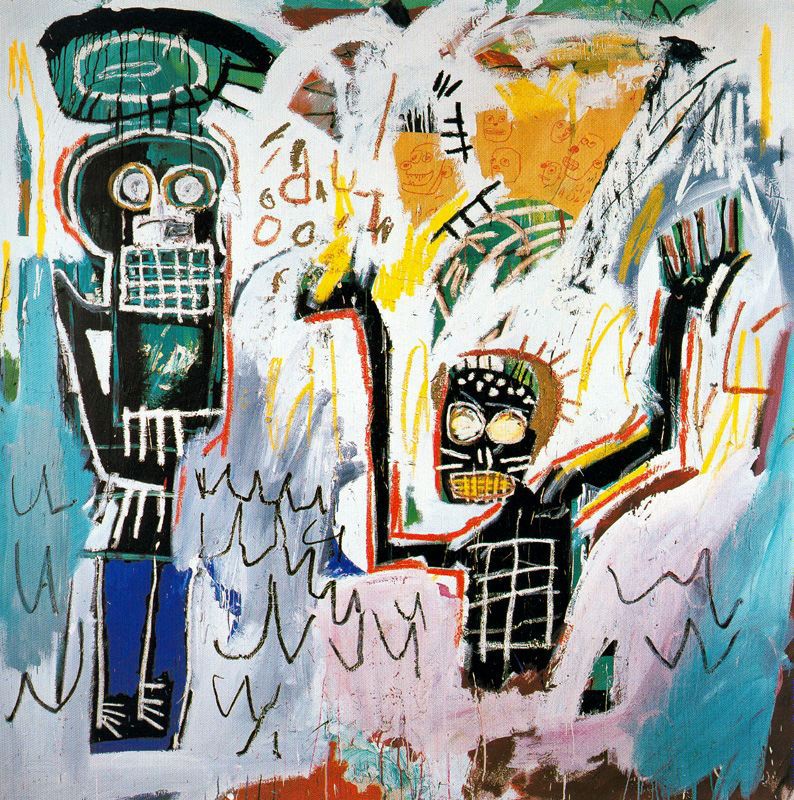 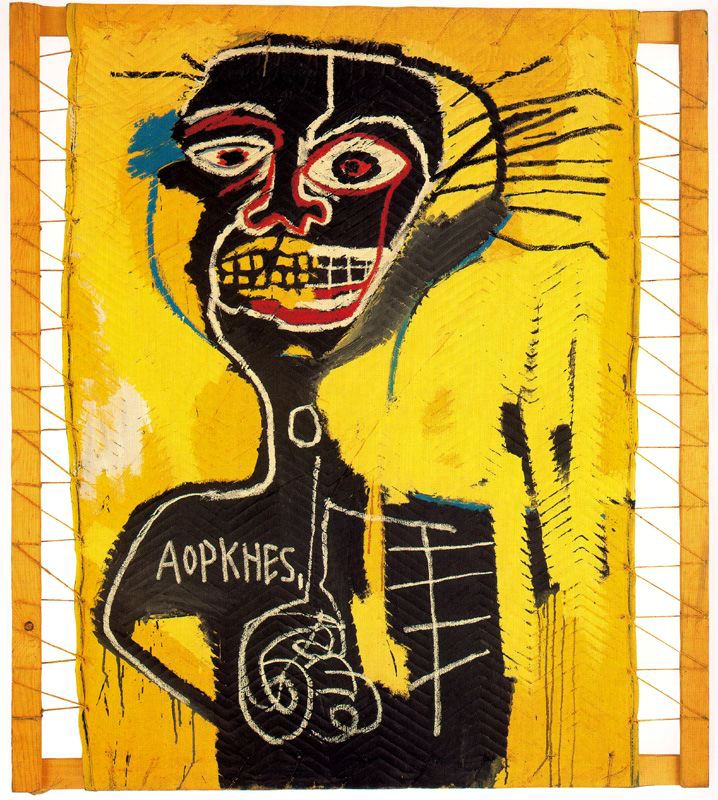 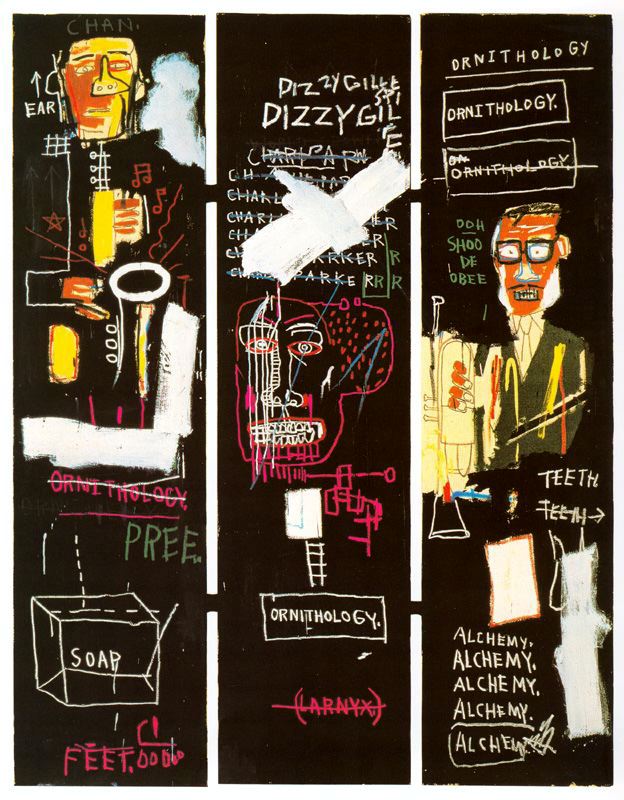 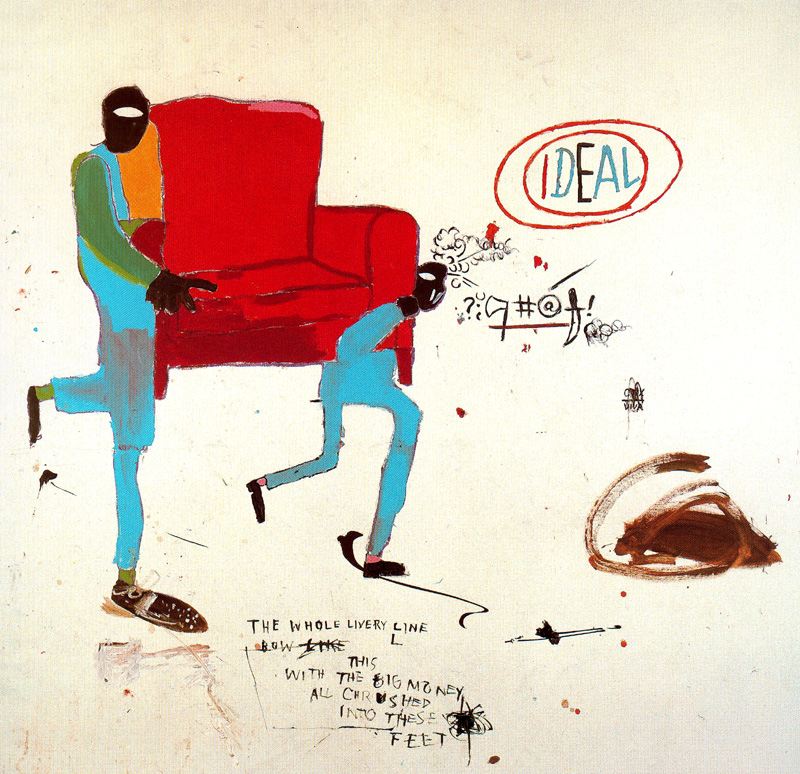 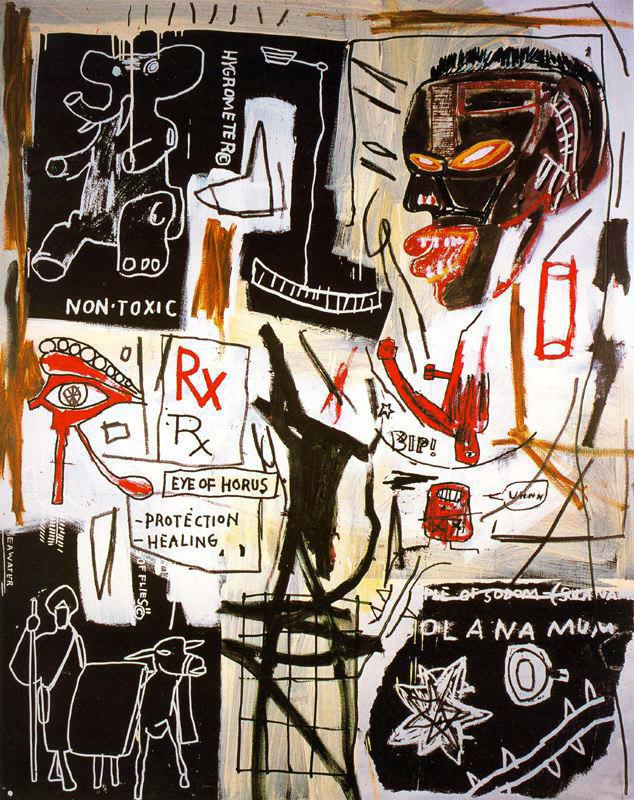 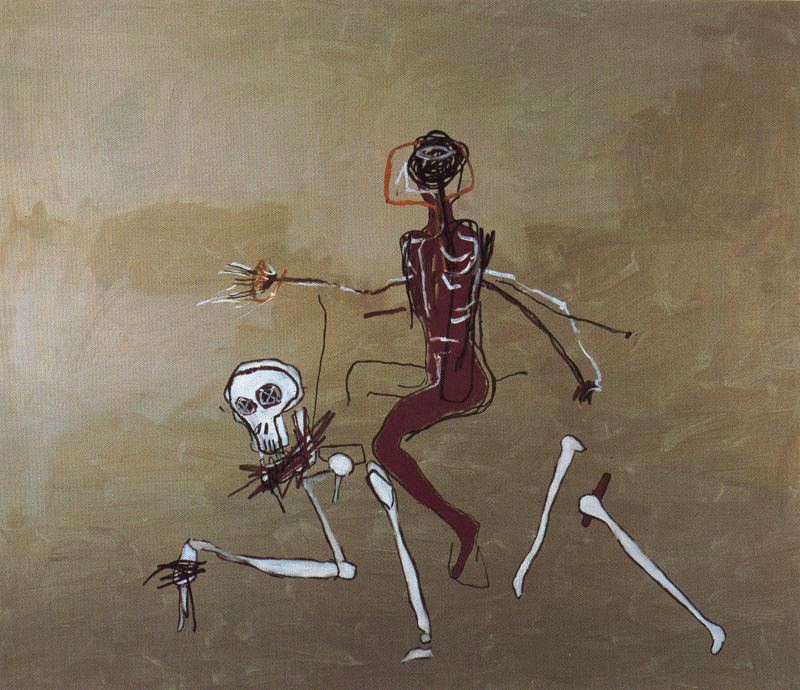 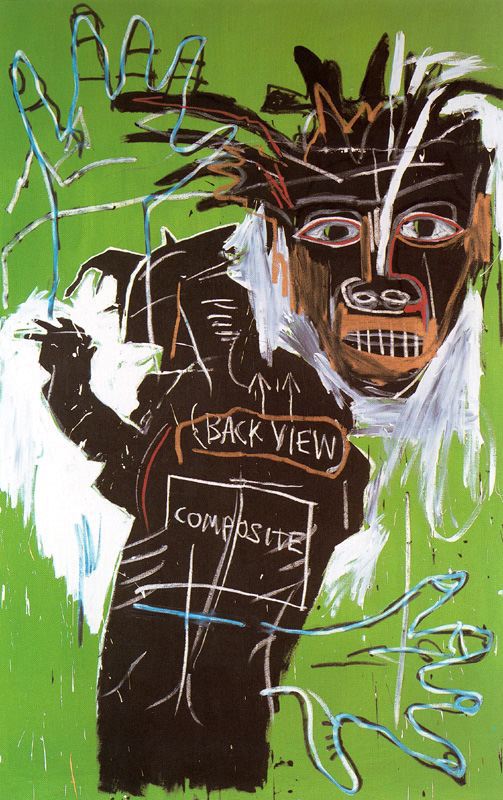 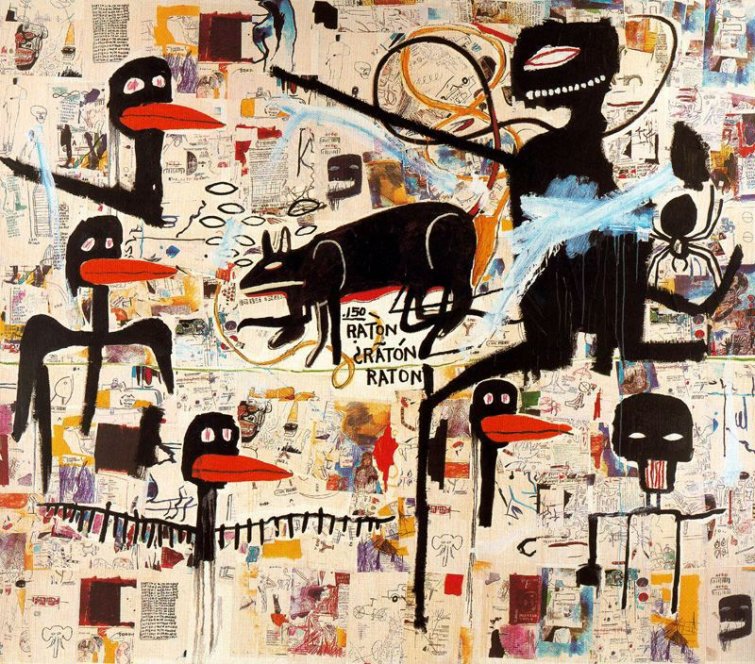 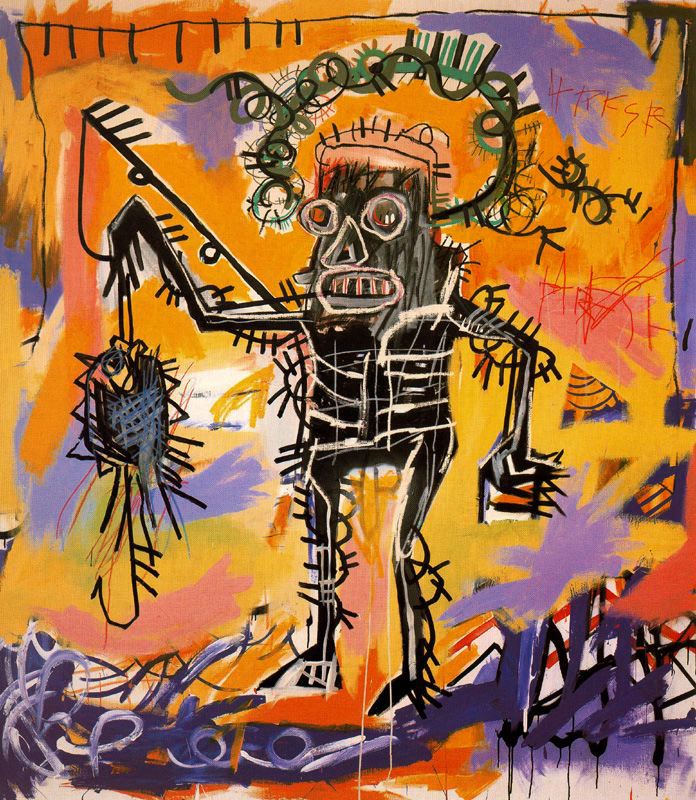 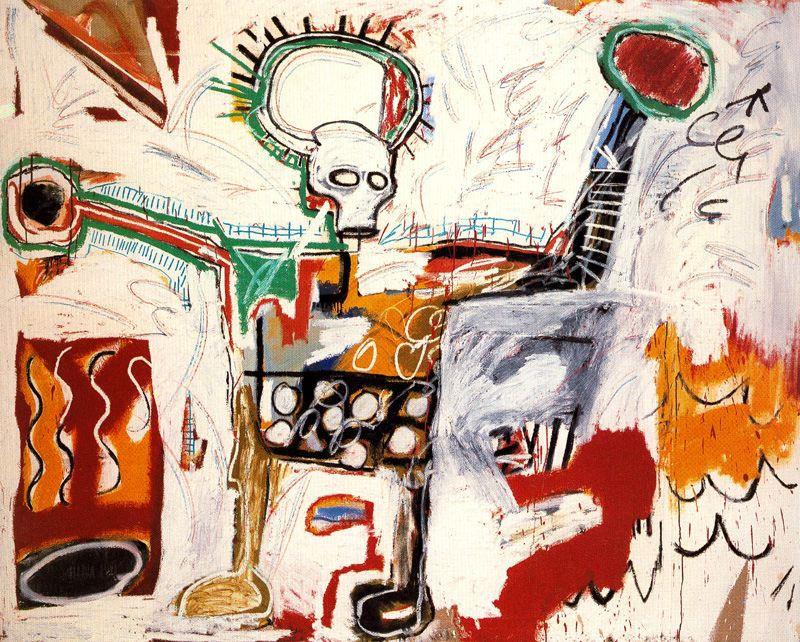