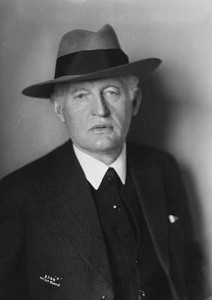 Born on December 12, 1863, in the village of Ådalsbruk in Løten, Norway, Edvard Munch was a symbolist painter, printmaker and draughtsman, and his work is recognized as an important precursor of the Expressionist movement.

In 1879, Munch studied engineering at Kristiania Technical College where he learned scaled and perspective drawing. He was absent much of the time however due to frequent illness. In 1881, Munch decided to become a painter and studied for one year at the Royal School of Design. Upon leaving school, Munch rented a studio with a group of colleagues in Karl Johan Street, in the centre of the city.

In these early years, Munch experimented with different styles including Naturalism and Impressionism. In 1889, he had his first solo show and the recognition he received led to a two-year state scholarship to study in Paris under French painter Léon Bonnat.

Munch was impressed by the modern European art in Paris. He was particularly influenced by Paul Gauguin, Vincent van Gogh, and Henri de Toulouse-Lautrec, and their methods of using colour to convey emotion.

By 1892, Munch had developed his own unique form of Synthetism where colour was the symbol-laden element. In that same year, the Union of Berlin Artists invited him to exhibit at its autumn exhibition. His paintings however, created a bitter controversy (dubbed “The Munch Affair”) and the exhibition closed after only one week. The “Affair” also gave Munch a great deal of publicity and he was invited to exhibit in other parts of Germany.

Apart from spending summers in Norway, Munch lived in Germany for three years. While there, he sketched out most of the ideas for his major work The Frieze of Life, a series of paintings in which Munch explored the themes of life, love, fear, death, and melancholy. His best known painting, The Scream (1893) was also painted during this time.

Munch learned to make drypoints in 1894 and he printed his first colour lithographs and woodcuts in 1896. His method of woodcutting was innovative, using the structure of the wood itself, emphasizing the expressiveness of the material. His woodcuts had a significant influence on later artists, particularly the German Expressionists.

In 1896, Munch moved to Paris, where he continued to develop his woodcut techniques. Many Parisian critics still considered his work “violent and brutal” but his exhibitions were well attended and he received considerable attention.

After constant travel in France and Germany, and a dramatic romance with a Norwegian woman, Tulla Larsen, Munch entered the sanitorium of Kornhaug in Gudbrandsdalen in 1899, and stayed until 1900, to restore his nerves and physical strength.

In 1902, Munch achieved a definitive breakthrough in Berlin. The Frieze of Life was exhibited at the Berlin Secession which led to artistic recognition and financial success. His Paris Salon exhibitions in 1903 and 1904 attracted considerable attention, but his greatest success at this time was his exhibition in Prague in 1905. Also during this time, Munch received many commissions for portraits and prints which improved his financial condition.

In 1908, Munch’s physical and psychological health broke down – his excessive alcohol consumption and brawling had become severe. He entered the sanitorium of Dr. Daniel Jacobsen in Copenhagen where he received treatment for the next eight months. During this time, he continued a series of full-length portraits, arranged sales of works to Norwegian collectors, and prepared for a retrospective exhibition in Kristiania.

Munch’s loyalties were divided at the onset of WWI, as he stated, “All my friends are German but it is France that I love”. In the 1930s, his German patrons, many Jewish, lost their fortunes and some their lives during the rise of the Nazis. Munch’s art was removed from German museums and classified as “degenerate”.

By the time Germany invaded and occupied Norway in 1940, Munch was living an isolated existence on his estate in Ekely, Oslo.  Norwegian museums had also removed his paintings and prints from view. With nearly an entire collection of his art in the second floor of his house, Munch feared Nazi confiscation. Seventy-one of the paintings previously taken by the Nazis had returned to Norway through purchases by collectors.

Munch became ill after an explosion at a munitions depot near Ekely broke the windows in his house. He died on January 23, 1944.

In his will he bequeathed over 1,000 paintings, 15,400 prints, and a large number of their plates, 5,000 watercolours and drawings, and six sculptures to the Municipality of Oslo. The collection went on view to the public after the opening of the Munch-Museet in Oslo in 1963. 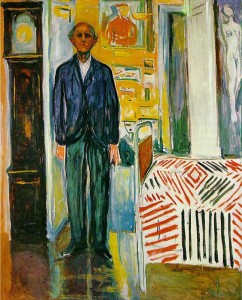 Edvard Munch - Self Portrait between Clock and Bed 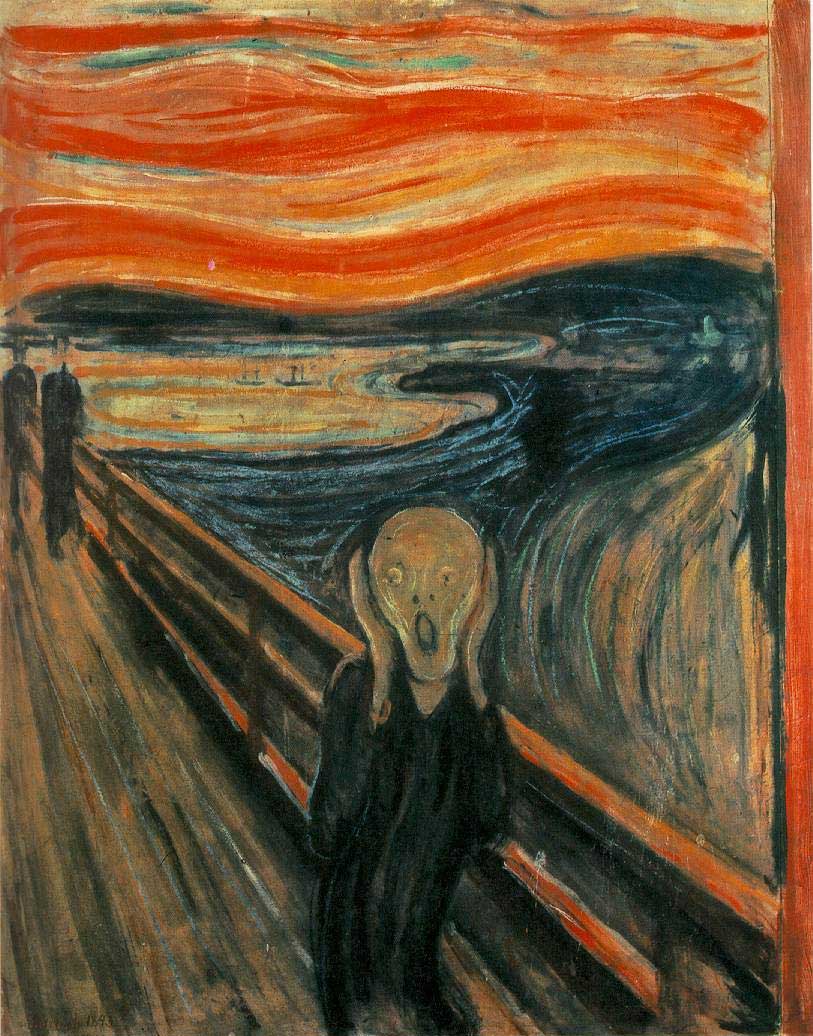 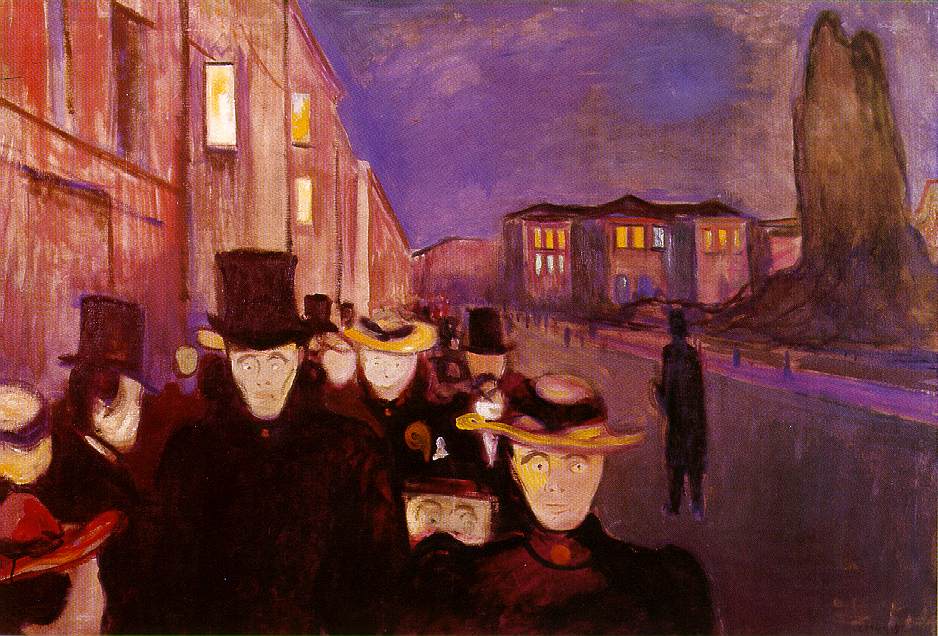 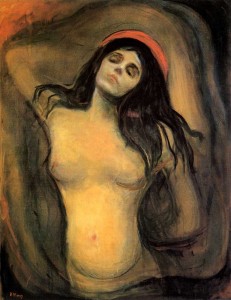 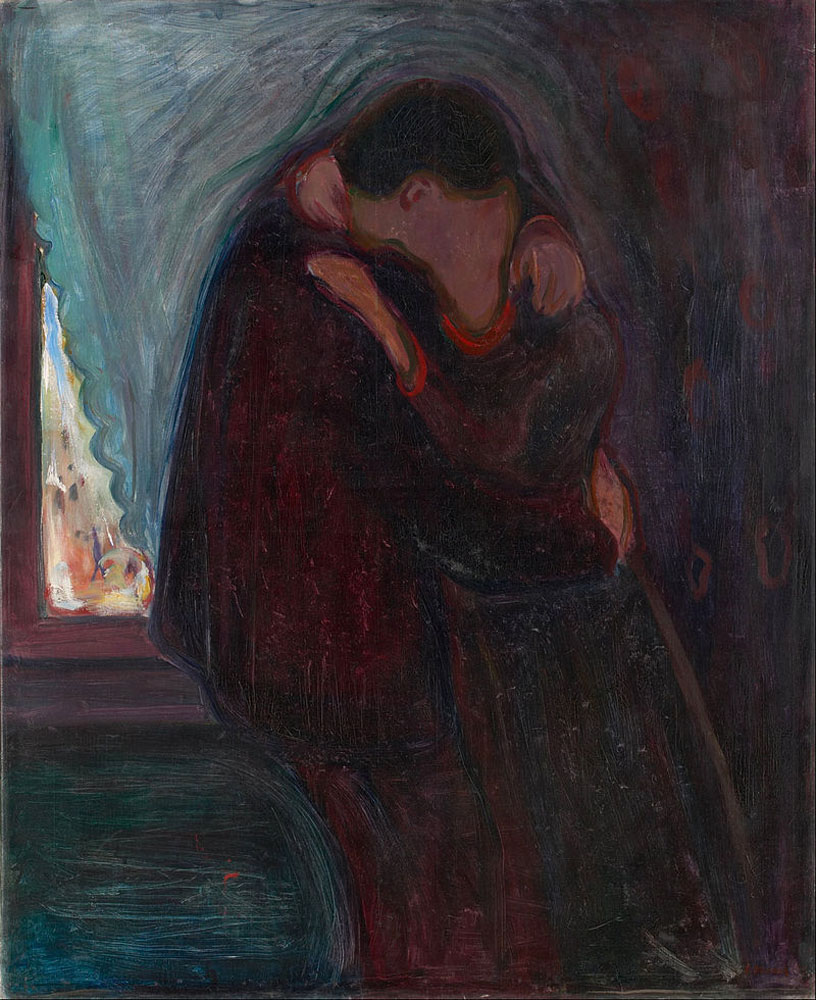 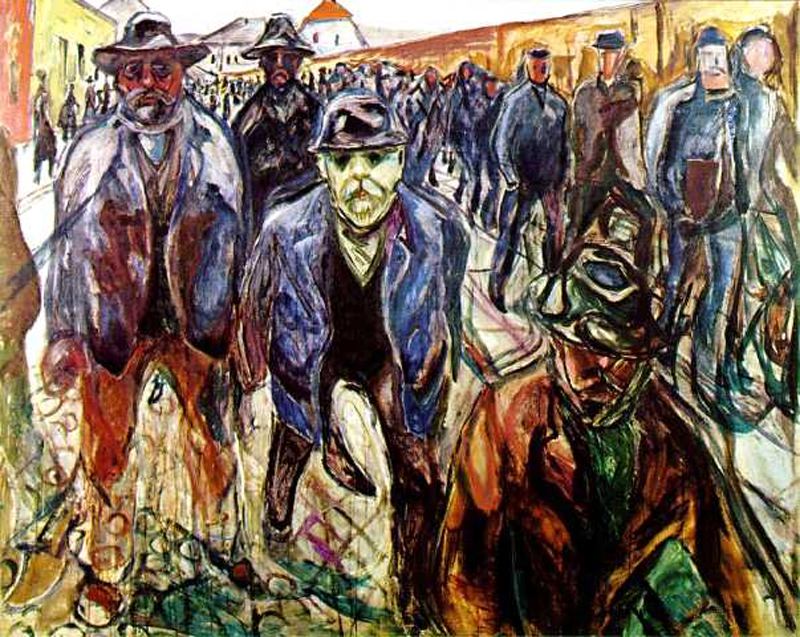 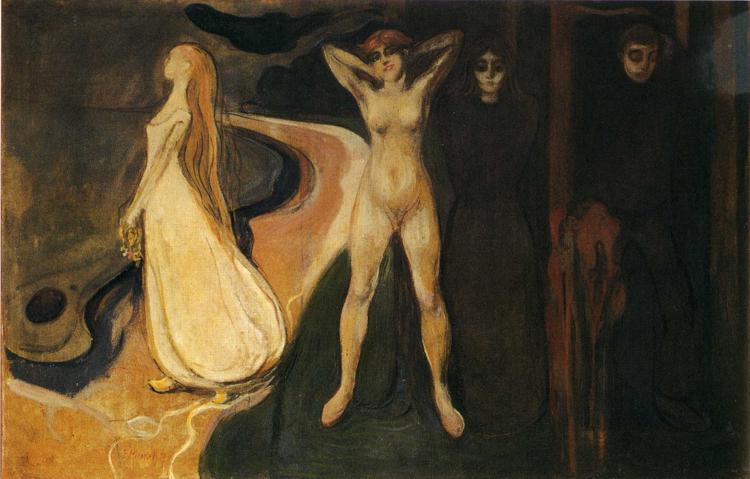 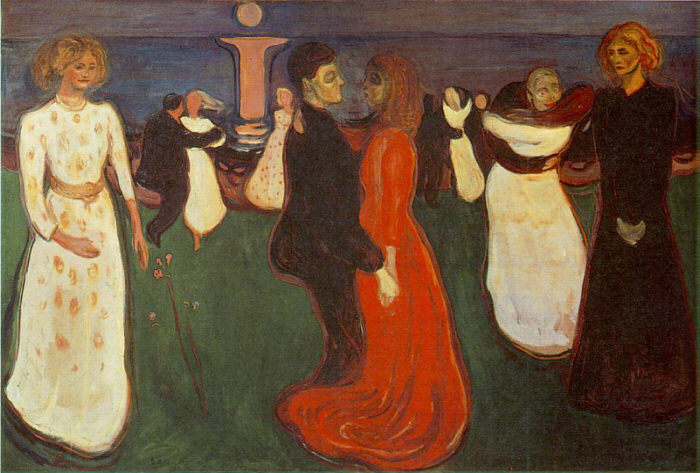 Edvard Munch - The Dance of Life 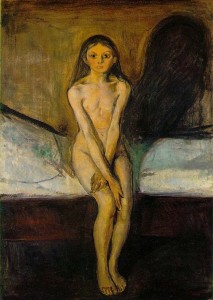 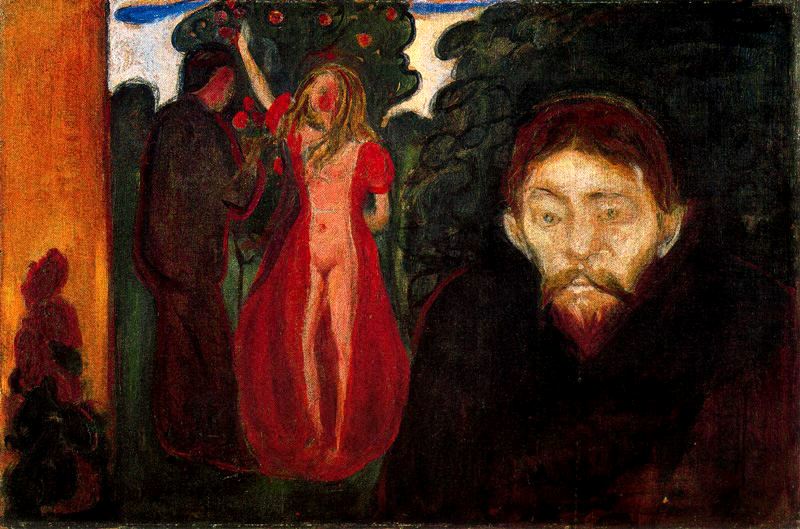 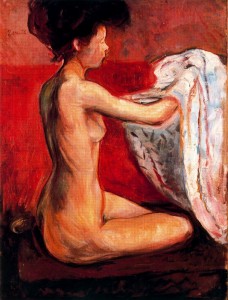 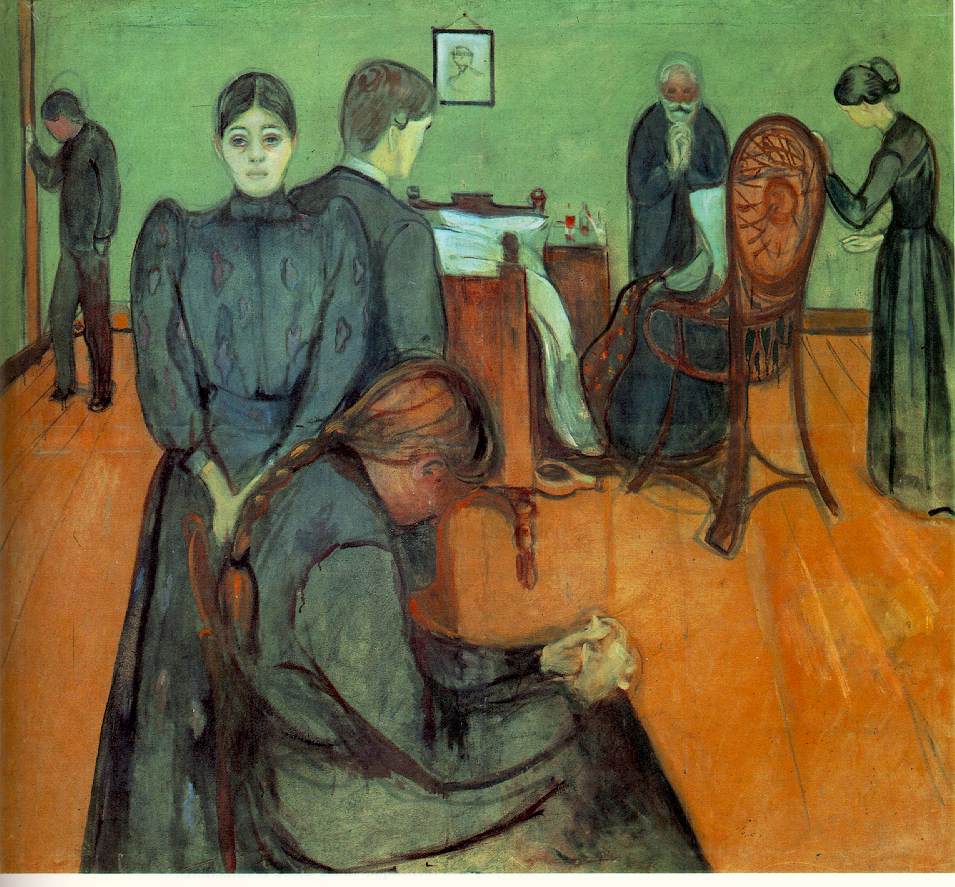 Edvard Munch - Death in the Sickroom 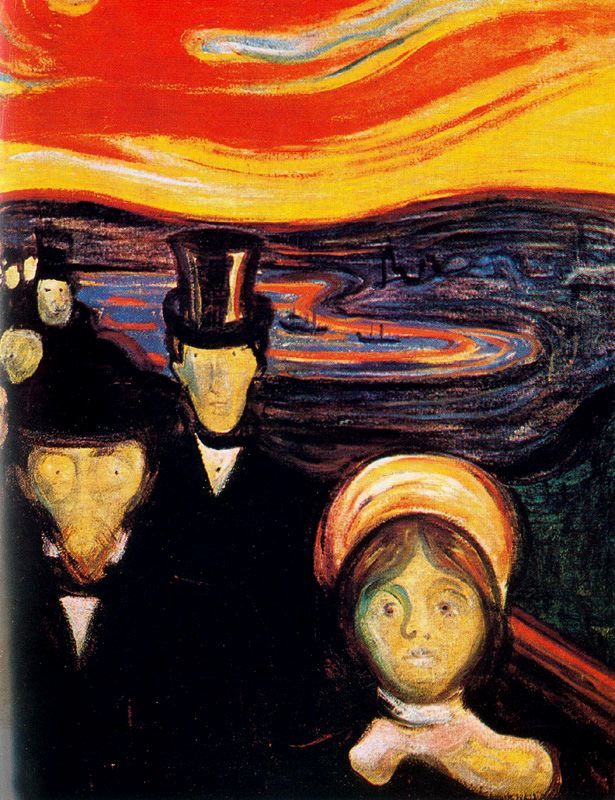 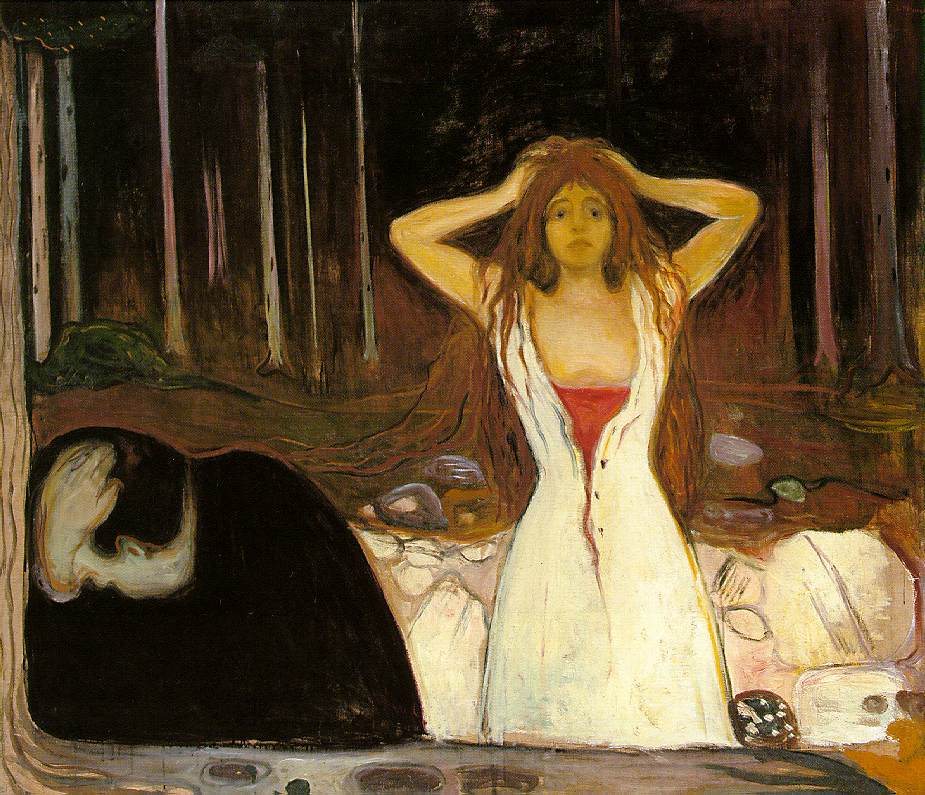