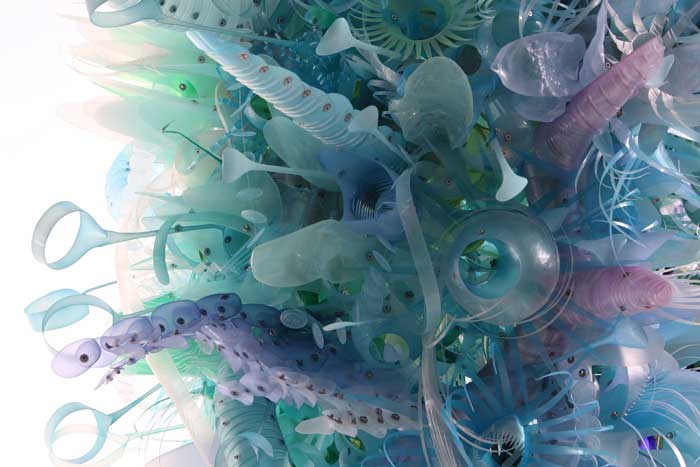 Aurora Robson was born in Toronto, Canada in 1972 but grew up in Hawaii and has lived in New York for 20 years. She has a BA in Visual Art & Art History from Columbia University and is a certified structural welder. Robson currently lives and works in Brooklyn with her husband, cinematographer Marshall Coles and daughter Ona.

Robson uses everyday waste such as discarded plastic bottles and junk mail to create intricate sculptures, installations, and collages. Over the years, Robson has intercepted tens of thousands of bottles, saving them from their ultimate destination at the landfill or costly recycling plants. The fate of her junk mail follows a similar path and have now become part of her stunning ink collages.

“Deeply concerned about the natural environment, Robson sees herself as an eco-activist who uses her art to address urgent issues poetically, not polemically. She is best known for assembling cast-off plastic bottles, which she colorfully paints, into wildly inventive hanging sculptures the smaller ones sometimes containing LED lights and large works that fill entire rooms.” (Art in America Magazine Oct. 2009)

In addition to her work as an artist, Robson is Director/Co-founder of Lumenhouse, a photo studio, artist in residence program, exhibition space and community/cultural event space located in Brooklyn. She is also the founding Director of Project Vortex, an international organization of artists, architects and designers working with plastic debris – working with Project Kaisei to reduce the amount of plastic debris littering our oceans and shorelines.

Robson’s work has been exhibited in numerous solo and group shows across the United States, and has been featured in magazines such as Art in America, Juxtapoz, Artworld Digest, and the cover of Arts Houston to name a few. Most recently, she was awarded the 2010. The Arthur Levine Foundation Grant.