“Scott Radke was born in Cleveland, Ohio, and grew up in the nearby suburb of Strongsville. Radke has experimented with various media throughout his life and currently focuses on the creation of sculptural hybrid creatures with an extraordinarily, innocent, yet dark twist. In 1999 the popularity of his marionettes allowed him to leave his mind-numbing job at a bed-frame factory to pursue his creative passion on a full-time basis. His marionettes have been featured in films including Voices In My Head, a BBC documentary, Desolation Sound, God in the Machine,  and Birthday Massacre’s music video, Blue.”

Radke’s work has been published internationally in magazines including Bizarre (England), Hi Fructose,  NY Arts , among others. His work has been exhibited in galleries across the United States, in Canada, the U.K. and Germany. Radke also creates set designs, costumes, and masks for choreographer Sarah Morrison whom he married after their first creative collaboration.

Radke currently lives and works in Clevland with his wife, their daughter, 4 cats, and numerous goldfish. To see more of his work, visit ScottRadke.com or his photostream on Flickr. 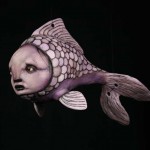 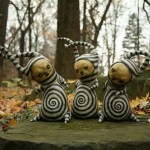