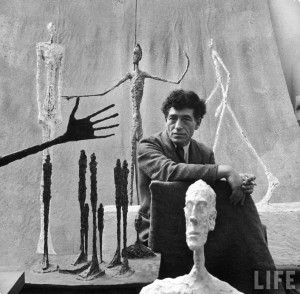 Born on October 10, 1901 in Borgonovo, Switzerland, Alberto Giacometti was a sculptor, painter, draughtsman and printmaker.   His father, Giovanni Giacometti, was a Post-Impressionist painter. From 1919 to 1920, Giacometti studied painting at the Ecole des Beaux-Arts, and sculpture and drawing at the Ecole des Arts et Métiers in Geneva. Between 1922 and 1927, he studied sculpture off and on in Paris under Emile-Antoine Bourdelle at the Académie de la Grande Chaumière. In 1927, Giacometti and his brother Diego, his lifelong companion and assistant, moved into a studio in Montparnasse, returning annually to Switzerland to visit family.

Giacometti made few noteworthy sculptures before 1925 when he turned to Cubism and was influenced by the works of Jacques Lipchitz and Henri Laurens. He was also influenced by African art which resulted in his first important sculptures, Man and Woman and Spoon Woman. “These totemic sculptures consist of radically simplified forms; their rigid frontality and use of male and female nudes as sexual types or symbols were to have long-lasting implications for Giacometti’s later work.”

Giacometti’s first period of significant creativity began in 1927 and over the next seven years, he created sculptures in a wide variety of styles. During this year, he exhibited his sculptures for the first time at the Salon des Tuileries in Paris and in Switzerland at the Galerie Aktuaryus in Zurich. In 1928, Giacometti met André Masson and from 1930 to 1935, he was a participant in the Surrealist circle. His first solo show took place in 1932 at the Galerie Pierre Colle, Paris and in 1934, he had a solo show at the Julien Levy Gallery in New York.

“Giacometti emerged as the Surrealists’ most innovative sculptor, extending the parameters of sculpture both conceptually and stylistically. In addition to modelling in plaster, he made constructed sculptures with varied and fragile materials, for example suspending elements such as plaster or glass in delicate structures of extremely thin wood and string. In nearly all his Surrealist sculptures, empty space plays an active role, both compositionally and psychologically.”

From 1930 to 1936 Giacometti participated in many exhibitions around the world, including Galerie Pierre, Paris, Museum of Modern Art, New York, New Burlington Galleries, London, and others in Brussels, Zurich and Copenhagen. However, in 1935 he rejected Surrealism to return to representational art based on study from life.

In the early 1940s, Giacometti became friends with Simone de Beauvoir, Pablo Picasso, and Jean-Paul Sartre. From 1942, Giacometti lived in Geneva, and associated with the publisher Albert Skira. In late 1945, he returned to Paris where he began his second period of intense creativity. His best-known post-war sculptures portray single or grouped figures, all startlingly skeletal in proportions and often mounted on large or heavy bases.

“Giacometti’s figures, with their seeming emaciation, anonymity and isolation in space, immediately struck a responsive chord in critics and collectors. His sculptures were perceived as appropriate metaphors for the human condition of post-war Europe: the horror of the concentration camps, displaced persons, destroyed lives. On a more philosophical level, critics also viewed Giacometti’s art as Existentialist, an interpretation introduced by Sartre in his two essays on Giacometti’s art.”

During this period,  Giacometti drew constantly and painted regularly. “His drawing style consisted of rapidly executed, often continuous lines that swirl around, over, and through his subject, never quite defining it yet conveying a sense of its mass and mystery. The earliest post-war drawings have heavy reworkings, often obscuring facial features in an expressionist vortex of lines. Around 1954, he expanded his drawing scope. His pencil drawings of portraits, nudes, still-lifes and interiors from the mid-1950s display a fusion of power and delicacy, as lines interweave in geometrically structured traceries overlaid with darker smudgings and greyed shadows in a ceaselessly moving realm where nothing appears solid or stable.”

Giacometti’s post-war work brought him international acclaim. Between 1948 and 1958, he exhibited several times at the Pierre Matisse Gallery in New York and at Galerie Maeght in Paris. Museums acquired his work, and the Kunsthalle in Berne held a one-man show in 1954. In 1955, he had separate retrospectives at the Arts Council Gallery in London and the Solomon R. Guggenheim Museum in New York.

Public fame took up a great amount of Giacometti’s time in the last years of his life. Collectors, dealers, young artists, curators and the media flocked to his studio. He received the Sculpture Prize at the 1961 Carnegie International in Pittsburgh and the Grand Prize for Sculpture at the 1962 Venice Biennale. In 1965, exhibitions were held at the Tate Gallery, London, the Museum of Modern Art, New York, the Louisiana Museum, Humlebaek, Denmark, and the Stedelijk Museum, Amsterdam. That same year, he was awarded the Grand Prix National des Arts by the French government.

On January 11, 1966, Alberto Giacometti died of complications from pericarditis (heart disease)  in Chur, Switzerland. His body was returned to his birthplace of Borgonovo, Swizterland where he was interred close to his parents. 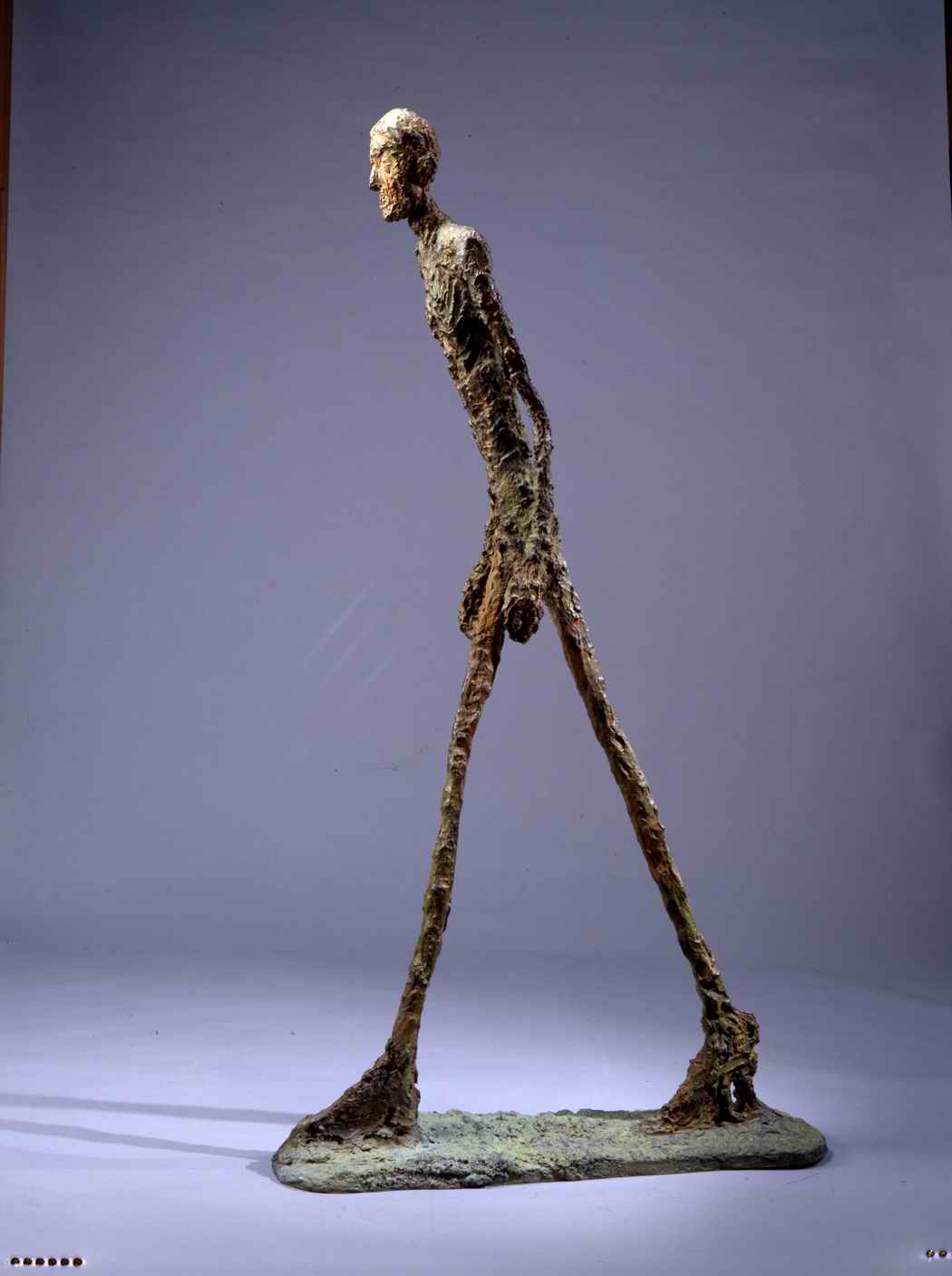 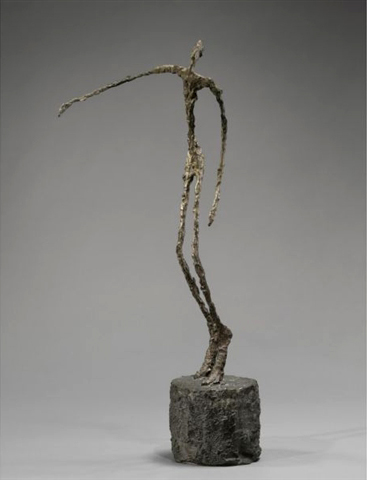 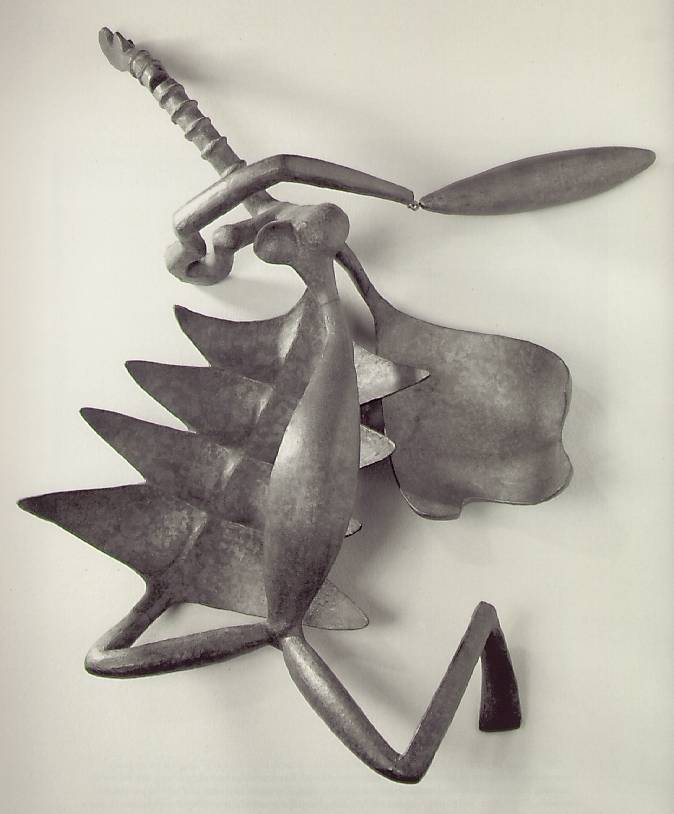 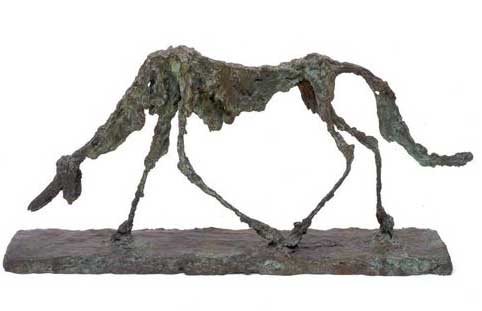 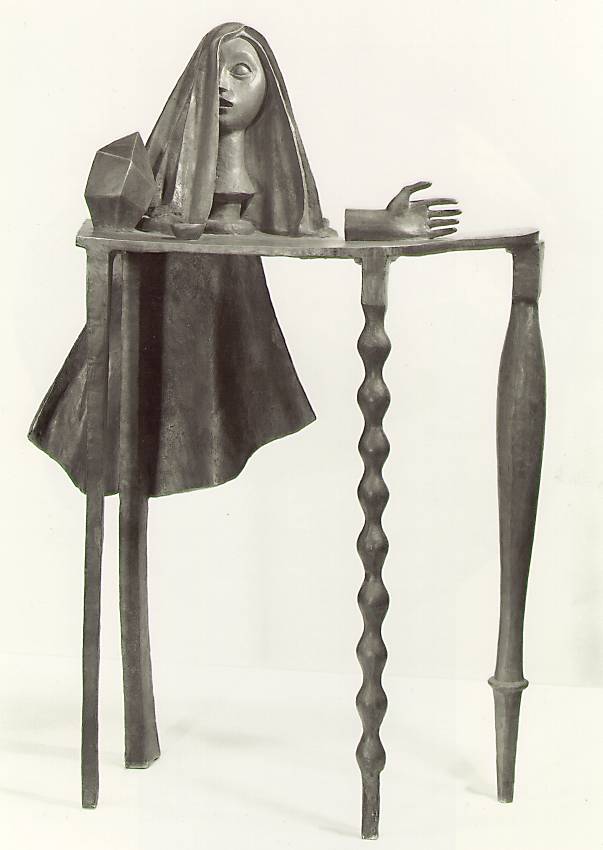 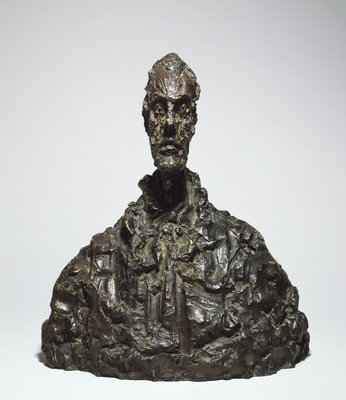 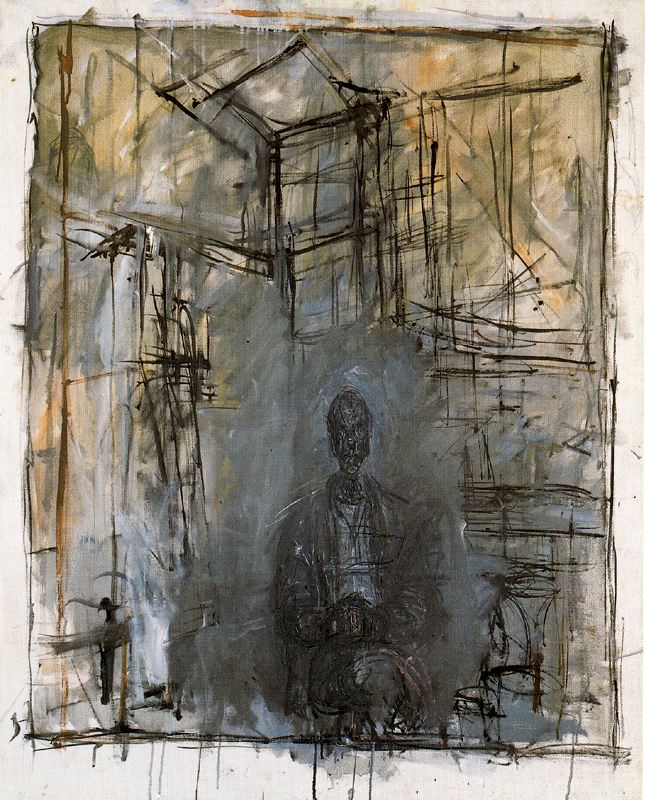 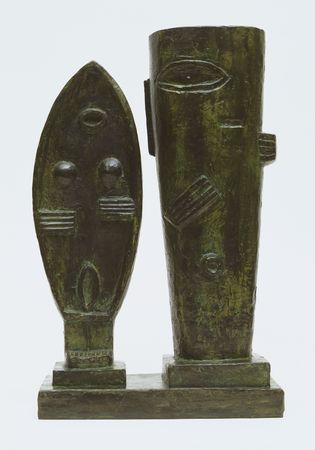 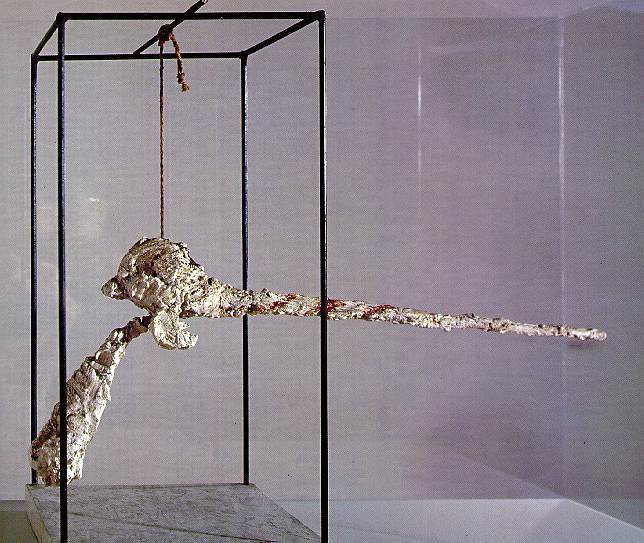 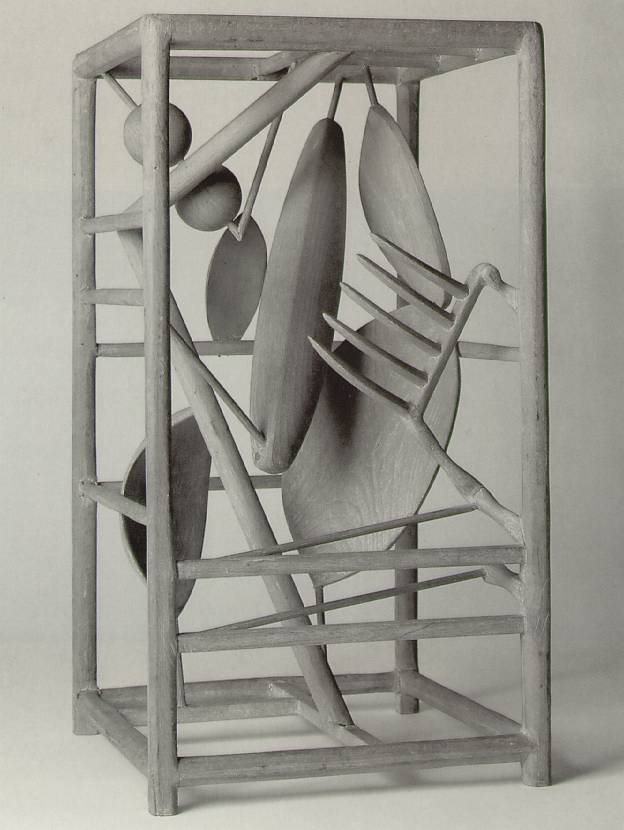 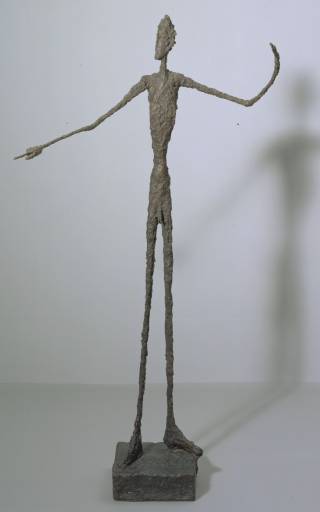 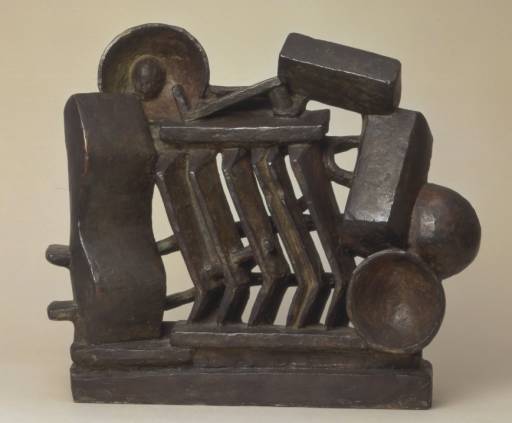 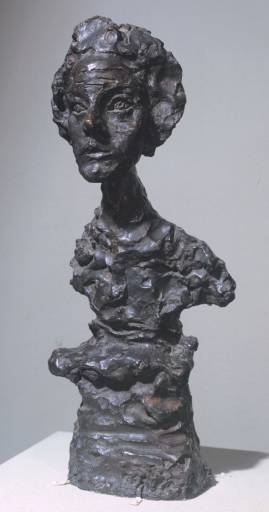 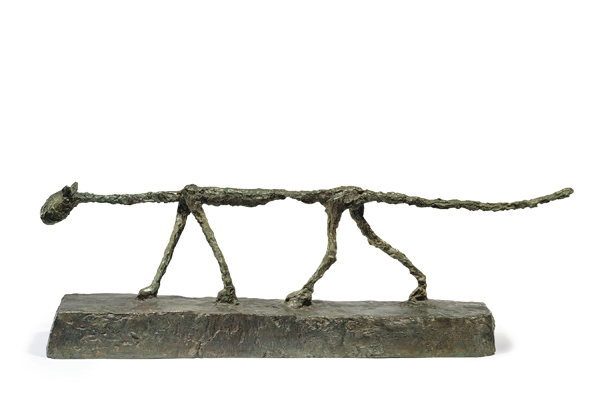 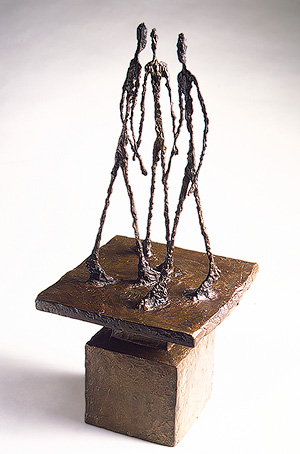