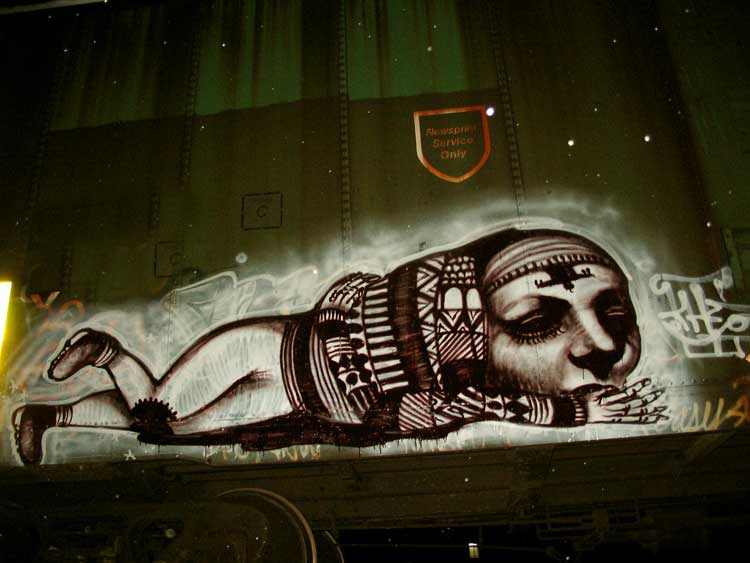 “Canadian Troy Lovegates aka Derek Mehaffey aka Other began painting on the streets around 1988 after noticing graffiti on the buildings in Toronto that would magically appear overnight. Also around this time he developed a love for rail travel, therefore it was natural for him to begin displaying his art on trains. His rail work became part of a nomadic culture that stretches as far back as the 1800s. Transients, train workers, and soldiers originally developed the tradition of inscribing their names on the trains they used to roam around the country. Many of the tags that remain on trains still in use today, but now new forms of art have been added to the boxcar walls as well.

Troy Lovegates’ train work consists mainly of black and white outline portraits with exaggerated facial features. Some of the more complex pieces resemble his street murals which are large-scale, multimedia paste-ups created in his studio and then adhered to outdoor surfaces under the guise of nighttime. His train pieces are influenced by many uncontrollable factors, all of which add to the urgency of the art form. Often times there are people working in the train yards which makes it difficult to focus on one piece for too long.

In order to fund his train work, Troy Lovegates exhibits his art in galleries. To date, he has painted pieces and had art shows in Taipei, Tokyo, Paris, Dublin, San Francisco, Los Angeles, Austin, Detroit, Montreal, Toronto, Dublin, Barcelona, Lima and many more cities around the world. His international work has occupied many canvases, from gallery walls to a projection on the side of the Romanian Palace of the Parliament, the largest building in Europe.” (from Anteism)

Lovegate recently published his book  Other: The Artwork of Troy Lovegates through Anteism Canadian arts publisher.

To see more, check out Lovegates’ photostream on Flickr. 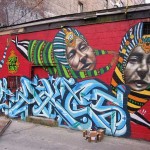 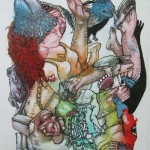 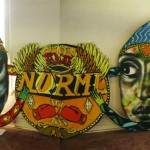 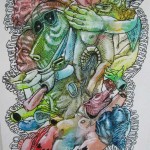 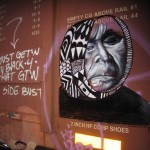 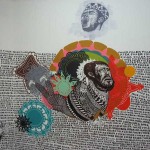 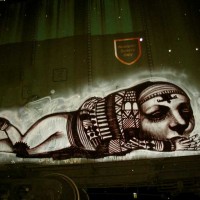 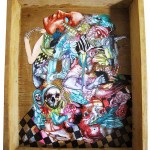 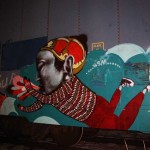