Born on May 21, 1471, in Nuremberg, Germany, Albrecht Dürer was a painter, printmaker, theorist, and one of the most important figures of the Northern Renaissance.

Dürer first trained in his father’s shop as a goldsmith. In 1486, he apprenticed with the painter Michael Wolgemut where he produced his first dated painting of his father in 1490. Upon completing his apprenticeship, Dürer followed the German custom of taking Wanderjahre, where an apprentice learns skills from craftsmen in other areas. It is thought that his travels included the Netherlands, Cologne, and parts of Austria. He returned to Nuremberg in late 1494 and married Agnes Frey on July 7 of that year.

After visiting Venice in 1495,  Dürer intensely studied mathematics, geometry, Latin, and humanist literature. He began his career primarily as a printmaker. While he did paint, “painting was less profitable, and Lutheran church reformers disdained most religious artworks.” Dürer gained success quickly and his woodcut series, “The Apocalypse” of 1498 made him famous throughout Europe. It was the first book entirely produced by an artist and included fourteen woodcuts illustrating the Book of Revelation. “Its vivid imagery, masterly draftsmanship, and complex iconography established his reputation.”

Dürer visited Italy again from 1505-07 after which his art began to assimilate Renaissance principles. From 1511-1514, Dürer worked mainly on wood and copper engraving. The major work produced in this period was the thirty-seven subjects of the “Little Passion” on wood, published first in 1511, and a set of fifteen small copper-engravings on the same theme in 1512.

In 1513 and 1514 Dürer created his three most famous works in copper-engraving; “The Knight and Death”, “Melancolia, and St. Jerome in his Study”. “Unlike his earlier, more Gothic woodcuts, Dürer’s engravings of 1513 and 1514 suggest the influence of Italian Chiaroscuro and were conceived in painterly terms, using a range of velvety tones rather than lines.”

From 1515-1520 Dürer produced a variety of works including commissions from Emperor Maximilian I, tempera on linen portraits, numerous engravings, and experiments in etching on plates of iron and zinc.

In the final years of his life, Dürer concentrated more on his theoretical writings including Teaching of Measurements (1525) and Various Instructions of the Fortifications of Towns, Castles and Large Villages (1527). His final work, Four Books on Human Proportion, was published posthumously on October 31, 1528.  Dürer produced some painted and engraved portraits during this time, but his major work was the Four Apostles, in 1526, which was presented to the city council in Nuremberg.

Albrecht Dürer died on 6 April 1528, possibly as a result of a malarial infection contracted in 1521 during a trip to the Netherlands. He is buried in the Johannisfriedhof cemetery in Nuremberg.

Dürer had a great influence on the next generation of artists. “His watercolours mark him as one of the first European landscape artists, while his ambitious woodcuts revolutionized the potential of that medium. Durer’s introduction of classical motifs into Northern art, through his knowledge of Italian artists and German humanists, have secured his reputation as one of the most important figures of the Northern Renaissance. This is reinforced by his theoretical treatise which involve principles of mathematics, perspective and ideal proportions. Himself influenced by the work of Mantegna, Leonardo and Giovanni Bellini, he in turn influenced many Italian artists through his prints.”

For a full biography and to view Durer’s complete works, visit Albrect Durer.org, or view the source links below. 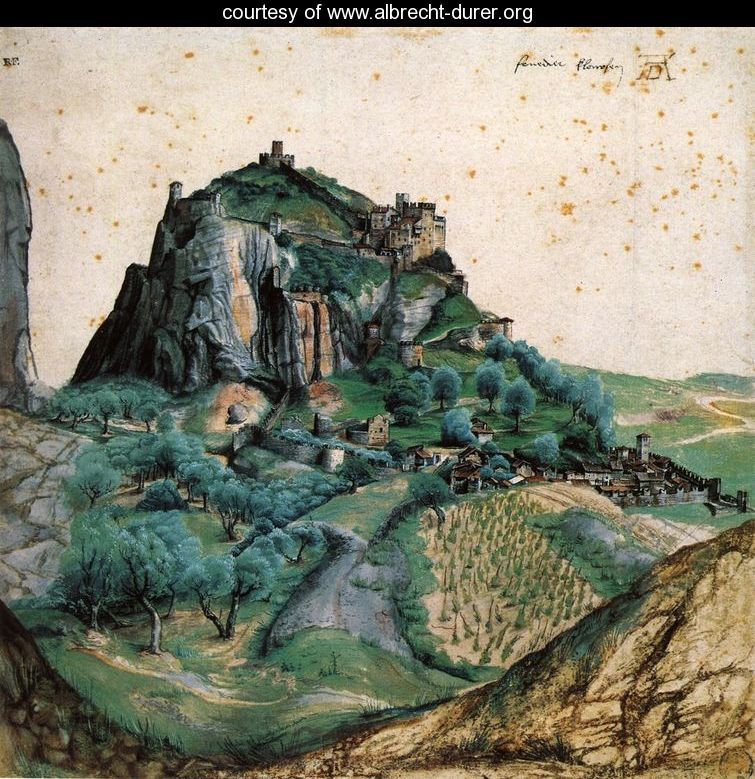 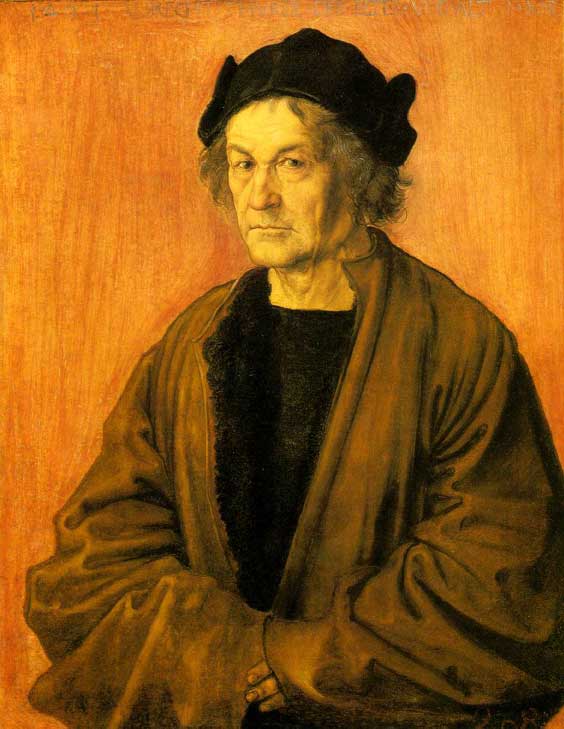 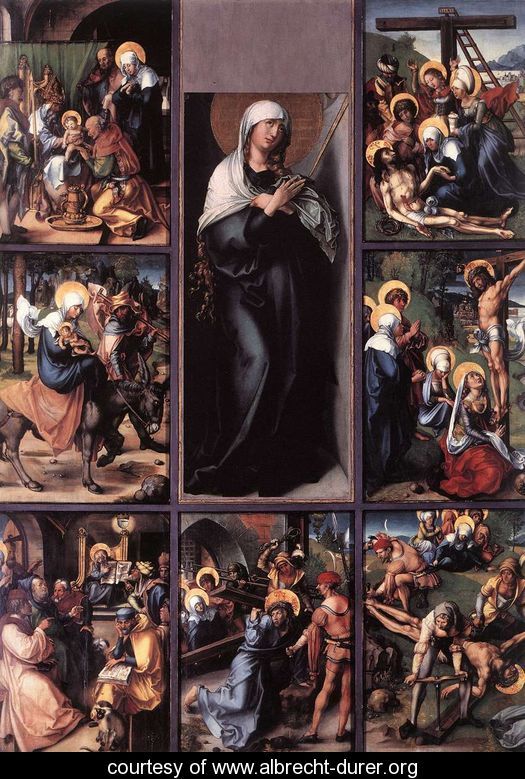 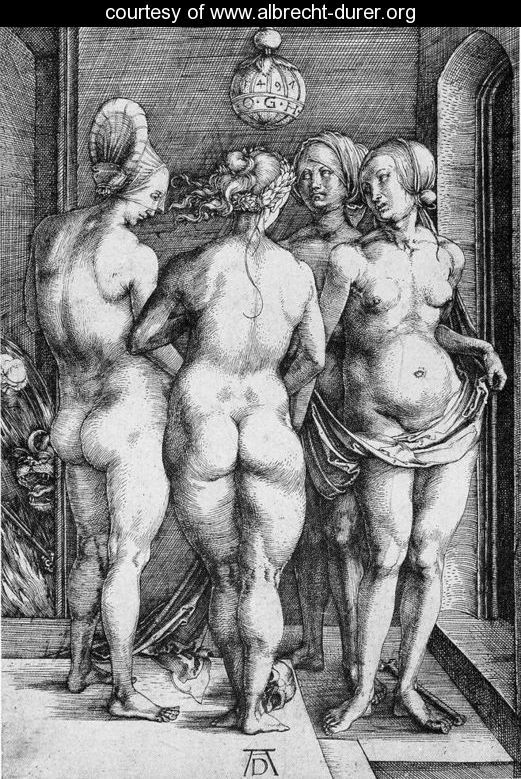 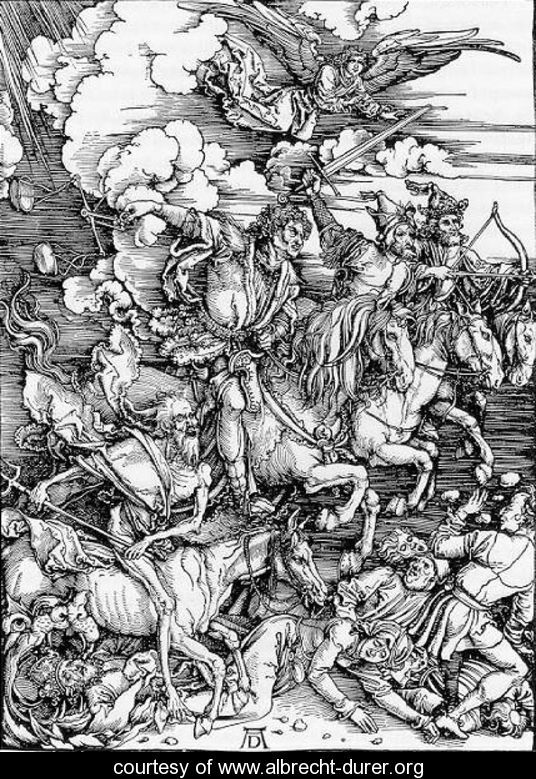 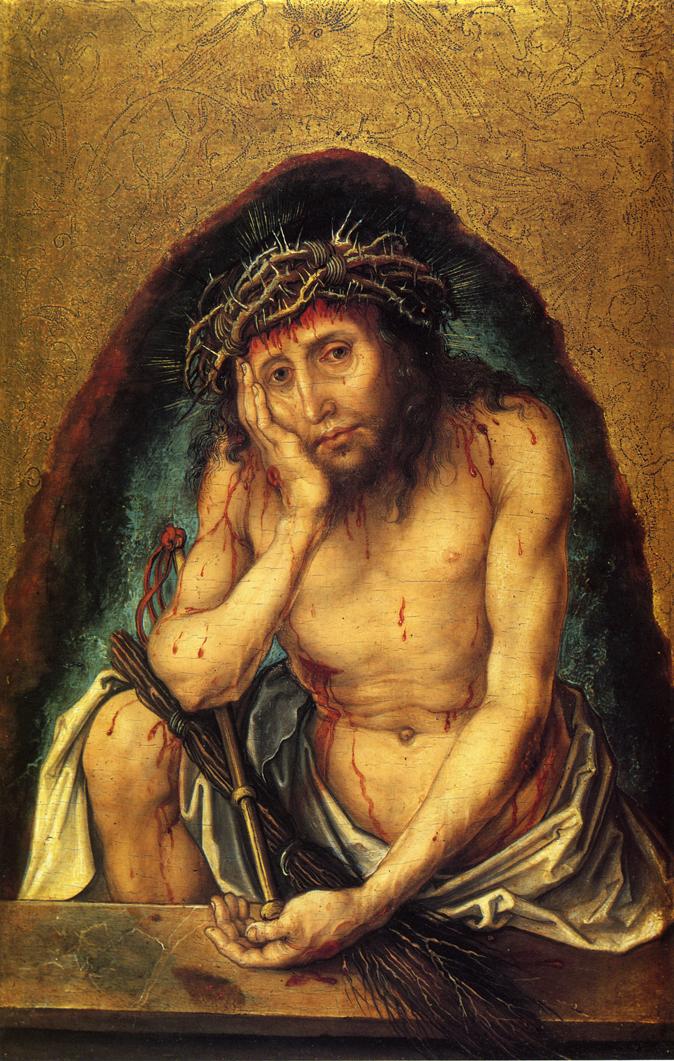 Christ as the Man of Sorrows - Albrecht Durer-1493 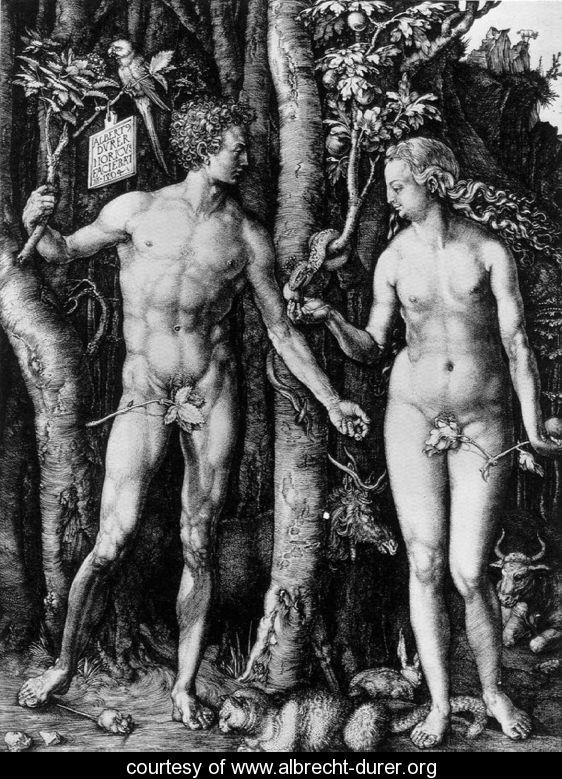 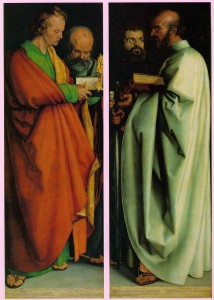 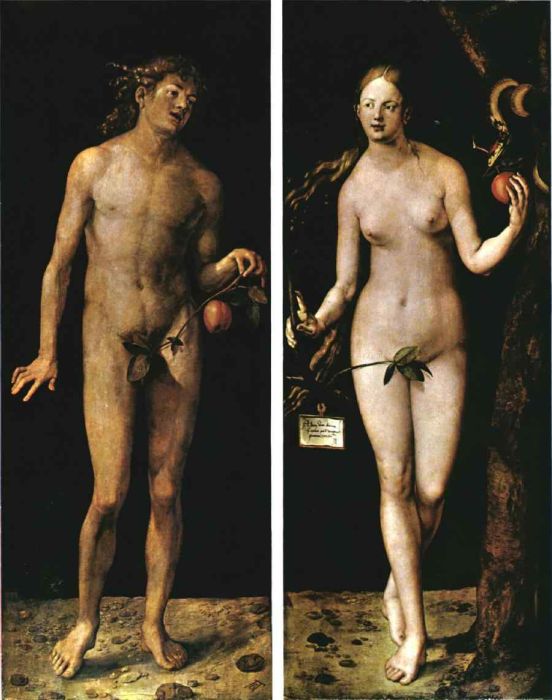 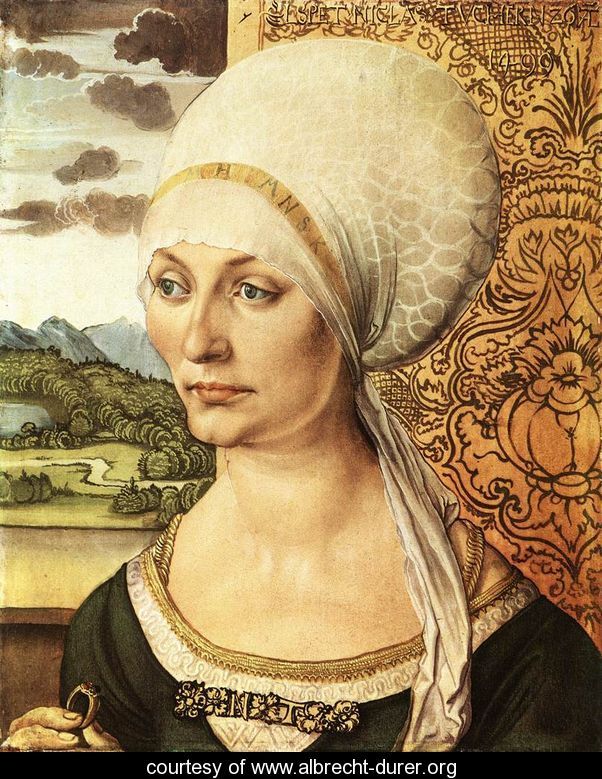 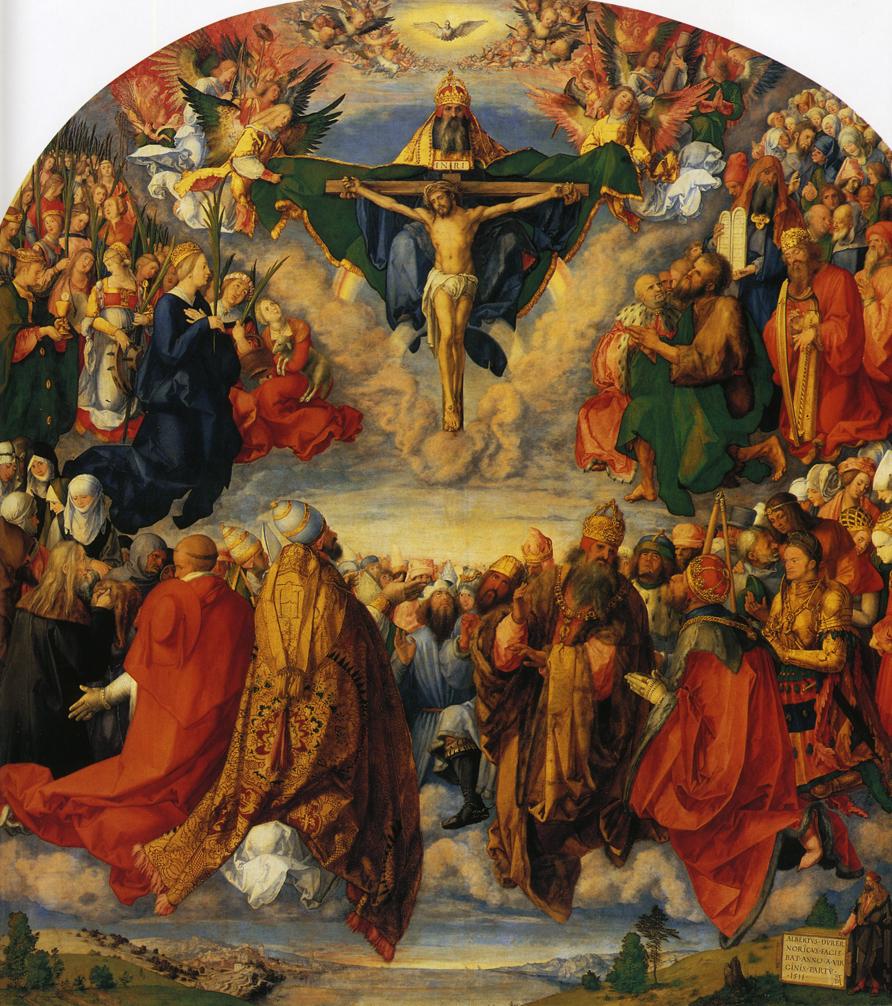 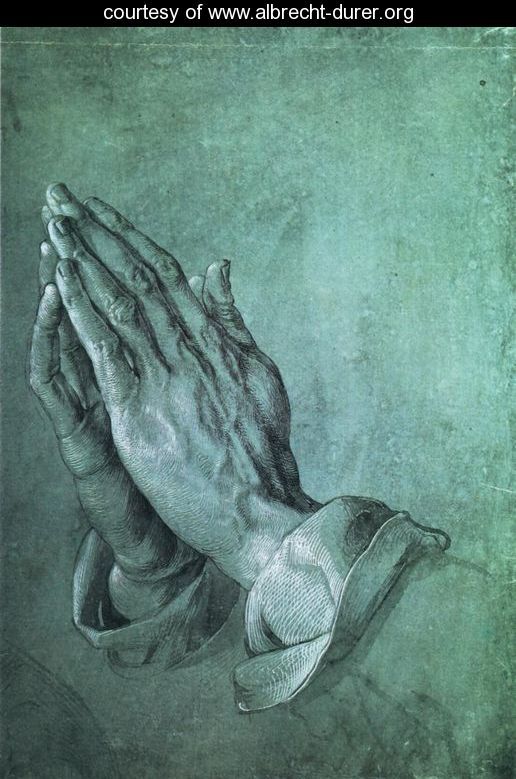 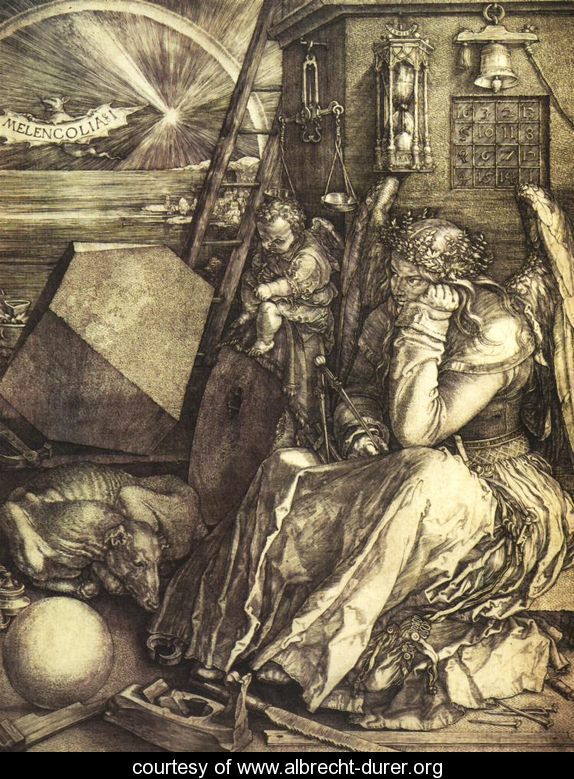 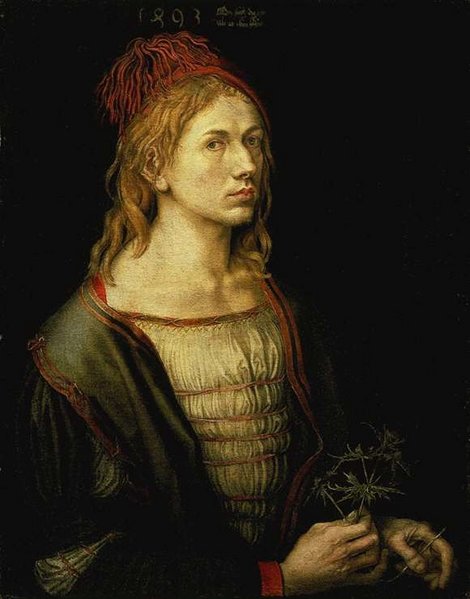 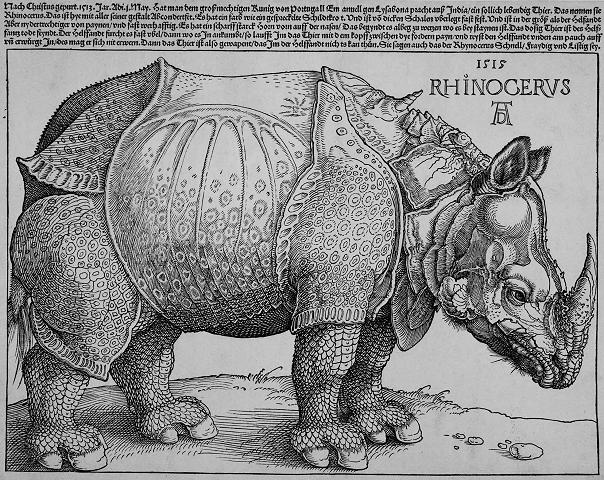 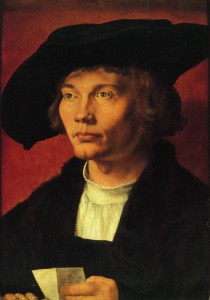 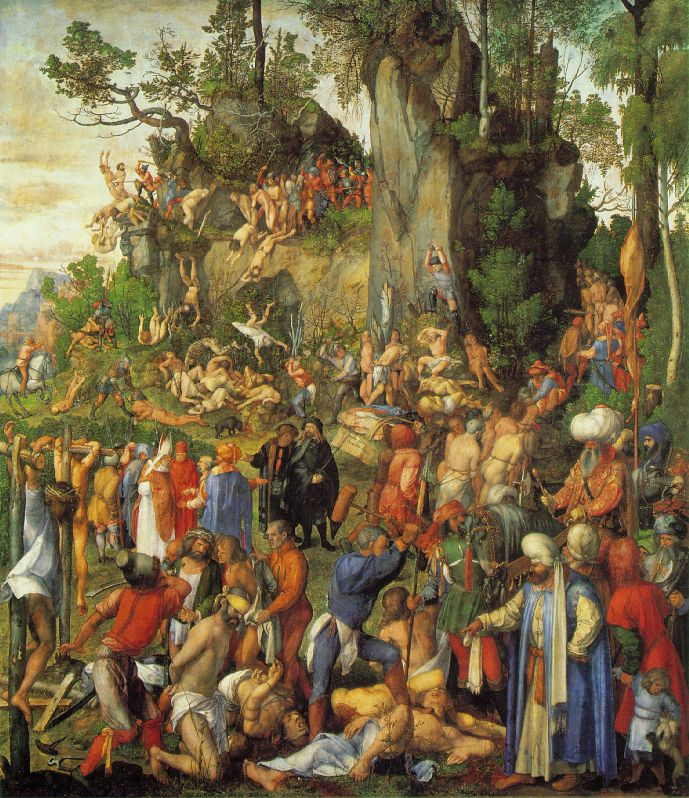 The Martyrdom of the Ten Thousand-Albrecht Durer- 1508 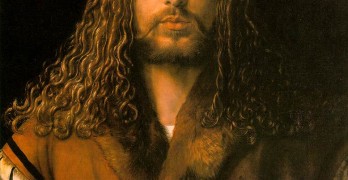 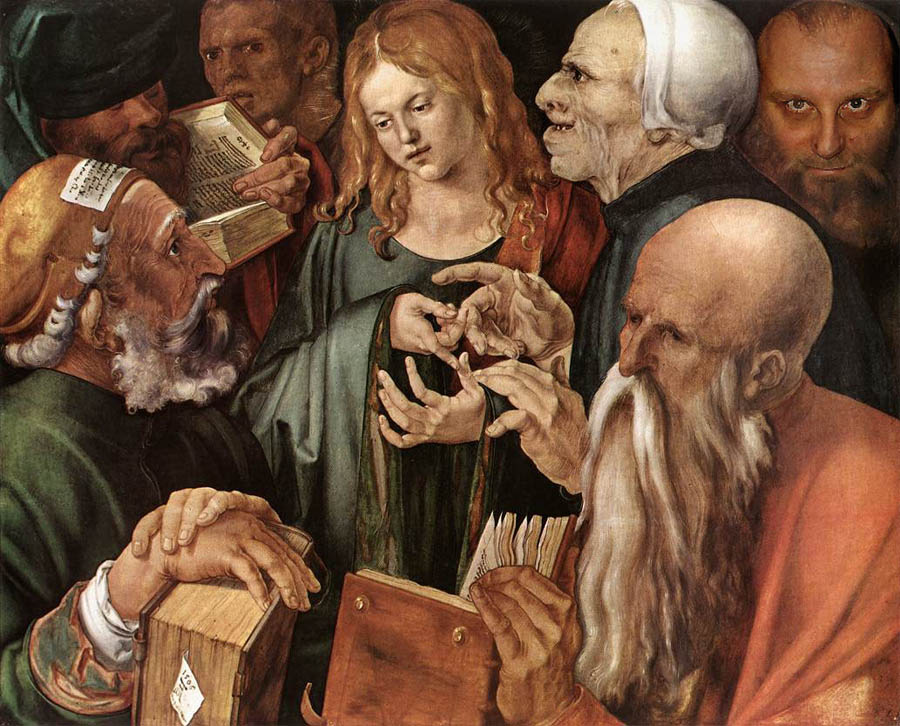 Christ Among the Doctors - Albrecht Durer-1506