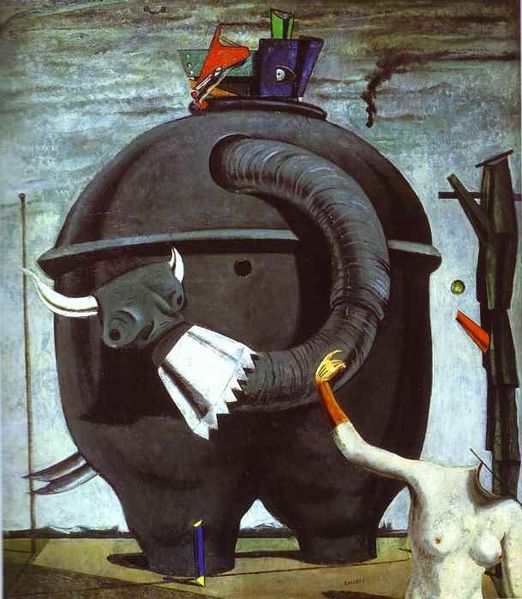 Max Ernst was born on  April 2, 1891 in Brühl, Germany. A prolific artist, Ernst is considered to be one of the primary pioneers of the Dada movement and Surrealism.

Ernst studied philosophy at the University at Bonn in 1909 and was influenced by the ideas of Freud, Nietzsche and the  Max Stirner.  In 1911 Ernst became associated with August Macke and joined the Rheinische Expressionisten group in Bonn. He exhibited for the first time in 1912 at the Galerie Feldman in Cologne.  In 1913 he met poet Guillaume Apollinaire and Robert Delaunay and traveled to Paris. In 1914 he met Jean Arp, who was to become a lifelong friend.

From 1914-1918, Ernst served in the German Army.  He continued to paint, influenced semi-Cubist, semi-abstract motifs following Delaunay, Arp and Apollinaire.  “Like many German writers and artists he was scarred by his experience of the war; it led him to reject the values of his family and class and to join in with the provocative, critical stance of the Dada movement.”

Ernst married art historian Louise Strauss in 1918. Between 1919 and 1920,  he collaborated with Johannes Baargeld in Cologne on an exhibition and a series of publications similar in style of the Dada activities in Zurich and Berlin. In 1922, Ernst left his wife and child and moved illegally to Paris, where he lived and collaborated with French poet Paul Elouard and his wife Gala.

“After 1918 Ernst rarely employed conventional techniques in his paintings. His early work shows that he was a technically skilled painter and draughtsman. Between 1918 and 1924 virtually all his paintings and prints were based on the principle of collage, and this practice remained central to his later work. Ernst’s major paintings of 1921–4 do not employ collage, but their composition is based on the collage principle.  Ernst’s definition of collage as ‘the culture of systematic displacement’ and ‘the exploitation of the chance meeting of two distant realities on an unfamiliar plane’”

From 1925-1927, Ernst developed the  frottage technique which he said was a form of automatism. In 1926, he produced a series of drawings called Histoire naturelle that he exhibited and published. “The drawings were made by placing sheets of paper over different objects such as floorboards and leaves, and rubbing with a stick of graphite. Through precise selection, combination, control of texture and some discreet additions, he was able to build up delicate, surprising images of fantasy landscapes, plants and creatures. He adapted this fundamentally simple technique to painting in the form of grattage, by which textures and patterns were made through simultaneously rubbing and scraping off layers of paint. Representational forms were then extracted from the whole by means of overpainting.”  Ernst used variations on the technique in most of his paintings for the next several years, especially in the Forest series.”

Ernst held successful exhibitions between 1925 and 1928, and became a “fashionable” artist in Paris. In 1926 he painted sets for Diaghilev’s production of Prokofiev’s Romeo and Juliet in collaboration with Joan Miró.  In 1927, Ernst married Marie-Berthe Aurenche and painted After Us—Motherhood, using calm, harmonious forms and warm colours. “This painting, along with the three versions of Monument to the Birds,  illustrates Ernst’s growing preoccupation with bird imagery during this period.”

In 1929, Ernst renewed his interest in collage producing the  ‘novel’, La Femme 100 têtes (‘The woman with 100 heads’). The book consisted of 124 captioned pictures which were made by adapting images taken from late 19th-century illustrated magazines. From 1929 to 1932, Ernst also created a series of collages featuring ‘Loplop, the Bird-Superior’. “In these and other collages Loplop represents the artist himself and presents a sequence of tableaux illustrating Ernst’s technical methods and ideas.”

During this period, Ernst supported the ideas of the Surrealists. “Andre Breton’s novel Nadja and Dalí’s advocacy of the ‘paranoiac-critical’ method were important background influences on his work. Ernst renewed his solidarity with the group in his collage Loplop Introduces Members of the Surrealist Group.”

From 1925 to 1931 many of Ernst’s works carried imagery that was “violent and menacing. This aspect of his work became more prominent after 1933, partly in reaction to the political and social climate of the time.”  Ernst (as well as many other German artists and writers) was condemned by the Nazi cultural authorities.

During the 1930s Ernst became increasingly well known. He exhibited at the Julian Levy Gallery in New York and in 1936 and 1938, participated in the large international Surrealist exhibitions in London, New York and Paris.

At the outbreak of WWII,  Ernst was interned as an enemy alien. With the help of Peggy Guggenheim, was able flee to New York in July 1941. Ernst married Guggenheim in 1942 and became a leading figure among the art community in New York. His marriage to Guggenheim was short, and in  1946, Ernst married American artist Dorothea Tanning.

In New York, Ernst developed a technique using paint dripped from a suspended, swinging can and renewed his belief in the “unconscious sources of his work.” Many of his paintings of this period employ the technique of decalcomania where “rich, unpredictable patterns were obtained by either taking an impression from, or sponging, layers of liquid paint: figurative motifs were then developed by overpainting.”

In 1946 Ernst and Tanning settled in Sedona, Arizona, and in 1948, he gained American citizenship. Between 1943 and 1950 he  created a series of paintings in a controlled geometric style and produced a number of sculptures.

Max Ernst died on April 1, 1976 in Paris. He was interred at the Père Lachaise Cemetery. 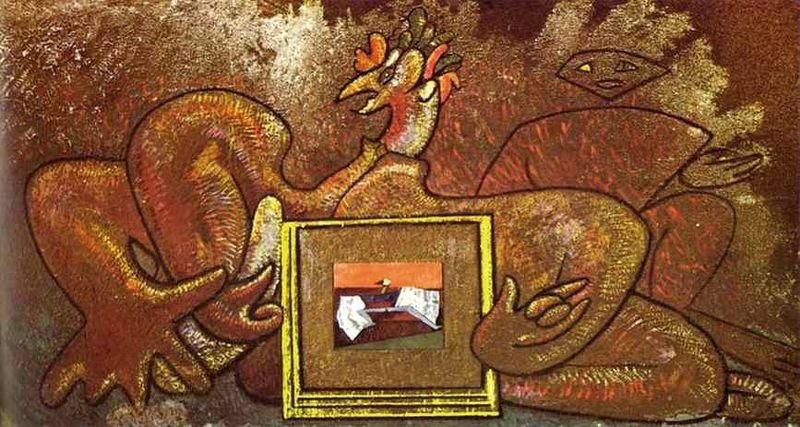 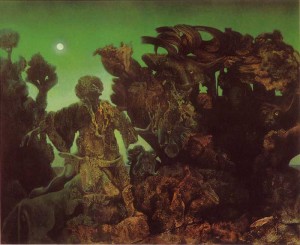 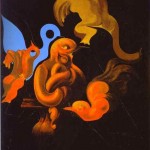 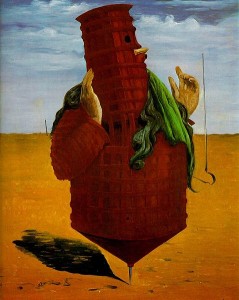 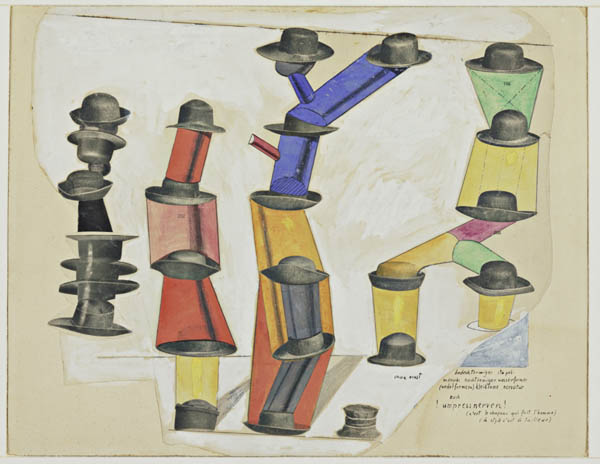 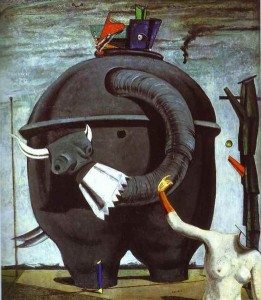 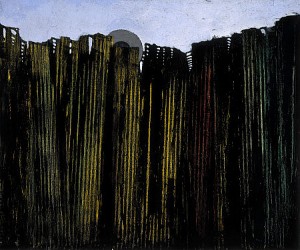 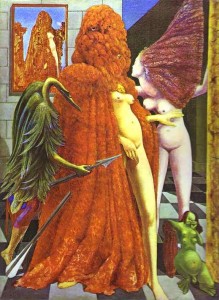 The Robing of the Bride-Max-Ernst-1940 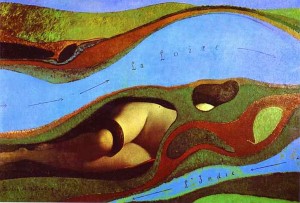 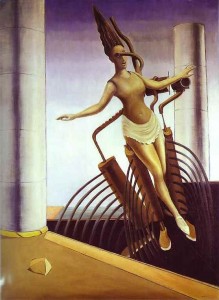 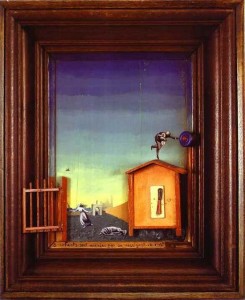 Two Children are Threatened by a Nightingale-Max-Ernst-1924 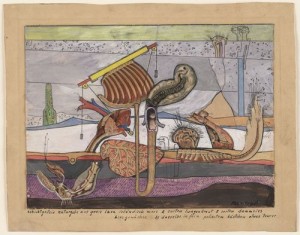 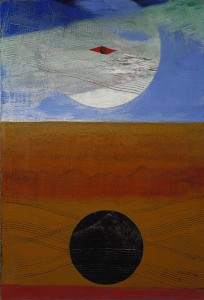 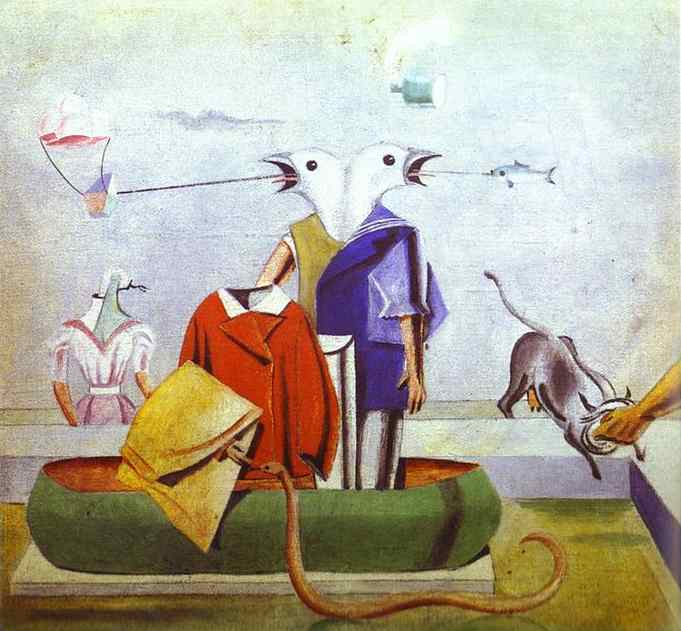 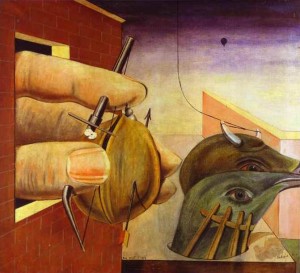 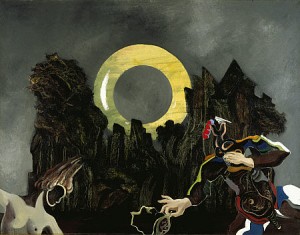 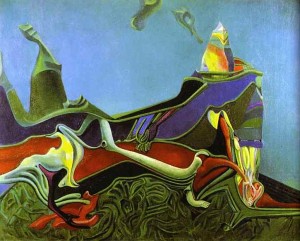 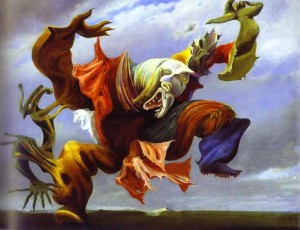 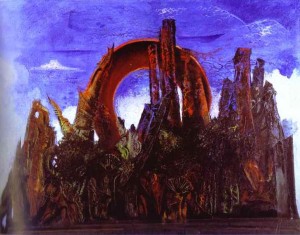 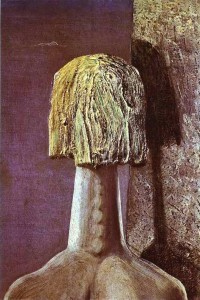 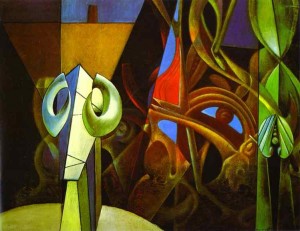 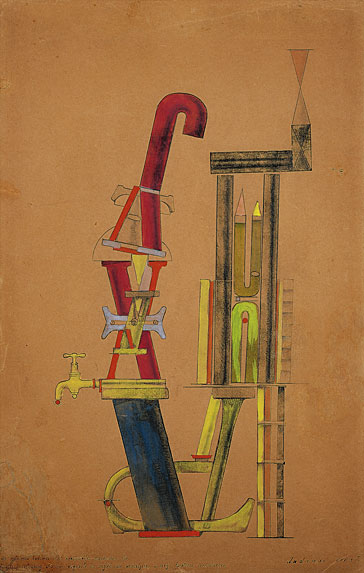 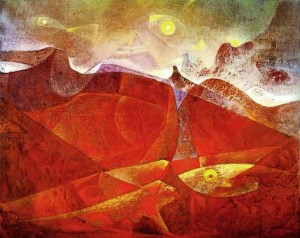 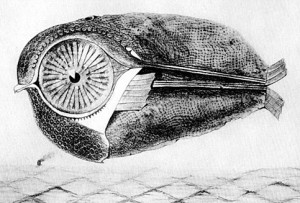 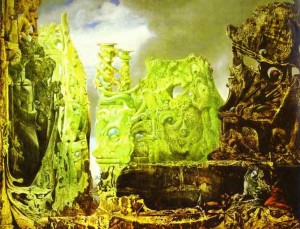 1. Macro Photography is photography that is 1x magnification(1:1) or greater. For example, an insect that is 1/2 an inch when photographed on film at “life size” , it will take up 1/2 an inch on a piece of 35mm film. Macro photography allows us to experience what we would normally fail to notice with the naked eye.  Up close, the eye of a lizard becomes a beautiful textured landscape, a tiny dust mite becomes what could be a creature out of a sci-fi movie, the fly on the wall seems to have an expression on its face.

2. En Plein Air is a French expression which means “in the open air”, and is particularly used to describe the act of painting outdoors. French Impressionist painters such as Claude Monet, Camille Pissarro, Vincent van Gogh, and Pierre-Auguste Renoir advocated en plein air painting, and much of their work was done outdoors, in the diffuse light provided by a large white umbrella.  The popularity of painting en plein air increased in the 1870s with the introduction of paints in tubes which were easy to transport.

3. Frottage is a technique developed by German artist Max Ernst in 1925. Drawings were made by placing sheets of paper over different objects such as floorboards and leaves, and rubbing with a stick of graphite. Through precise selection, combination, control of texture and some discreet additions, he was able to build up delicate, surprising images of fantasy landscapes, plants and creatures. He adapted this fundamentally simple technique to painting in the form of grattage, by which textures and patterns were made through simultaneously rubbing and scraping off layers of paint. Representational forms were then extracted from the whole by means of over-painting.

4. Dadaism is a cultural movement that began in Zurich, Switzerland, during World War I and peaked from 1916 to 1922. The movement  involved visual arts, literature—poetry, art manifestoes, art theory—theatre, and graphic design. It concentrated its anti-war politics through a rejection of the prevailing standards in art through anti-art cultural works. Its purpose was to ridicule what its participants considered to be the meaninglessness of the modern world. In addition to being anti-war, Dada was also anti-bourgeois and anarchist in nature. Notable artists involved in the movement include: Max Ernst, Marcel Duchamp, Jean Arp, Andre Breton, and Man Ray.

5. Art Competitions formed part of the modern Olympic Games during its early years, from 1912 to 1952. The competitions were part of the original intention of the Olympic Movement’s founder, Pierre de Frédy, Baron de Coubertin. Medals were awarded for works of art inspired by sport, divided into five categories: architecture, literature, music, painting, and sculpture.

The juried art competitions were abandoned in 1954 because artists were considered to be professionals, while Olympic athletes were required to be amateurs. Since 1956, the Olympic cultural programme has taken their place.