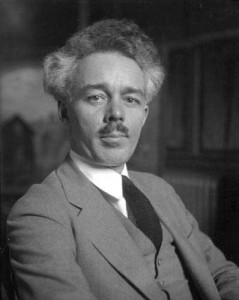 Lawren Stewart Harris (1885–1970), one of Canada’s most important and influential painters, was also the driving force behind the famous Group of Seven, and the founding member and first president of the Canadian Group of Painters. Through his life and work, he inspired three generations of artists to paint unbridled by convention, and along with his contemporaries, changed the art of a nation.

A Child of Privilege
Lawren Harris was born on October 23, 1885 in Brantford, Ontario, into a well-to-do and well-connected family. “The unusual name Lawren was the consequence of parental compromise: his mother wanted to call him Lawrence; his father preferred Lorne.” His grandfather had founded a farm machinery business which merged in 1891 with a rival company and become the giant manufacturer Massey-Harris Co. Ltd. His father, Thomas Morgan, worked as the secretary of the business and his mother Annie was a minister’s daughter. The family was Baptist and Lawren’s childhood was spent in an affluent and religious household.

When Lawren was just nine, his father died of kidney failure and the family moved to Toronto. Lawren attended St. Andrew’s College, a private boy’s school, Central Technical School and the University of Toronto. From his early years he had a penchant for art and during his teenage years, and on, he painted incessantly, searching for his own style and meaning in art. In 1904, he travelled to Berlin, Germany to further his art studies. Over the next four years he took advantage of his liberty to pursue whatever attracted him and he took up the violin, sketched on the banks of the Spree, and went hiking in the Alps.

A Wealthy Young Man and Ardent Artist
In 1908, Harris returned to Canada, a young man confronted and grappling with profound juxtapositions.  He belonged to the wealthy establishment and yet railed against convention. He was raised as a Christian but had been introduced to theosophy in Germany. He saw his country as new and modern, and yet the art of the time was a traditional European-style. He was an artist dedicated to his craft, yet he did not have to struggle to survive as did many of his contemporaries. He was a rich man capable of collecting the best art on offer, but he strove to be an artist who could, through art, change the way his countrymen saw and depicted Canada.

For the next two few years, as always unrestricted by financial concerns, he sketched in the Laurentians, in  Haliburton and in Lac-Memphrémagog, Québec, as well as drawing and painting that which he knew well, the houses in Toronto. His Ward paintings became known for their hopeful and colourful depiction of the downtown homes that were in fact quite gray and rundown, many without running water or sewage systems. The area was a stark contrast to Lawren’s own life of luxury. While “working” as an artist, he mingled as a social equal with bankers,  industrialists and doctors, and met his future wife. Beatrice “Trixie” Phillips was a young socialite, the daughter of a millionaire, and the pair wed in 1910 and had three children—Lawren Jr., Margaret and Howard. 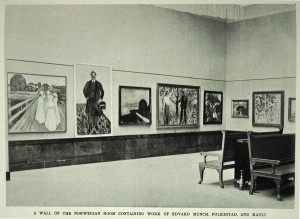 One of Lawren’s favourite places was the newly formed Arts and Letters Club, essentially an elite boys’ club for Toronto society. Many of Toronto arts establishments were conceived at the club and it was a magnet for writers and artists. One of those artists was Jim MacDonald, who launched an exhibit of oil sketches of the Canadian North which attracted Harris’s interest. He and MacDonald became fast friends and shared their mutual interest in the American transcendentalists (MacDonald had named his son Thoreau). MacDonald introduced Harris to his illustrator colleagues—Arthur Lismer, Franklin Carmichael, Frank Johnston, Fred Varley and Tom Thomson—names now associated with the Group of Seven. They also included A. Y. Jackson, a Montreal-native and fellow artist, who they met at the club. In January 1913, Harris and MacDonald took a train to the Albright Art Gallery (now the Albright-Knox) in Buffalo, to see an exhibition of contemporary Scandinavian art. That one exhibition would inspire them to create a new art for Canada, and influence their work for years to come. 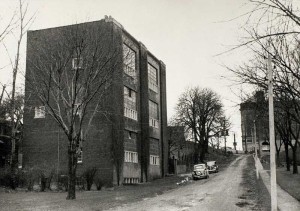 The group met regularly and synthesized around the idea of a new art movement in and for Canada. In their midst was the man who had the means to support this bold and rebellious venture. The first step was providing a place for them to work and to live if necessary. In 1913, Harris hired the architect Eden Smith to build the Studio Building for Canadian Art. The building cost $60,000, and Harris along with his crony James MacCallum, a Toronto ophthalmologist and art collector, foot the bill.

“The work they (the group) produced was visceral, vivid and controversial.”  They became known in the press as the Algonquin School (because of their paintings of the north). Critics were extraordinarily harsh at first saying that they lacked skill and that their paintings were like “a gargle or glob of porridge” and dubbed “The Hot Mush School.” by art critic H. F. Gadsby.

The First Great War
The First World War paused the work of the group. Some became war artists and others saw active duty overseas. Harris’s heart condition kept him in Canada at Camp Borden in Barrie where he taught musketry.

Already deeply saddened by the unexpected death of Tom Thomson in 1917, the death of Harris’s only sibling, Howard, a decorated veteran, in France at just 31 years old, impacted Harris profoundly. On May 1, 1918, Harris was discharged from the Army, suffering from depression, chronic sleeplessness and confusion. He found a way out through the spiritualism that he had first discovered in Germany. He joined the Toronto Theosophical Society, quit drinking and smoking, and gave lectures on theosophy and art.

A Driving Force for Canadian Art 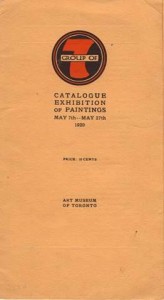 Within a month of his discharge from the army, Harris with renewed inspiration, organized the first of the “kitted-out boxcar” trips to Algoma, Ontario. Though born a privileged city boy, he loved and felt at home in the wilds of Canada. This love of the untouched landscapes reignited his passion for a new art for Canada. He fiercely believed that art could shape Canada’s identity. And to that end, he bankrolled the first official Group of Seven exhibition in 1920 at the Art Gallery of Toronto.

The last Algoma trip was in 1921, when Harris and A.Y. Jackson travelled to Lake Superior’s North Shore. Harris’s large spiritual paintings of a barren landscape, burned years earlier, became his trademark. “By the early 1920s, Harris had developed into a magnificent landscape painter… he reduced the shapes of mountains, shoreline, trees, lakes and clouds, always parallel to the picture plane, to their essentials for an austere, monumental effect.” And he was not alone in the philosophy and direction of his art. Kandinsky and American Transcendentalist writers such as Emerson and Whitman were inspiring artists internationally. “Harris’s landscapes now grew increasingly non-representational. By the late ’20s, he’d turned away from the style that made him famous and advocated on behalf of abstract art.”

In 1926, Harris joined the newly formed Société Anonyme, an organization founded by Katherine Dreier, Man Ray and Marcel Duchamp to promote avant-garde art. In their show, The International Exhibition of Modern Art, Harris’s work hung alongside that of Pablo Picasso and Georgia O’Keefe, and his was the only Canadian work included in the exhibition.

In 1930, in a letter to Emily Carr, a fellow painter, he wrote, “The true artist is outside of social recognition…. Society lives by rule, creed, what is and what isn’t done. The artist lives from within not without.” That same year Harris travelled and produced his famous paintings of the Arctic.

A Personal Scandal and Exodus
In 1934, after 24 years of marriage, Harris left Trixie to marry Bess Housser, a painter who had worked and exhibited with the group, and the wife of a school chum. The decision resulted in Harris never again residing in the place of his youth and great influence. To avoid the fallout of the scandal, the couple left Canada and moved to New Hampshire. Harris joined Dartmouth College as artist-in-residence.

In the spring of 1938 they moved again, this time to Sante Fe, New Mexico where Harris was part of the founding of the Transcendental Painting Group in 1939. In 1940, they returned to Canada, but four provinces away, to Vancouver, British Columbia. Harris visited Toronto in 1948 for a retrospective of his work at the Art Gallery of Toronto, the first ever for a living Canadian artist. Over the next three decades, his work in Vancouver continued to explore abstraction inspired by nature.

Lawren Harris died on January 29, 1970. His body is buried in a small cemetery alongside Bess, who died a few months earlier, and some of the other Group of Seven members, on the grounds of the McMichael Canadian Art Collection in Kleinburg, Ontario.

A National Legacy
In 1948 and 1963 Harris was the subject of two retrospectives. After his death, the Art Gallery of Ontario produced the exhibition Urban Scenes and Wilderness Landscapes, 1906–1930 in 1978 and in 1982–83, a national travelling exhibition of his drawings. In 2000, the first solo exhibition in the U.S. was at the Americans Society Art Gallery in New York. In 2015, a touring exhibition of Harris’ work, curated by American actor, comedian and writer Steve Martin, opened at the Hammer Museum in Los Angeles, California. Much of Lawren Harris’s work is in the collections of the National Gallery of Canada, the Art Gallery of Ontario, and the McMichael Canadian Art Collection.

Harris’s own work and the work done by the Group of Seven, supported and encouraged by Harris, is now considered to be the iconic art of Canada, just as Harris had envisioned. The group’s work is highly sought after by collectors and by the turn of the 20th century was already demanding millions at auction. The love affair with the Group seems to be ongoing. Harris’s 1930 painting “Mountain and Glacier” sold at auction for $4.6 million in 2015.

The film below, Where the Universe Sings, is an intimate portrait of the artist’s life and the expansive landscapes that inspired him. (White Pine Pictures in association with TVO) 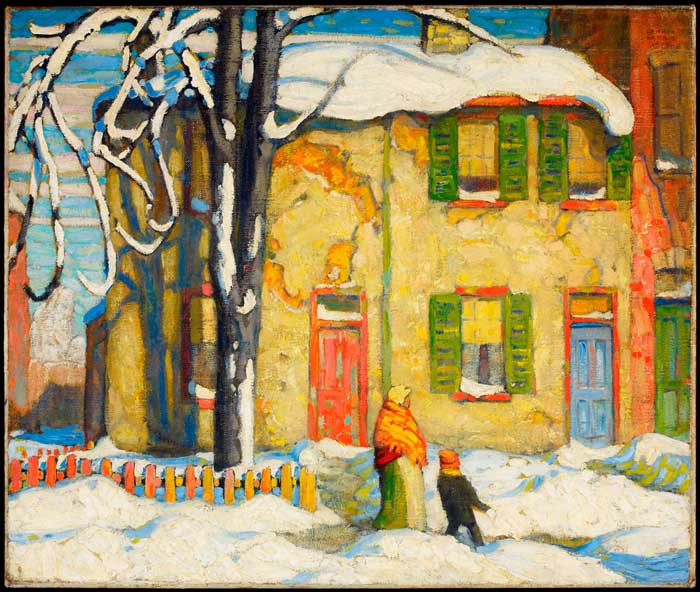 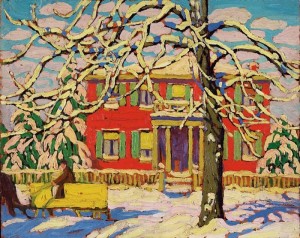 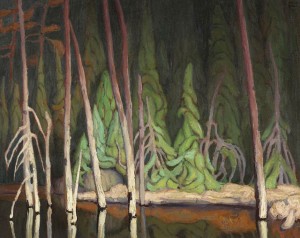 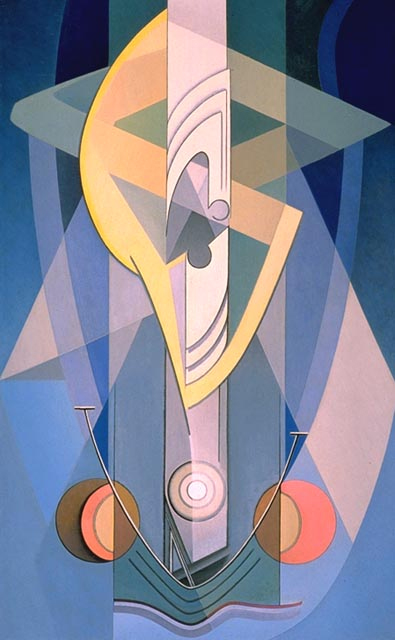 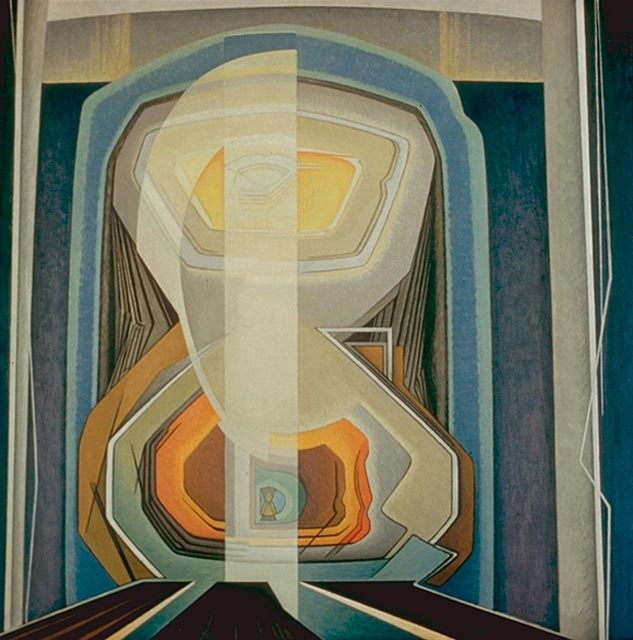 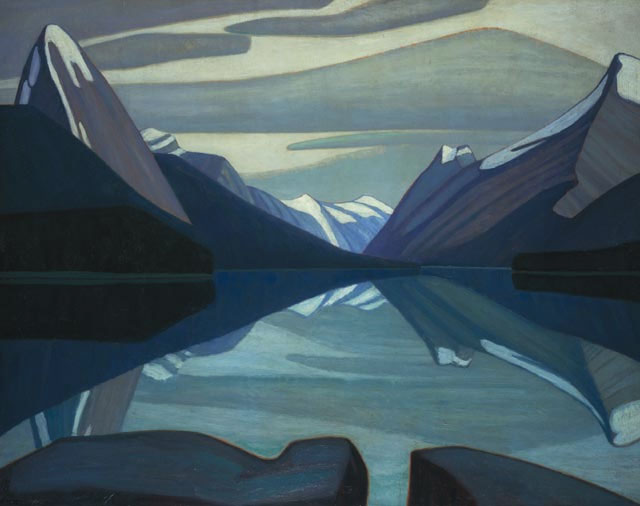 The images and videos in this post are for educational use only and may not be reproduced without the owner or copyright holder’s consent.